How Brooklyn’s Office Market Is Getting Through COVID

The pandemic has beat up on leasing and sales, but there are already signs of hope 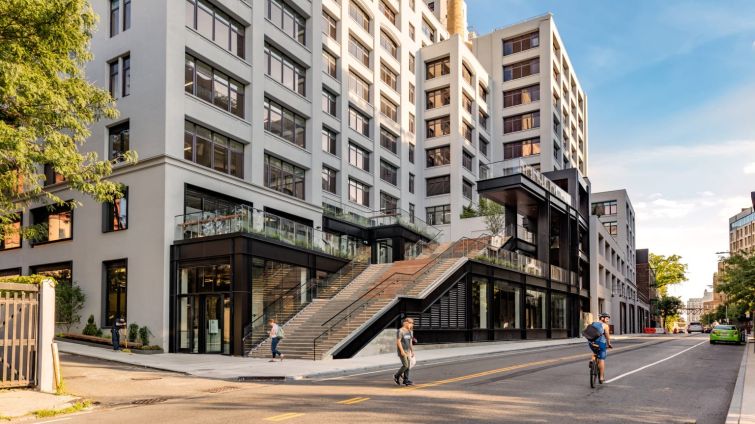 Projects such as Panorama are adding millions of square feet of office space to Brooklyn. Courtesy of Max Touhey

Brooklyn needed this like it needed a bad rash.

The office market was struggling to begin with. Then, along came the coronavirus, and all the restrictions on movement that made office leasing a challenge. It’s the same issue that’s facing its fellow borough of Manhattan, the traditional home of workplaces in New York City. But new development in Manhattan is working off a base of more than 400 million square feet of offices, not the 39 million of Brooklyn. Brooklyn has a pipeline of almost 4 million new square feet of office space by 2024.

“It was a tenant’s market a year ago, a year and change, before the pandemic,’’ said Chris Havens, managing director at TerraCRG, a Brooklyn-based commercial property brokerage. “Now it’s a tenant’s market in spades. There’s really nothing large happening.”

The numbers bear that out. TerraCRG’s own investment sales figures show a borough-wide decline in price per square foot for office/industrial properties, to $327 at the end of 2020, from $467 the same time the year before. And they show the number of sales declining to 57 from 76, as restrictions on movement made it hard to physically see the property you might want to buy.

Leasing numbers showed a similar sluggishness. The average Brooklyn office rent fell to $39.03 a square foot from $40.37, and brokerage Colliers International showed the availability rate rising in 2020 to 18.3 percent, from 15.6 percent at the end of 2019. CBRE Group, the world’s largest commercial real estate services firm, had the year-end availability rate even higher, at 22.4 percent.

What makes this remarkable, though, is not the numbers, nor is it the comparison to Manhattan, which has its own COVID-induced problems. It shows how far the reality is from the design.

For many years before the virus, Brooklyn was widely seen as a hotbed of tech and creative industry, filling up with 20-somethings eager to have workplaces closer to their new homes. It was with that optimism that developers embarked on some of New York City’s highest-profile and most ambitious projects.

These included the redevelopment of the former Jehovah’s Witnesses headquarters, now known as Panorama, into 640,000 square feet of offices and retail by the Brooklyn Bridge. CIM Group out of L.A. leads a partnership aiming to turn the complex into a creative office hub. The network of buildings is probably best known for its gigantic electronic sign, which flashed the name “WATCHTOWER” to Brooklyn Bridge motorists. The sign could be part of a leasing deal, giving an occupant a unique branding opportunity.

Then, there’s Dock 72 at the Brooklyn Navy Yard, a new 675,000-square-foot office building on a piece of land that juts right out into the East River, offering some of the best views in the city. The building, co-built by Boston Properties and Rudin Management, and the first Brooklyn project for both, is one-third occupied by WeWork, the pioneering but troubled co-working company. It had designs on making it into a center for progressive technology and creative companies, sharing the food, fitness center, and other amenities designed to appeal to young and smart college graduates.

Or, consider The Refinery. It sits near the Williamsburg Bridge as part of the former Domino Sugar plant, and is slated to have more than 600,000 square feet of offices once renovated. Two Trees Management, principal developers of Dumbo, is the developer of the mostly residential project.

Or, take nearby 25 Kent Avenue, Williamsburg’s first speculative office building in half a century, co-developed by Rubenstein Partners of Philadelphia and Heritage Equity Partners of Brooklyn, headed by Toby Moskovits, a rare female real estate developer.

Together, there is nearly 4 million square feet of new construction or major renovation scheduled to be completed in Brooklyn over the next four years, according to Colliers, coming on top of 3.73 million square feet that came online the last two years. (The developers behind these projects did not respond to requests for comment.)

Brooklyn is an active office market, but the leases tend to be smaller, 500 square feet to 2,000, TerraCRG’s Havens explained.

Havens was reluctant to talk about what it would take to fill up the aforementioned high-profile projects. He did say that the relative deals that tenants can now get in a Manhattan office market largely emptied by COVID isn’t helping.

“I believe the properties developed in the last few years for large tenants, of which there are several, will need to [sign] smaller tenants than the originally projected,’’ Havens said. “Those buildings are quiet right now, but they won’t stay that way. In this environment, why wouldn’t you take Manhattan, unless you had personal reasons? I think people need to provide spaces that fit the size of the tenants in the market.”

But, maybe it’s always darkest before dawn. Franklin Wallach, senior managing director for research in Colliers’ New York office, said that with all the talk about companies needing satellite offices for a hub-and-spoke model of tenancy, so that employees have an easier commute, Brooklyn might be well-positioned to provide that kind of office.

Nor have the educational, government and health care sectors, Brooklyn’s traditional tenancy, abandoned the borough. The largest lease in the borough in 2020 was the Whittle School, a worldwide charter school, which took 622,000 square feet at the Wheeler complex in downtown, once the Brooklyn outlet of the department store Macy’s, where development firm Tishman Speyer is redeveloping as offices with a much-smaller Macy’s store on the lower floors.

“Pre-COVID Brooklyn was at a higher availability rate compared to Manhattan at the end of 2019,” Wallach said. “Almost one-fifth of Brooklyn’s inventory is post-2000 construction, compared to Manhattan, about one-tenth. With all the inventory that has come online in Brooklyn, that is now checking many of the boxes, especially if there is going to be any hub-and-spoke, or back-office, operation for some companies; or if they are looking to completely relocate into Brooklyn, where so many of the decision-makers and the employees live.”

In the end, some areas of Brooklyn might rebound out of COVID more sharply than others and start to lean in the favor of landlords (and their brokers). The Downtown Brooklyn Partnership, a nonprofit that supports development in the area, is understandably optimistic that downtown and its so-called “tech triangle” of downtown, Dumbo, and the Brooklyn Navy Yard will bounce back robustly once the crisis lifts.

Brooklyn’s residential neighborhoods have stayed strong through the COVID situation, meaning the hypothesis for strong demand — that young creative people want to work close to where they live — remains valid, Myer said. Retail demand, as evidenced by the opening of Lululemon, Target and Trader Joe’s outlets, and the pending return of the legendary restaurant Gage & Tollner in downtown, also bode well for office demand. In general, though, traditional physical retail has suffered as the lockdowns have severely reduced pedestrian traffic.

Still, bright spots abound. The partnership reported that pedestrian traffic at the Fulton Mall downtown during the holiday shopping season was 90 percent what it was the year before, compared with Times Square, which was at 28 percent. And it put out a study in July 2020 that said that while 63 percent of Brooklyn tech firms projected revenue loss, about 20 percent, primarily venture-backed startups, reported growth. And, while about a quarter laid off or furloughed staff, about half held staff count even, and 22 percent continued hiring.

“I’m not saying it’s record-breaking here, but it has held its own,” Myer said of downtown in particular. “And I really attribute that to the strength of its neighborhoods. It’s really kept Downtown Brooklyn alive.”