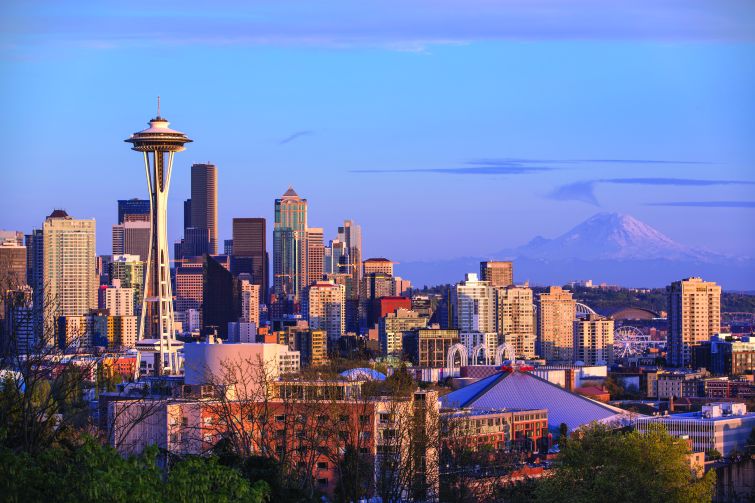 Seattle's iconic skyline with Mount Rainier in the distance. A chunk of the properties included in this Blackstone and LBA deal are located in Seattle. Credit: Getty Images

Commercial real estate industry veterans recently discussed during a Commercial Observer event that the pandemic has created a story of the “haves” and “have nots.”

LBA held on to a stake in each portfolio, and will continue to manage the assets, which are situated in last-mile areas in primary, gateway markets along the West Coast and in the Southwest.

The $944 million financing, which was originated on Jan. 21, included two first-lien mortgages accounting for the two portfolios — Fund JV ($555 million) and Fund V ($389 million). Both are secured by BREIT and LBA’s fee simple or leasehold interests in the 52 properties — Fund JV comprises 35 assets, while Fund V has 17. About $896.8 million of the financing will be securitized in the BX 2021-LBA single-asset, single-borrower CMBS transaction, as per information from Moody’s.

BREIT and LBA also struck up an interest rate cate cap, which has a strike rate of 3.75 percent or lower, per Moody’s; once the fourth and fifth extension options are underway, the spreads will jump 25 basis points.

Built between 1967 and 2019, the 35 assets in the Fund JV portfolio were about 96 percent leased to more than 100 tenants as of the end of 2020, and Moody’s concluded that the “properties appear well-maintained based on our site visits and the third-party property condition reports,” which said that the portfolio needed no immediate repairs. LBA has doled out more than $14 million for capital improvements since acquiring the properties seven years ago.

The 17 properties within the Fund V portfolio were built between 1954 and 2020, and are also well-leased — 93.6 percent as of the end of last year — to more than 50 occupants. LBA has injected about $23 million into upgrading and renovating these 17 properties since acquiring them in 2013, with those in Fund JV.

Fund V also sports a strong, diverse collection of tenants, the largest of which controls about 19 percent of its overall rentable area, while only two other tenants rent out more than 10 percent; its 10 largest make up about 1.9 million square feet, or represent just over 65 percent of its rentable space.

The properties are spread out across four states, with California hosting nearly half of them; the remaining assets are in Oregon, Arizona and Washington.

Despite the strong tenancy, which includes a range of credit tenants, both portfolios face some rollover risk during the life of the financing, which includes the bevy of extension options.