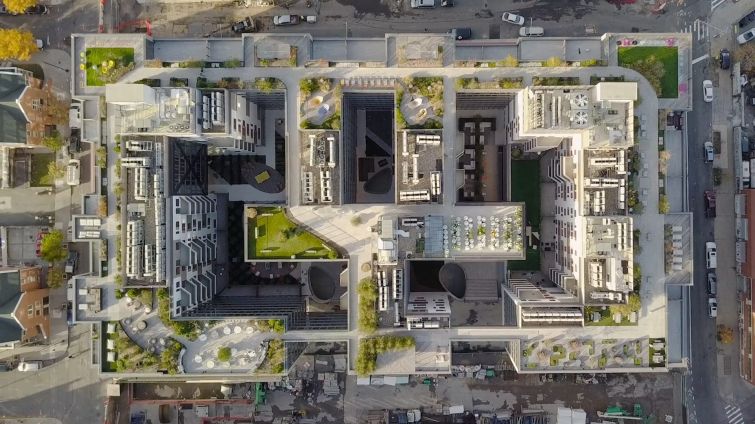 Yoel Goldman’s All Year Management has filed a petition for Chapter 11 bankruptcy in a move to stave off a Uniform Commercial Code (UCC) foreclosure sale on its Brooklyn mega-housing development Denizen Bushwick, according to a filing made late yesterday in the U.S. District Court for the Southern District of New York.

The move by Goldman’s Brooklyn-based development firm comes after failed attempts to negotiate with mezzanine lender Mack Real Estate Credit Strategies on a second extension of the date of the UCC foreclosure sale, which was scheduled to take place today following a two-week postponement. It was originally scheduled for Feb. 5.

The move was made on an “emergency basis to safeguard the value of [All Year’s] interest in the valuable Denizen properties and allow All Year to continue its negotiations,” according to the firm’s petition last night, which stated that it currently owes Mack Real Estate about $73.2 million, including principal, accrued interest and default interest, as well as a forbearance fee. The loan — made in February 2019 — is full recourse in the event of a voluntary bankruptcy filing by All Year, according to the firm.

The company filed under the entity Evergreen Gardens Mezz LLC and is represented by Manhattan law firm Weil, Gotshal & Manges.

A representative for Mack Real Estate was not able to provide a comment or additional information prior to publication.

Denizen Bushwick is a massive, luxury, mixed-use apartment development that was built in two phases between 2018 and 2019, and is situated on the former site of the Rheingold Brewery, with addresses at 54 Noll Street and 123 Melrose Street. All Year’s interest in the property is split between two entities — Evergreen Gardens I LLC (123 Melrose) and Evergreen Gardens II LLC (54 Noll Street) — which each carry a separate load of debt that had been secured to build both phases.

Mack Real Estate’s foreclosure and subsequent move to sell is on All Year’s interest in the controlling entity of 123 Melrose Street, on which it owes Mack $73 million, in addition to $170 million in defaulted senior debt to JPMorgan Chase, per the filing. A portion of the revenue that is generated at 123 Melrose is to go toward servicing what’s owed to JPMorgan Chase, using “excess cash, if any … to service its debt payments” to Mack, per All Year’s petition.

Mack first sent notice of its intention to move forward with a UCC sale in early December 2020. All Year filed a last-minute lawsuit to delay the Feb. 5 UCC sale date, and the sides agreed to the two-week postponement. Mack and All Year continued to negotiate a path out for both parties, but failed to come to agreement as it relates to the debt and the fate of Denizen Bushwick. Mack decided to not extend the date of the UCC sale any further, which sparked All Year’s bankruptcy filing last night.

Between secured and unsecured bonds, mezzanine debt and property-level mortgage debt, All Year has around $1.6 billion in outstanding debt on its $2.4 billion book of business, and as such, the firm has gone through the wringer with those obligations in the last 12 months amid COVID-19 — so far as to even be delisted from the Tel-Aviv Stock Exchange (TASE). In its bankruptcy petition, All Year claims that Denizen is very important to its ongoing internal corporate restructuring efforts and in addressing its financial stresses, and that Mack’s push to move forward with the foreclosure sale has thrown a wrench into those proceedings.

The performance and outlook for Denizen Bushwick has remained strong during the pandemic, even leading to a $670 million refinancing in late October 2020, according to information from Fitch Ratings. It sports 911 apartment units, around 100,000 square feet worth of amenities, and nearly 130,000 square feet of commercial space.

Phase I of the development was 54 Noll Street, which features 354 market rate units that started leasing in August 2018; within 14 months, it hit 95 percent stabilized occupancy, per Fitch. Phase II was 123 Melrose Street, which finished construction in 2019 and is where most of the site’s common amenities are located; as of early October 2020, the property’s 374 market rate units were nearly 85 percent leased out.

All Year claims in its petition that pandemic-related restrictions at the city and state levels hampered the Denizen, which relies on its amenities. Among those amenities is ample greenspace — a public park and a 17,850-square-foot courtyard surrounded by both 54 Noll and 123 Melrose — a dog park and pet spa, a beer brewery, a community chef’s kitchen, rooftop gardens, a cafe with coworking space, an art gallery, a game room and multiple fitness centers, per Fitch.

In late October 2020, All Year nabbed a $670 million portfolio refinancing package on 11 properties, including the Denizen, which made up 76 percent of the portfolio by allocated loan amount. The package included a $510 million first mortgage loan — $410 million of which was set to be securitized as part of the DNZN Commercial Mortgage Trust 2020-DNZN commercial mortgage-backed securities (CMBS) deal — as well as $160 million in mezzanine debt, according to information from Fitch. The debt bundle, though, went toward unraveling its TASE obligations. The firm was able to retire $375.7 million of existing secured debt, $243.9 million of secured TASE bonds, pay off unsecured TASE bonds, and fund closing costs and upfront reserves, per Fitch.

All Year’s portfolio includes more than 2,650 residential units, 94 commercial units, and 183 hotel rooms in the Brooklyn neighborhoods of Bushwick, Williamsburg and Bedford-Stuyvesant, per information it detailed in its bankruptcy petition.