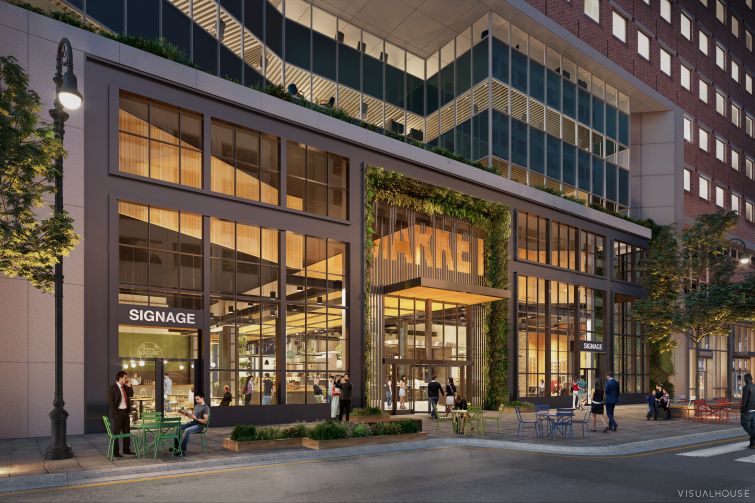 Urbanspace will open its sixth Manhattan food hall in the Financial District, replacing a public walkway that linked Water and Pearl streets, the company announced Tuesday.

Urbanspace has signed a lease for 14,722 square feet at 100 Pearl Street, which includes 12,702 square feet on the ground floor and 2,020 square feet of backroom space. The 16-stall food hall will double as a block-through walkway at the base of the 27-story office tower, part of a redesigned ground floor that replaced an outdoor covered walkway.

GFP Real Estate purchased the property, previously known as 7 Hanover Square, in 2018 for $310 million with a plan to reposition it. The property included a publicly owned private space (POPS), a covered arcade that extended from Pearl to Water streets, which the original developers had designed in exchange for an increased allowance of buildable square feet.

GFP hired S9 Architecture to redesign the public space, which had been a dark passageway, and turn it into an enclosed lobby. That move was made possible by a 2016 amendment to the zoning code that allowed property owners to convert open-air arcades into indoor commercial space.

GFP is one of the first to make use of the updated code, which was meant to address the fact that many POPS, such as the arcade at 100 Pearl, were uninviting to the public, as a review by The Municipal Art Society of New York in 2007 showed. But critics are concerned that the de Blasio administration’s 2016 update is a troubling solution because it replaces public spaces, albeit badly designed, with commercialized spaces that might also be unwelcoming, and sometimes inaccessible, to non-patrons. The 14,722 square feet includes the public area, a spokesperson for Urbanspace confirmed.

This will be Urbanspace’s sixth food hall and the second space it has leased since COVID began. Urbanspace’s other locations include 230 Park Avenue, across from Grand Central Terminal; 570 Lexington Avenue; 135 West 50th Street; and 787 Seventh Avenue. In 2020, Urbanspace announced another location at 124 East 14th Street near Union Square.

“Our team put a lot of work into reimagining 100 Pearl Street as a prime downtown location for today’s modern workforce,” GFP Co-CEO Brian Steinwurtzel said in a statement. “We believe that the addition of Urbanspace will not only be a great amenity for the tenants in our building, but will also provide a welcoming space for the rest of the surrounding downtown neighborhood.”