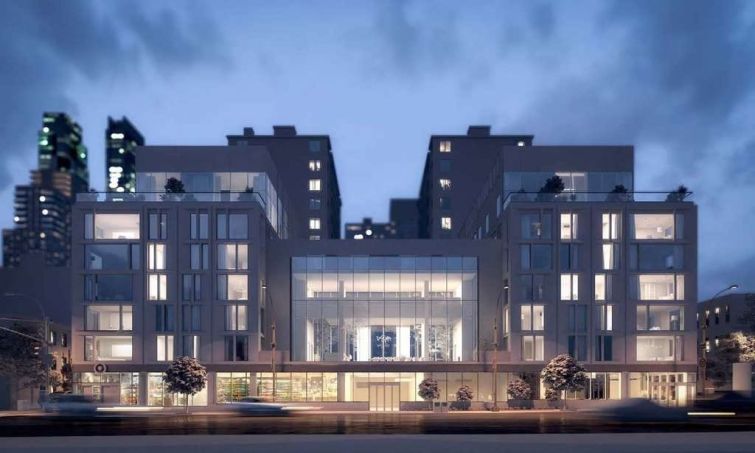 A rendering of Bloom on Forth Fifth. Image: CoStar Group

Criterion Real Estate Capital has provided a $130 million condo inventory loan to XIN Development Group International for its residences at Bloom on Forty Fifth, a 110,500-square-foot condo building at 615 10th Avenue in the Hell’s Kitchen area of Manhattan, Commercial Observer has learned.

The loan on the nearly completed, luxury, mixed-use condo and retail property refinanced unsold condo units and took out $90 million in previous construction financing from Bank OZK that was provided in 2017 to facilitate the build-out, city mortgage records show.

Along with the refinance, the proceeds will cover roughly $7.1 million in remaining construction costs, fund $3.5 million in carry costs, $2.6 million in closing costs, a $9.9 million interest reserve, and $1.9 million in tenant improvement and leasing costs that it would take to lease out the handful of small retail spaces left on the ground level. XIN was also able to repatriate $15.1 million of equity in this deal, according to loan marketing materials reviewed by CO.

XIN — a subsidiary of the publicly-traded Xinyuan Real Estate — was seeking a five-year, floating-rate and interest-only, non-recourse loan with sufficient prepayment flexibility, as per the loan marketing materials.

The developer acquired the site in 2016 for around $57.5 million, demolished the existing gas station and began construction in 2017, with a scheduled delivery timeline of the first quarter of this year.

Newmark’s Dustin Stolly, Jordan Roeschlaub and Daniel Fromm represented XIN in sourcing and arranging this financing, sources said. Newmark declined to comment on the deal when reached prior to publication.

The eight-story, 82-unit property — designed by Marvel Architects — has an alternate address at 502 West 45th Street, hence the name of the asset. Its 35,400-square-foot retail component, which is line to host a Target, spans the ground- and lower-level floors of the development, while the residences are situated from the second through eighth floors.

Target will occupy around 28,500 square feet on a 20-year lease, sources said; it’s currently building out its space and is in line to open for customers this summer, sources said. Dermatologist Buka Derm will also occupy just over 1,900 square feet next to Target at street level. The property has three other small retail spaces that haven’t yet been filled, but sources said leasing interest for each space has picked up as of late.

Building amenities include a ground-floor fitness center; bicycle storage; a resident grill on the seventh floor; and an 8,000-square-foot, elevated, central landscaped courtyard straddled by the asset’s two eight-story structures, according to information from the property’s website.

The assets 82 units average 754 square feet in size and include five studios, 46 one-bedrooms, 25 two-bedrooms and six three-bedroom layouts, with in-unit laundry, according to information from CoStar Group. Some of the units also sport private terraces.