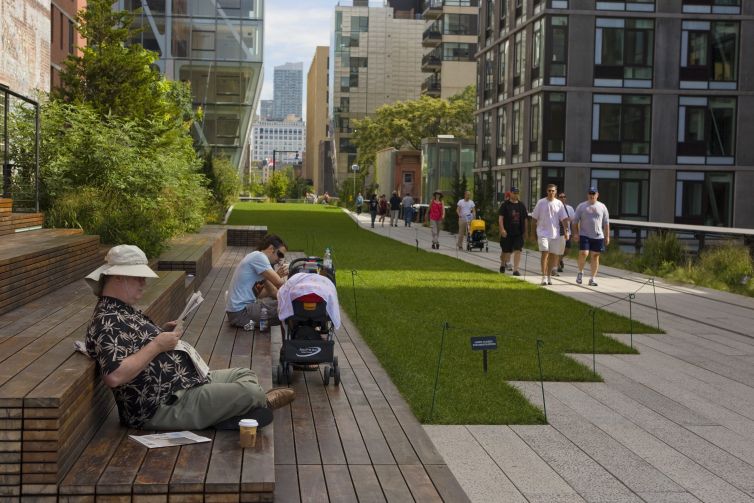 Brookfield and Empire State Development are teaming up to extend the High Line from 30th Street and 10th Avenue to Brookfield's Manhattan West project across the street. Photo: George Rose/Getty Images

During his State of the State address on Monday, New York Gov. Andrew Cuomo revealed plans to build a new 1,200-foot section of the High Line to an open space at Brookfield Properties’ Manhattan West, allowing pedestrians to access the elevated park from the newly opened Moynihan Train Hall across the street.

The $60 million project would connect an existing High Line stub at 30th Street and 10th Avenue one block to the pedestrian plaza at Manhattan West, Brookfield’s massive, mixed-use development.

Brookfield is teaming up with the Port Authority of New York and New Jersey, Empire State Development and the Friends of the High Line to construct the L-shaped connection from 30th Street, near where the High Line enters The Shops at Hudson Yards, to Brookfield’s elevated public space mid-block between West 31st and West 33rd streets and Ninth and 10th avenues.

While it’s unclear how much of the construction cost Brookfield is covering, the real estate investment trust will certainly benefit from the project, which will direct the High Line’s typical flood of tourists to its 240,000 square feet of retail at Manhattan West. Besides the retail, the eight-acre, avenue-long complex will include 6 million square feet of office space, 844 apartments, and The Pendry boutique hotel when it’s complete. Much of Manhattan West’s office portion is done, and the hotel’s scheduled to open this year.

This effort will be the first of two planned High Line extensions. The second one will extend the current High Line terminus from 34th Street and 12th Avenue past the Javits Center to Pier 76, an NYPD tow pound that will eventually become part of Hudson River Park. The current iteration of the High Line — formerly an abandoned elevated freight rail track — runs 1.45 miles from Gansevoort Street in the Meatpacking District to just south of the Javits Center.

“This will be the most ambitious redevelopment that New York City has seen in decades,” Cuomo said in a press release on the first project. “When the private sector economy lags, state governments build infrastructure and spur development. The beautiful Moynihan Train Hall is open, the renovation of Penn Station and this High Line extension project begin this year. This connection is part of a district-wide redevelopment of the West Side that will jumpstart the private market in a post-COVID world.”

The governor’s office did not comment on a construction timeline for the High Line extensions to Manhattan West or Pier 76. Cuomo and Empire State Development opened the new $1.6 billion Moynihan Train Hall in the former Farley Post Office building on Jan. 1. The attractive space includes a waiting area for Long Island Railroad and Amtrak passengers who would otherwise catch their trains across the street at Pennsylvania Station, and it will eventually host shopping options and a food court.