Toyota Pops Up Under Manhattan’s High Line for the Holidays

The asking rent was $175 a square foot 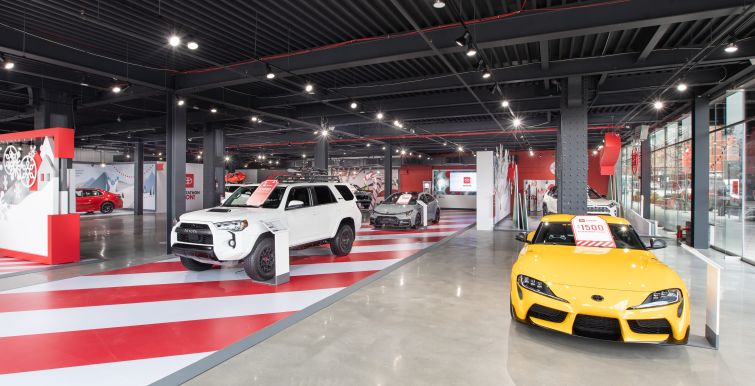 Toyota has opened up a pop-up experiential marketing center at 60 10th Avenue under the High Line at West 14th Street in the Meatpacking District.

The nearly 10,000-square-foot retail space features some of Toyota’s car, truck and SUV lineup, and is tied to the Toyotathon Dealer Sales Drive. No auto sales will take place on-site, but visitors can take an imaginary visit to the North Pole while experiencing some Toyotas along the way.

Target and Disney have hosted pop-up events at the same space in previous years.

Alex Cohen, vice-president at Compass, represented Toyota’s marketing firm, Czarnowski, in the five-month licensing deal. (The pop-up itself will be there for approximately three months.)

The retail space at 60 10th is owned by Savanna, which was represented by Matthew Schuss of JLL, along with then-colleague Amy Zhen, who has since moved to Cushman & Wakefield.

The asking rent was $175 per square foot.

“Toyota’s commitment through its marketing firm, Czarnowski, to experiential retail during the pandemic represents confidence in New York City,” Cohen said. “Our search for the right space took us away from the typical tourist havens of Times Square to focus on locations with compelling mixes of retail, and restaurants, and public spaces like the High Line, to which New Yorkers are returning.”

The Meatpacking District has been a magnet for auto showrooms and pop-ups. Both Tesla and Genesis have area stores, while both Lexus and Bentley have popped up in the area in the past. Cadillac opened a permanent space in 2016, at 330 Hudson Street, but closed it in the spring of 2019 as it pulled back its New York City occupancy.

Cohen also represented Toyota’s marketing firm, along with colleagues brought in for each market, for similar experiential pop-ups that have opened in Miami Beach, Chicago and Los Angeles, as well as others for Lexus in Manhattan at the former BCBG retail store at 461 Fifth Avenue, along with spaces in Miami, Chicago and Newport Beach.