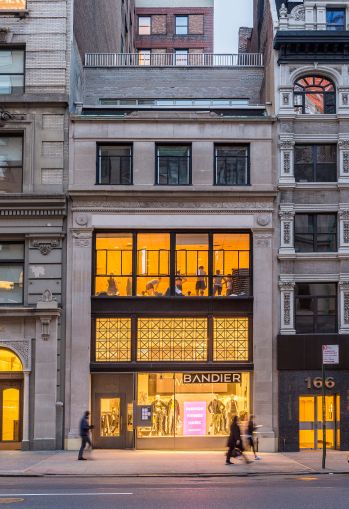 The identity of the buyer was not immediately available, only that he is a high-net-worth individual from the Middle East, according to a source with knowledge of the deal.

The five-story building at 164 Fifth Avenue, located between West 21st and West 22nd streets, is fully leased to Alo Yoga, which utilizes the space as its offices, a yoga studio, an activewear store, and the newly-announced restaurant Sutra. The 15-year lease began in 2017 and spans 17,600 square feet. It had an asking rent in 2017 of $400 per square foot at the time, as CO reported.

Sutra, a plant-based restaurant by celebrity chef Matthew Kenney, was announced earlier this fall, and will be located on the top floor of the building. “We believe in living a clean, organic and healthy lifestyle,” Marco DeGeorge, co-founder and co-CEO of Alo Yoga, told WWD, which reported news of the restaurant. “It made sense to partner with Matthew Kenney to open Sutra because his values align with ours.”

The Los Angeles-born Alo Yoga, which has two other stores in New York and eight in total, was launched by DeGeorge and Danny Harris in 2007.

Thor purchased the property from the American Institute of Graphic Arts for $23 million in 2014, according to property records.

It was not immediately clear which brokers were involved in the deal.