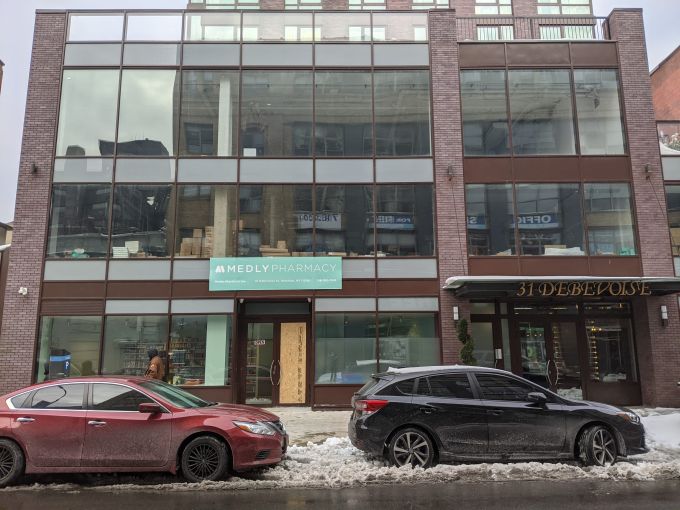 Pharmacy startup Medly Pharmacy has opened a three-story headquarters in Bushwick, after raising $100 million in funding earlier this year.

The 30,000-square-foot space at 31 Debevoise Street will serve as the corporate offices, retail pharmacy, and operations center for the startup’s primary offering: its same-day prescription delivery service.

The Brooklyn-based Medly now operates in five markets, including New York, New Jersey, Philadelphia and Miami, and offers free prescription delivery during daytime hours, along with other pharmacy services.

The three-year-old startup has experienced rapid growth over the course of this year, as the COVID pandemic spurred further adoption of digital services, telehealth and delivery of a variety of goods. The startup closed a $100 million Series B round in June, co-led by Volition Capital and Greycroft.

It is one of a handful of startups looking to disrupt the retail pharmacy model, and the $370 billion pharmacy sector along with it. Capsule, another New York City-based prescription delivery startup, raised $200 million in 2019, while Alto Pharmacy, a West Coast rival, raised $250 million from SoftBank’s Vision Fund in early 2020.

The success of such startups could impact brick-and-mortar retail as pharmacy chains, such as Duane Reade and CVS Pharmacy, make up a large portion of retail leases and haven’t significantly downsized in the way that fashion retailers, bank branches and other retailers have.

Medley, which has one location to service each of the markets it operates in, plans to expand to several additional markets beginning in 2021, Erik Valenzuela, Medly’s vice president of retail development, confirmed.

Medly was founded by brothers Marg and Sahaj Patel, whose parents owned an independent pharmacy in Williamsburg. At the time its last round of funding had closed, Medly had onboarded 15,000 providers, added 50,000 patients, and delivered more than 500,000 prescriptions, the company said in a statement.

It will occupy the entire commercial condo at a newly developed, block-through condominium building in Bushwick, which also has an address of 46 Cook Street. The mixed-use property rises 12 stories along Cook Street, and three stories on the Debevoise side, between Graham Avenue and Humboldt Street. It moved from a 2,500-square-foot storefront on Graham Avenue, per Valenzuela.