The grocery store gained notoriety during the ‘92 Rodney King riots 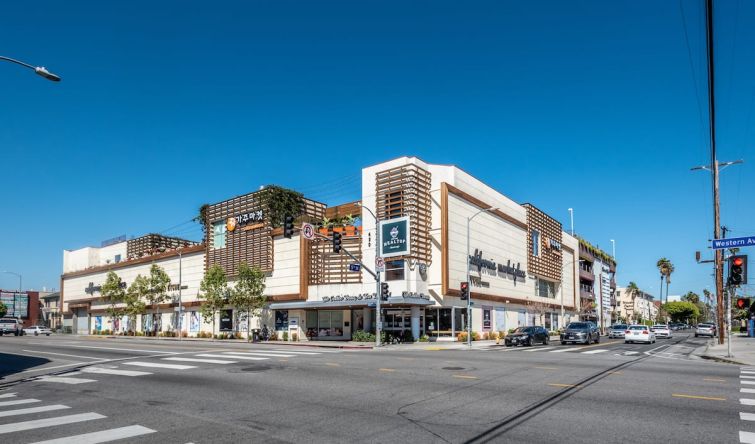 A prominent shopping center in Los Angeles’ Koreatown, which was previously owned by a popular Korean businessman, has traded hands. The shopping center also played a significant role in the standoff between business owners and looters in the historic 1992 Rodney King riots.

Jake Sharp Capital acquired the California Market this month for $57.5 million after bidding at a live auction in bankruptcy court, according to a sale order and notice of closing shared with Commercial Observer. The building at 450 South Western Avenue includes more than 80,000 square feet of space. It’s anchored by a Korean grocery store, and is currently 86 percent leased to 25 tenants, including Gaju Market, Pacific City Bank, Myungrang Hot Dog and BMB Medical.

“The Koreatown submarket has held up during the pandemic, quality retail remains in high demand, and we are confident the infusion of capital will further stabilize the asset,” said Will Nelson, senior vice president of real estate lending at Columbia Pacific Advisors.

CBRE first announced the sale, but declined to share the names of the buyer or the seller. Michael Shustak, Derrick Moore, Chris Caras and Phillip Sample represented the seller.

The market was owned by Hyun S. Rhee, property records show. According to media reports, she is the widow of former owner and grocery chain founder Richard Rhee. In 1992, the Los Angeles Times reported that Rhee came from Seoul in 1959 to study at UCLA, and eventually invested in real estate. He acquired the market in 1986, and expanded it into a successful chain.

But when looters and rioters descended upon the urban neighborhood west of Downtown L.A., Rhee’s grocery store on Western became the setting for a major turning point in the local narrative of the infamous riots that lasted about six days in 1992, following the acquittal of four white officers who beat King, a Black man, during a traffic stop.

After realizing police were not coming to protect their community amid historic mayhem, local business owners and employees decided to, on their own, defend their properties from looting and destruction. That included Rhee and the California Market, which became an “armed camp,” as LAT described it. They boarded up the building and barricaded the store with shopping carts and pallets of bagged rice. Business owners and employees carried automatic weapons and assault rifles on the rooftop of his store, and they shot into the air to deter rioters.

Rhee personally stopped a looter at gunpoint from throwing a Molotov cocktail at his store.

Dozens of locations nearby, including a strip mall a half-block south from California Market, were engulfed in flames. An estimated 2,200 Korean-owned businesses suffered some $400 million in damage, which amounted to almost half the amount inflicted on the entire city. But, Rhee protected his property from any major damage.

Much of the community was in ruins, and many investors, businesses and property owners fled. The neighborhood lacked significant investment and was largely neglected for a period. Rhee died in 1997 at 62 years old.

But, all signs of destruction from 1992 are long gone now. In fact, Koreatown — the largest Korean enclave in the world outside of the Korean peninsula — has seen a rapid and significant construction boom the past eight years. With dozens of multifamily conversions, and consistent restaurant and retail growth prior to the pandemic, it’s the most densely populated district in L.A. County and on pace for continued expansion.

Update: This story has been updated to include new information about the acquisition financing for the California Market transaction.