Turner & Townsend’s Linda Foggie On Why Manhattan Remains in Demand 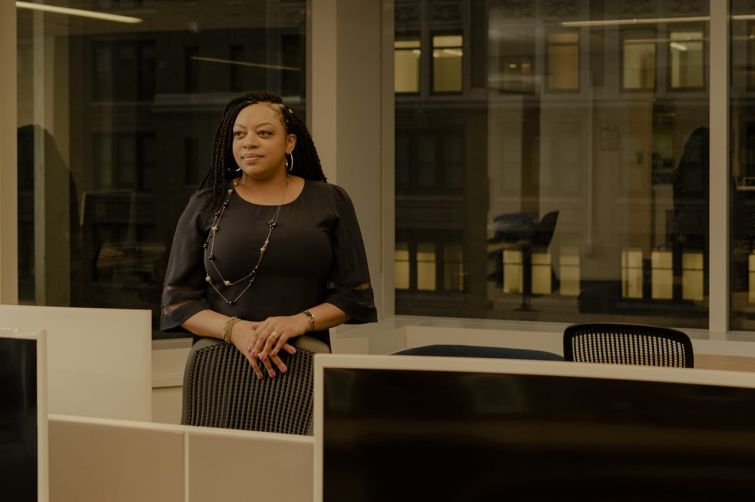 A big part of Turner & Townsend’s business is helping companies manage their real estate portfolios and projects. Hire the consultancy, and you can be confident that someone who knows what they’re doing is managing something you might not have the expertise for in-house.

And when it came time late last year for Turner & Townsend to fill a senior vice president and New York office leader position, Linda Foggie seemed perfect, given her background and the company’s Gotham focus.

Foggie had been leading Wells Fargo’s Northeast and mid-Atlantic real estate portfolio and projects, which included New York. Since about 70 percent of Turner & Townsend’s business in the city involves real estate, she was a natural for the role.

She talked to Commercial Observer in late November about her current job, and a little bit about her old one, as well as about what clients are seeing and needing in terms of real estate.

The conversation has been edited for clarity and length.

Commercial Observer: It says on Turner’s website that your initial focus will be working with the New York team on your real estate segment growth strategy. What does that mean?

Linda Foggie: In our company, we divide our target sectors into three areas. The largest, by far and away, is what we consider real estate — companies which have real estate investment facilities, for corporate clients and anybody with a building or a built environment.

The other sectors we work in are oil and gas, mining and minerals; and the third sector is infrastructure —  projects which relate to things like airports, trains, and subway systems, etc. Real estate covers about 70 percent of our business locally, and that is my background — more so than natural resources and heavy infrastructure — so that is where my initial focus has been, to help with the growth strategies for that real estate sector.

What did you do at Wells Fargo?

Were you involved with the decision to move a segment of Wells Fargo to Hudson Yards from the Seagram Building?

Yes, but I won’t comment on the thinking from the business side. From a real estate perspective, my role did involve looking at multiple facilities around the city.

Can you say what the attraction of Hudson Yards was?

The Yards, part of it was for Wells Fargo; it was a commitment to the New York City market. It’s a very important market. The Yards were sort of a sign of the future. Wells was very forward-thinking in its ability to see the future. When Wells made that decision, it was very much undeveloped; it was still a rail yard, pretty much. So we had to get past what we saw with our eyes, and envision what the future might look like. And the other thing was a nice opportunity to set down stakes in the city.

Are you involved in Turner & Townsend’s own space decisions?

Yes, from the perspective of the New York market. Turner & Townsend is at 475 Park Avenue South (Park and East 32nd Street with 27,000 square feet). They moved here in December of last year. I joined the firm in January. So, I wasn’t a part of that decision. I don’t oversee the real estate for Turner & Townsend nationally, though.

That is on the edge of Midtown South, which has been an area that has attracted a lot of technology and startups. I’m curious if that played into that decision.

I agree with how you’re describing the area. It was also the transportation hub [aspect of the area]. It’s near Penn Station, it’s a very easy walk, and Grand Central is just a few blocks away. The subway is right outside of our door, literally. And the amenities around there, there’s a lot happening. That played into the decision.

How is the decision working out?

We’re really happy there. Less so, because of the other firms that are around it. A lot of the firms around [us] are people in our industry: a lot of architects, and design firms, and furniture showrooms are there. [It’s good to] be close to our partner companies.

And from a transportation perspective, how easy it is to get into the office, it’s working out really well.

Explain what it is that Turner & Townsend does.

Turner & Townsend is a consulting firm, and it is business to business; it’s incredibly rare that we go after the consumer market.

The majority of what we do is project management for our firms. We have some other services as well. So, when a client needs to build something, we will help them get to the point of making their real estate decisions because we do feasibility and due diligence with them, help them look into different properties, assess the condition of those, and make a decision about what’s most effective. We will [also] oversee hiring and management of all the contractors and consultants involved in building the building. We’ll manage the costs, see to it the risk is managed.

I think the really interesting part of what we do is not that we would do it just for one project at a time. A big component of what we do is around program management and portfolio management. Let’s just say a large client that has a large portfolio of real estate, and they have a normal turn of projects that have to get done — we oversee the doling out of that work to contractors. That makes up a significant part of what we offer, too.

That’s what Turner & Townsend was doing for me when I was at Wells Fargo. That’s how we knew each other. So, I’m very familiar with that service.

A lot of clients are now asking for help with portfolio rationalization. And what that means is: “I’m a client, and I have one huge office in the middle of Manhattan, and maybe I have 15 other small offices around New Jersey and Connecticut. What should I do here? Can you help me assess how I’m spending my money, and how are my people going to work in the future? Should I really get out of these spaces? Or make them larger, or smaller, or set up a different way?”

No one has figured out the future. People are still very much in a learning mode.

With what’s happening with the economy, they’re very much in a valuing people mode. When COVID first hit, there was kind of this freeze, this stop. People were unsure what was going to happen. Should projects go on hold, or get canceled right away? Or [delayed] for a year or two?

Now, we are starting to see a lot of companies coming back online. They’re starting to loosen the reins and invest, but they’re doing it very, very [tentatively]. To the point where awarding a project is taking much longer than it did before. People are being incredibly thoughtful about where they spend their capital. Because, before, it was a bull economy, and people could be more aggressive in investments. And we’re definitely seeing a slowing there.

Are your clients looking more favorably on suburban locations, because it’s easier to commute by private automobile vs. using mass transit and being exposed to strangers’ germs?

We are seeing what some people call the return of the suburban office. There is this move toward the hub-and-spoke model, where you still have a presence in the central business district. Some clients are saying, “It’s important that we have this presence in the central business district, but should we spread this out and build smaller offices that are closer to where people live?” And people will travel into the city not every day, but more when they need to collaborate. That’s part of the portfolio rationalization that I was mentioning.

Does this reduce the overall amount of real estate that a company needs? Largely, we’re seeing that the answer to that is, no. Maybe a client has 100,000 square feet of space in Manhattan, so, in the future, maybe they’ll have 50,000; and then they have four offices that are 10,000 square feet each, in Brooklyn and Long Island and Connecticut. Overall, they continue to have similar-sized portfolios.

I would think that, if a large percentage of your workers have learned they can be just as productive at home, the company would need less space. Yet, you’re not seeing that in practice?

It depends on the industry, the sector. A lot of CFOs, they still place value on the ability to operate in-person. There’s been a lot of working from home, and the expectation is that they will continue to do that. There is a need for collaboration; sometimes a team is working on a joint project. If you’re a software company, and you got a person trying to develop some programs, those things are often done better together. The point of having an office is so that, when they need to, they can come together.

In New York and San Francisco, people live in tight quarters. Those people actually need a place to work some days. Some people share an apartment in New York City, and they may have three roommates or little children. Because schools are closed, it’s very difficult for them [to work from home] some days. They really prefer to have a place to go.

Sometimes people have great setups at the office, but are often afraid, because they are not sure about their ability to commute [safely] on public transportation.

Right now all 19 of our [satellite] offices have reopened. We opened New York on the third [of November]. However, this week, we re-closed San Francisco, because the governor in California changed the threat level. We keep the offices open for people to come in, but it’s 100 percent optional for our staff. They can continue to work from home.

Of course, we have clients, so that requires us to be available. There are times when our staff has to go out to a job site. In those cases, we brief them on all the mandated safety requirements. We provide them with masks, and hand sanitizer, and gloves, and all the personal protective equipment they need — and we take all precautions. So, all our offices, except San Francisco, remain open, but we do monitor it very closely because of the spike in the cases.

And, if people do come into the office, they have to sign up for a desk — which they didn’t have to do before — so we can keep the capacity to no more than 50 percent. About 15 percent of the population will come in [to New York] on any given day.