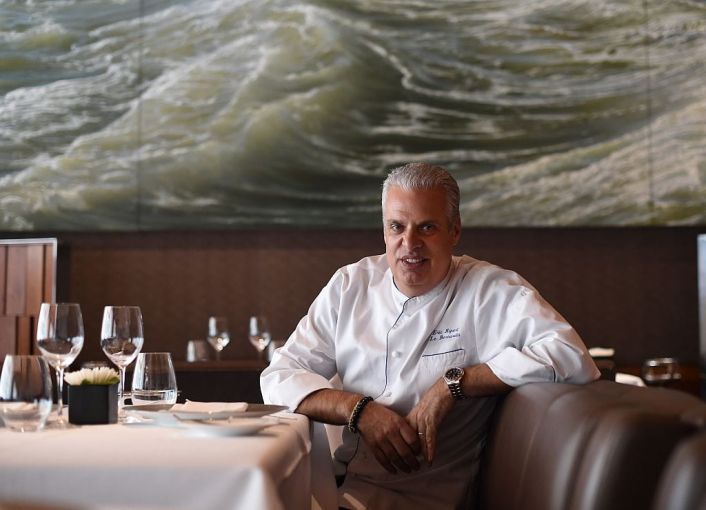 The Chef Éric Ripert-owned Midtown restaurant and its nearby Aldo Sohm Wine Bar laid off 76 staffers, citing the “the full re-closure of all indoor dining,” according to a Worker Adjustment and Retraining Notification Act (WARN) notice. A spokesman for Le Bernardin declined to comment.

“In Compliance with NYC’s mandatory closure of indoor dining [Le Bernardin] will be closed until further notice,” Ripert wrote on Twitter. “Our #1 priority is the safety of our guests, staff & community. We are grateful for your support & look forward to brighter days ahead when we can reopen. Stay safe.”

Gov. Andrew Cuomo announced last week that indoor dining would be banned in New York City starting this past Monday, a little over two months after it was allowed to resume. The new move came amidst a surge in the number of coronavirus cases. Restaurants are now only allowed to offer outdoor dining and takeout.

Many warned that the second shutdown would be disastrous to the already-reeling restaurant industry, where owners have struggled to pay rent, closed their doors permanently by the thousands, and laid off more than 200,000 workers during the pandemic.

“Due to indoor dining and limited indoor dining, we hired back about 100,000 people,” Andrew Rigie, executive director for the New York City Hospitality Alliance trade group, said. “Now, with shutting down indoor dining again and the winter weather making outdoor dining less feasible, those 100,000 people who got their jobs back have their employment on the chopping block once again.

“It’s really been the failure of the government to provide adequate support to these small businesses,” Rigie added. “Many of these jobs will not return.”

A massive crowd of restaurant owners and workers took to the streets in Times Square Tuesday to demand immediate help from the federal government to pass the RESTAURANTS Act, which would provide $120 billion in grants to the industry.

“We’re not asking for handouts, but we’re asking for a bridge to get to the point where we can continue to operate, so when the economy turns around and when the pandemic starts to slow down, people will have jobs to come back to,” celebrity chef Tom Colicchio, owner of Crafted Hospitality, told CBS New York.

Cuomo acknowledged the damage cutting indoor dining would wreak on the restaurant industry and joined the call for the federal government to step in and help. He also announced that he extended the commercial eviction moratorium until Jan. 31.

“The federal government must provide relief to these bars and restaurants in this next package,” Cuomo said last week. “I understand you’re wiping out businesses.”

Le Bernardin — which has kept a coveted three Michelin stars since 1980 — first laid off an unspecified number of staffers in March as the first set of shutdowns hit the city. After Cuomo announced indoor dining could return at a 25 percent capacity on Sept. 30, Le Bernardin was one of the first three-star dining establishments to return.

“It’s a risk, sure,” Ripert told Bloomberg. “But it will be a risk in December, in January. We want to bring life back to our neighborhood in Midtown, back to our industry.”

Ripert also noted that even with $2 million in Paycheck Protection Program funding, it was expensive to get Le Bernardin’s dining room to a safe enough place to welcome back guests, and it would only break even at a full 25 percent capacity.