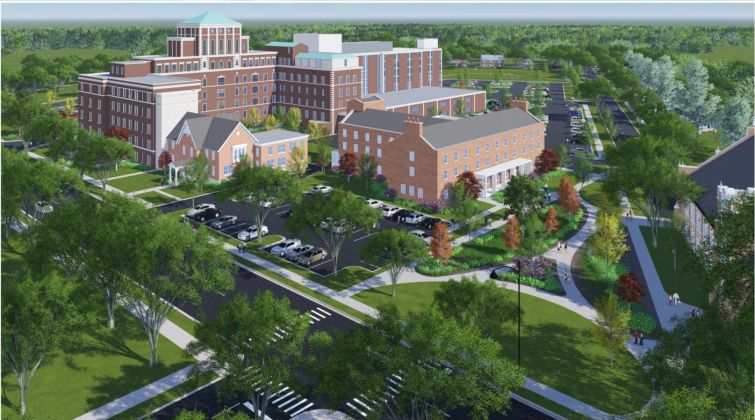 A rendering of a redeveloped Old Copley Hospital. Courtesy: D2

A group of partners based out of Aurora, Ill., who lead investment and development firm Fox Valley Developers, have locked in a roughly $82 million package of public and private financing in order to move forward on its redevelopment of an old hospital campus in Aurora that was designated as a historic landmark earlier this year, Commercial Observer has learned.

The financing will facilitate Fox Valley’s plans for a redevelopment of Old Copley Hospital, an abandoned, 9-acre hospital campus at 506-532 South Lincoln Avenue in Aurora, a suburb located along the Fox River, just west of Chicago.

Enhanced Capital provided a bridge loan to cover nearly $32 million in state and federal historic tax credits as well as $3 million in Commercial Property-Assessed Clean Energy (C-PACE) financing. East West Bank was brought in to partner with the developer as a historic tax credit investor, thereby reducing its tax liability via discounts provided by the program.

The financing package also included $34.5 million in first mortgage debt from an unnamed Boston-based debt fund, sources said, and the developers also received about $12 million in funds from the City of Aurora, of which the City Council unanimously approved the development in November 2019. The remaining proceeds in the $108 million capitalization is equity contributed by the project’s partners.

D2 Capital Advisors — the debt and equity advisory arm of the D2 Organization — arranged the construction financing on behalf of Fox Valley, alongside tax credit advisory firm Bracket Partners, who helped structure the package, which closed on Dec. 18.

When complete, the site will feature a mix of 96 independent, assisted-living and memory-care senior living units and an independent apartment community comprising 53 units that will house tenants with cognitive and/or developmental disabilities. It will also sport park space and about 86,000 square feet of medical office space that will host health care administrative offices, an urgent care clinic and a pharmacy.

Gardant Management Solutions has been tapped to manage the senior living residences, and Johnsburg, Ill.-based Konrad Construction is the general contractor for the project, sources said.

The month it was approved by Aurora’s City Council, Mayor Richard Irvin claimed that the project, which sits on the east side of the township, marked the largest investment in the area “in generations, maybe the largest ever,” according to a report from The Aurora Beacon News. At that time, the estimated cost of the approved project fell in at around $128 million, as per The Beacon News.

D2 Capital Advisors Vice President Jack Cortese said in a statement about the arrangement of the deal that his group had to overcome the hurdles of “sourcing a lender that would not only consent to C-PACE [financing], but also had experience with tax credits.”

He added that while his team was able to assemble lending sources, there were added challenges around “getting them comfortable with senior living products amid the pandemic and educating them on the independent apartment community.”

Built in the late 19th century as a small hospital with enough room for around two dozen beds, the site went through a number of expansions over the years to accommodate more patients and a variety of health care services before it was shuttered in 1995 to make room for the brand-new Rush Copley Medical Center that was opened that year.

Fox Valley bought the site two years ago with plans to revitalize it. In February, the Old Copley Hospital was officially added to the National Register of Historic Places, as it was the first “purposefully-built city hospital” in the country when it opened in 1888; it didn’t offer just standard patient care, but also maternity and surgical care, MacRostie Historic Advisors’ Rachel Barnhart, who wrote the nomination for the site’s inclusion on the National Register, told Northern Public Radio in February.