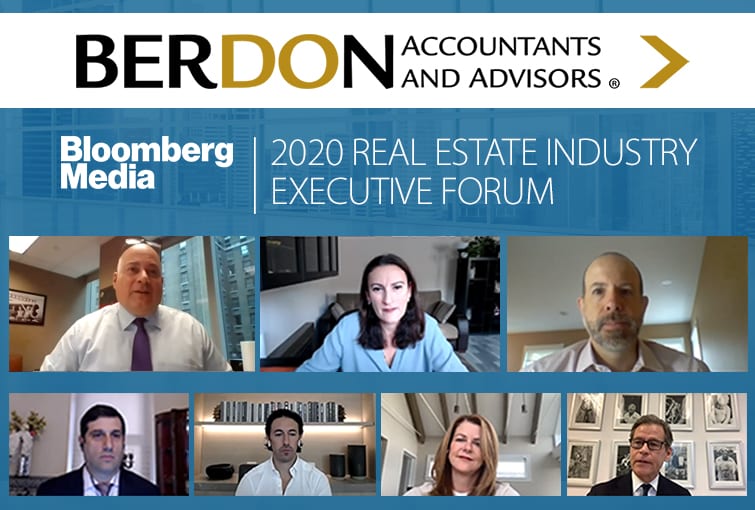 On Nov. 17, Berdon, in conjunction with Bloomberg Media Group, hosted a virtual 2020 Real Estate Industry Executive Forum consisting of two panel discussions about the state of the industry.

The morning led off with a fireside chat with Yelena Shulyatyeva, a senior U.S. economist for Bloomberg; and Jeffrey Langbaum, a senior real estate investment trust analyst with Bloomberg Intelligence. The discussion was moderated by Maury Golbert, a partner in Berdon’s tax department and co-leader of the real estate practice group.

After Golbert kicked things off by mourning the current state of the New York Jets season, he noted, with some sense of irony, that at last year’s event, Chief Bloomberg Economist Carl J. Riccadonna, said that the only thing that could slow the economy was “anything that gets consumers to stop spending.” What seemed like almost impossible conjecture in 2019 has become our reality in 2020.

“Who could have known this year we’d see that?” Golbert said.

Shulyatyeva then showed a slide with the economic outlook for recovery during the COVID-19 crisis. She noted that broad-based opinion holds that the government’s initial response was helpful in restarting the economy, including the CARES Act and the Federal Reserve slashing interest rates.

Now, with many unemployed and others having saved money due to lower spending rates, Shulyatyeva said that “macro-economic stability is hiding what’s happening at a micro level. Bifurcation is happening in the economy.”

Laying out crucial factors that will determine the level or lack of economic recovery in 2021, Shulyatyeva mentioned the number of COVID-19 cases and a fiscal package (or lack thereof) from the federal government, saying that “despite great news on a vaccine, we still need [assistance] between now and the middle of next year. Consumer spending will be slow to recover, as will the overall economy.”

Mentioning the presidential and Senate races, Shulyatyeva said that economic growth could be five percent if Democrats take the Senate, as we could get an economic recovery package close to the $2 trillion we had earlier this year. If they don’t, however, economic recovery could be slower, as any government assistance could be closer to $500 billion.

Given such larger amounts, Golbert asked if there’s a point at which “these numbers lose their meaning because they’re so big.” Shulyatyeva said that while the amount matters, it’s more important how the money is allocated, noting that a lack of funding for state and local governments could halt projects.

“This will be a prolonged hit to the recovery, because state and local governments can be a big drag on the economy for a long time,” she said.

Shulyatyeva believes we need a government relief package of at least $1 trillion “just to get us to the other side of the pandemic.”

When asked for his take on the current economy, including the tightening of the credit market, Langbaum noted a tendency toward optimism in the commercial real estate and REIT markets. While acknowledging that the next three to six months will “get worse before they get better,” he said that news of a vaccine had spurred a new positive outlook.

“If you’re leasing office space long term, you may feel better about it [due to the vaccine news],” Langbaum said, mentioning that real estate and health care REITs have seen huge rallies. “The economy is not out of the woods — the items Yelena talked about are still an issue — but the longer-term view is a lot easier to wrap your head around, and that has driven improvement in stock prices over the last two weeks.”

In a discussion of current conditions, Gilmartin issued a defense of New York City.

“It’s important to remember that density is not the enemy of the city and safety,” Gilmartin said. “Many have put the blame at New York’s doorstep, but New York’s density is a lot of what makes the city great.”

She also emphasized the city’s history of rebounding from crises, from Hurricane Sandy to 9/11.

“I’ve always said it’s important not to make sudden moves,” Gilmartin said. “When we were building New York Times headquarters, people said no one would ever go to the top floor, but we adapted. It’s one of our great assets as a city.”

Joblon noted that in this “uncharted territory,” it’s important for government to step up, saying that “the political environment isn’t helping.” He also mentioned how developers have come to be seen negatively by many.

“Developers have become a target for progressives,” he said, “and that will need to change to shepherd progress.”

Discussing the distressing retail environment, Clark said that Brookfield has been flexible with struggling tenants, including shifting rent payments for some to a percentage of sales. But there’s only so much that landlords can do to help, he said, while also putting the onus on the government.

“The federal government needs to help get people back to the office,” said Clark. “Washington needs to step up and take care of the losses so people can get back to work. Absent a complete bailout, there’s no way for small businesses to survive without people getting back to the office and spending money. Whatever they can do to make it easier for these businesses to operate, they should do.”

Ultimately, the panelists leaned toward optimism, believing that New York will not only survive this crisis, but will once again be the great city we all know and love.

“I’ve been through a number of these crises. Those who bet against New York lose, and those who bet on it come out big winners,” said Clark. “We’ll get through it.”