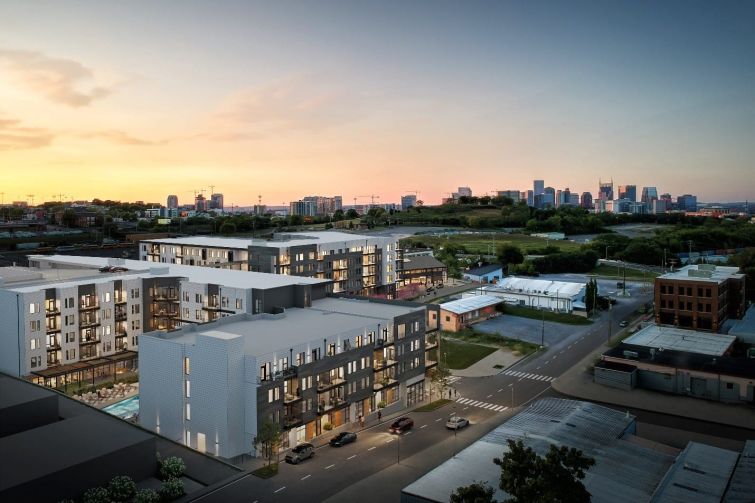 SEE ALSO: Sunday Summary: The Death of a Con Man

Newmark’s co-heads of debt and structured finance Dustin Stolly and Jordan Roeschlaub, alongside Nick Scribani and Chris Kramer sourced and arranged the debt.

Standard Assembly will sit on a three-acre site located at 715 Merritt Avenue, just south of Downtown Nashville in the city’s Wedgewood-Houston (WeHo) neighborhood, a designated Opportunity Zone. It will ultimately deliver 310 apartments to the area, and will comprise more than 13,000 square feet of common space and retail space, and it will have 360 parking spaces, according to Westwood’s website. The joint venture bought the site for $4.5 million last year, according to a report from the Nashville Business Journal.

The 247,000-square-foot project will see two, fresh multifamily buildings erected on the site — that will stand at five or six stories, per Wedgewood’s website — and will include a third, 8,000-square-foot building that will be redeveloped to fit for rental use. The joint venture broke ground on the project in August, and they plan to open it in summer 2022.

Standard Assembly is just the first phase of a two-phase development. The developers are slated to break ground on the second phase — which will sit on a two-acre site adjacent to Standard Assembly — sometime next year. (Wedgewood’s website has a live construction camera available to watch.)

The asset has benefitted from work from local Nashville-area architects, designers and artists tapped by the joint venture to help erect an asset that will fit the “creative community” of WeHo — which is home to a variety of galleries and studios — according to information from Newmark. Atlas is the only firm involved who’s not based in the area.

“Our goal for Standard Assembly is to promote this growth by creating a timeless sense of place that embodies the spirit of the neighborhood and the people who work and live there,” said Atlas Managing Partner Alex Foster.

HY Principal Nathan Hysmith said in a statement that his firm is excited to deliver the first Class A rental project in the WeHo neighborhood, an “already vibrant and creative community that has long been an artisan-, maker-centric neighborhood in Nashville.”

Hysmith hinted at the importance of maintaining and helping proliferate the “spirit” of the WeHo area “with other like-minded developers,” and added that the “walkable neighborhood will further cultivate into the artisan [and] maker center of the southeast, attracting additional growth of the creative community.”

Wedgewood’s Beau Fowler believes the WeHo area could potentially become a main creative and artistic hub in the southeast region, as per a statement in NBJ.