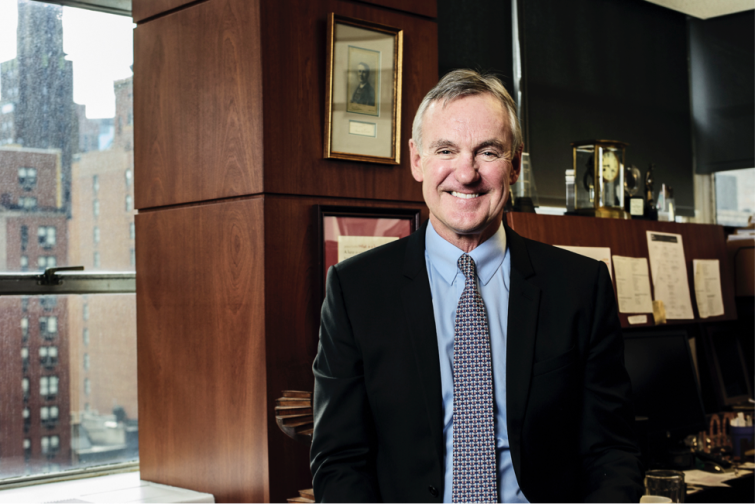 Peter Hauspurg, who co-founded Eastern Consolidated with his wife in 1981 and grew it into one of the top investment sales brokerages in the city until it closed in 2018, passed away Tuesday night, his wife Daun Paris said. He was 67.

He was in his Santa Monica, Calif., home cooking a meal when he had a heart attack, Paris said.

“Peter was beloved by all,” Paris said. “He was a man of enormous heart, integrity, kindness and brilliance.

Hauspurg ditched a career in law to pursue commercial sales and in 1981 teamed up with Paris to start Eastern Consolidated. (The pair married two years after founding the business.)

“We didn’t have name recognition and we didn’t have money, but we had the ability to uncover off-market opportunities,” Paris said. “We believed that if we can find opportunities available, people would pay a premium.”

Their bet paid off. Eastern Consolidated grew to eventually boast a more than 100-person staff and closed billions of dollars of sales per year — including the Hauspurg-led $115 million sale of 139 East 56th Street in 2016. It consistently ranked as one of the top brokerages in the city.

However, as the climate for middle-market firms became tougher and with its investment sales division facing lower numbers, the couple decided to close Eastern in 2018. Hauspurg landed for a time at ABS Partners Real Estate, but left and moved to the West Coast three months ago to be nearer to his grandchildren, Paris said.

Hauspurg was born in Hackensack, N.J., and grew up in Rye, N.Y. His father, Arthur Hausprug, served as the chairman for Consolidated Edison from 1982 to 1990 and remained a director there until 1997, The New York Times reported. His father’s job didn’t play a role in what Hauspurg eventually named his brokerage.

“We get that question all the time,” Hauspurg previously told Commercial Observer. “At the time we were trying to sound larger than we were.”

He graduated from Duke University and Fordham Law School, and landed a job right out of law school. He got lured to commercial real estate after seeing the salary his friend was pulling in at brokerage Whitbread-Nolan.

Hauspurg struggled in his early career, telling CO it took him more than a year to close his first deal, and he was ready to give up until things started to pick up. It was at Whitbread-Nolan where he met Paris, and the pair eventually decided to strike out on their own.

They worked well together, with Paris focusing on the operations side of the business while Hauspurg turned his attention to closing deals and mentoring brokers.

Aside from his real estate work, Hauspurg was also very involved in charities and served on the board of the JCCA (formerly known as the Jewish Child Care Association) and was its chairman for six years.

“We were so involved in so many philanthropic things that came from his heart,” Paris said. “He was all about giving back.”

In his spare time, Hauspurg enjoyed mountain biking, horseback riding, yoga and fishing, which Paris said was his “true calling.”

Aside from his wife, Hauspurg is survived by his two children and two grandchildren.

“He was a larger-than-life personality,” Paris said. “His biggest joy was taking care of people and making things wonderful.”