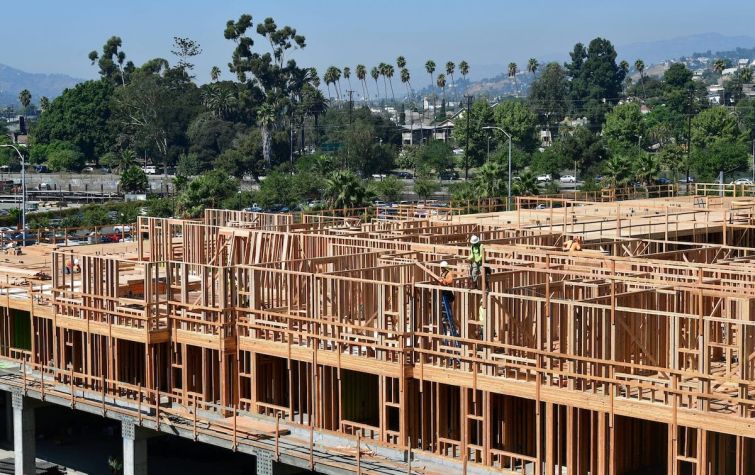 Some 57 percent of multifamily developers who responded to a National Multifamily Housing Council survey released in November reported construction delays in the jurisdictions where they operate, due to the price of materials as well as other factors, such as permitting delays.

Lumber prices in the United States have soared to record highs this year, with the most recent producer price index of the Bureau of Labor Statistics showing an approximately 50 percent jump since the outset of the pandemic.

The price spikes have to do with lumber mills closing for a long period of time, as well as demand from DIY builders who suddenly had time on their hands.

Additionally, softwood lumber arriving from Canada is seeing a 20 percent tariff, which is adding to the challenges.

The higher costs and other factors have put many projects on hold around the Washington, D.C., region, never mind nationally.

In the NMHC survey, a majority of respondents reported pausing at least one construction project since mid-March, with 26 percent noting that they’ve paused projects but will definitely resume. Nine percent have paused projects and are uncertain about resuming, while an additional 31 percent paused operations earlier in the pandemic but have since resumed.

“There are still pockets of significant concern, as we are seeing unpredictable prices, in some cases, and economic conditions that are top of mind,” Paula Cino, NMHC’s vice president for construction, development and land use policy, told Commercial Observer. “We are seeing continued delays and delays of new starts, which are potentially problematic.”

Beyond higher prices, COVID has caused numerous permitting delays as well, plus economic uncertainty and a decrease in construction financing opportunities.

This is the fifth survey NMHC has conducted since the pandemic hit, and the data has remained fairly consistent in terms of delays, with the delays being an average of six months.

“Some of the notable changes is the delays in permitting has been creeping up,” Caitlin Sugrue Walter, NMHC’s vice president of research, told CO. “Starting in the first survey, it was at 76 percent, but we’re up to 90 percent with the latest one.”

Additionally, 59 percent of respondents were reporting delays in starts back in April; now, it’s 77 percent. The two biggest factors in these delays were permitting and entitlement processes.

“Different jurisdictions are at different paces in terms of how they’re doing things,” Walter said. “Also, economic uncertainty. Availability of construction financing was another reason cited, because this is a new situation everyone is trying to get a handle on.”

Some 80 percent of respondents, too, reported an overall lack of materials impacting their projects. This also has increased substantially since the first report, with prices going up each month.

“The type of materials that are in short supply has changed over the course of the pandemic,” Walter said. “In the very beginning, the most commonly cited one was elevator parts, because they are manufactured in Italy. That has not been noted in any of the more recent surveys though.”

At the beginning of the pandemic, any materials coming out of Europe or Asia were in great demand, but things are not as troublesome as they once were.

Cino noted that the latest report showed lumber prices have most likely peaked, and the supply chain is more robust. However, appliances across the board are harder to come by, especially refrigerators.

“These may be related to manufacturing shutdowns, or miscalculations in just how robust construction would remain throughout this period,” she said.

Construction in the D.C. multifamily sector isn’t much different than what NMHC is reporting nationally, and what’s going on is more urban core vs. suburbs, according to Walter. The recent presidential election and the upcoming change in administration will most likely have some impact on what’s ahead.

“We’ve been talking about the need for a new relief package in the housing space for a lot of reasons, and we look forward to working with a new Congress and administration,” Cino said. “As we get into this next policy-making phase, we need to focus on how to drive investment to multifamily development and break down those barriers to development. That means look past things like rent control; look forward to better infrastructure; better alignment of federal, state and local policies; and land use policies that really foster multifamily development.”

While there is greater participation of NMHC members in the suburban markets, Cino doesn’t think you can count out the urban markets, which is important to the D.C. region.

With hope on the horizon for a better 2021, especially with a vaccine, the expectation is that multifamily developers will continue to pursue urban core projects.

At the national level, Cino noted the multifamily space seems pretty resilient, and NMHC members are reporting that they are still going after new development deals and new construction.

“I think there’s a feeling that, as we get into the 2021 space, they can better normalize the operations,” Cino said. “There’s a high level of optimism.”