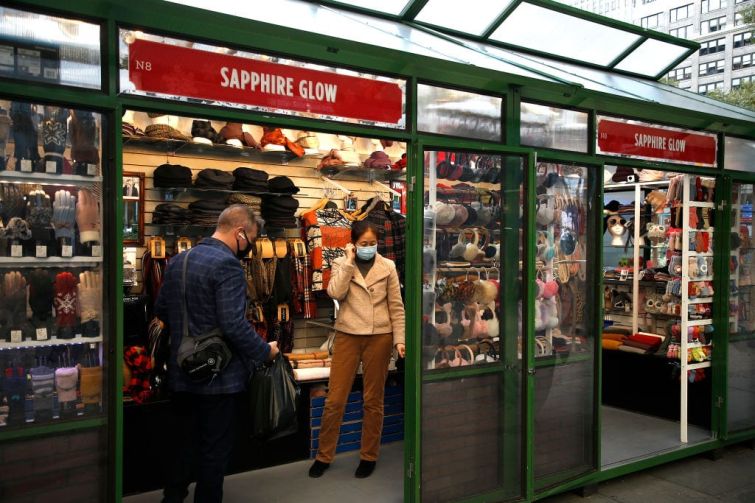 Shoppers are expected to spend an average of 20 percent less this holiday season, as the pandemic hits consumers' wallets. Shown here is the holiday market at Bryant Park, which opened last week. Photo: John Lamparski/Getty Images

With COVID-19 devastating the U.S. economy and keeping many would-be customers at home this year, 44 percent of shoppers nationwide expect to spend less on gifts and other holiday-related merchandise than they did last year, according to a new JLL report.

The brokerage’s retail research team explained that the projected decline is consistent with shoppers shifting their overall habits during the pandemic toward essentials like groceries and home improvement items, along with products that make quarantine more bearable, like furniture, electronics and other kinds of home goods. Nearly 47 percent of shoppers surveyed planned to cancel their holiday travel this season, too.

The average consumer plans to spend $694 this season, representing a 20 percent decline from last year’s typical budget of $874. Besides the 44 percent of people who plan to spend less, 34 percent of people surveyed plan to keep their holiday spending at the same level as 2019. Only 10.6 percent of Americans said they expect to spend more than last year.

JLL’s chief economist, Ryan Severino, laid out three different retail sales scenarios, depending on whether Congress passes a federal stimulus package in the next month and how much COVID spreads in the near future. He projected retail sales growth of 1.5 percent to 2.5 percent if the pandemic doesn’t worsen and “there is some minor fiscal stimulus from the federal government.”

His “moderate scenario” involved retail sales growth of up to 1.5 percent if coronavirus cases spike, but cities and states avoid imposing the severe lockdowns and restrictions that became widespread last spring.

And, if COVID cases increase dramatically, he predicted that retail sales could fall as much as 1.5 percent by the end of 2020.

Millennials and young Gen Xers in their prime spending years — which ranges from ages 30 to 44 — will cut their spending by 31 percent compared to 2019. That’s more than any other age cohort, the report noted. Americans over age 60 will reduce their spending the least, at 13.5 percent, followed by young adults in the 18 to 29 age group, who are expected to spend 14.5 percent less than last year.

E-commerce also continues to corner the holiday-shopping market. The number of shoppers who plan to shop at an online-only retailer like Amazon rose from 42 percent last year to 56 percent this year. And 49 percent of Americans expect to order online from a retailer that has brick-and-mortar stores, like Best Buy, up from just 25 percent last year. However, 49 percent of consumers reported that they plan to do some in-store shopping in 2020, only a slight decrease from last year’s 52 percent.

Amazon, Target and Walmart were at the top of the holiday shopping heap last year, and they will remain there for 2020. All three retailers will see significant boosts in shoppers compared to last year, likely because of their strong e-commerce operations and competitive prices, the JLL report said. Fifty four percent of shoppers named Amazon as one of their top holiday retailers this year, up from 38 percent last year. Walmart saw a smaller but still significant increase, to 47 percent of shoppers choosing the mega-chain this year, from 36 percent last year.

When it comes to in-person shopping, discount stores, electronics outlets and local boutiques will attract the lion’s share of consumers. Three-quarters of people surveyed expect to shop in-person at a discount store, and roughly one-third plan to go to a brick-and-mortar electronics store. And roughly one-quarter of respondents plan to holiday shop at a small, local store in-person.