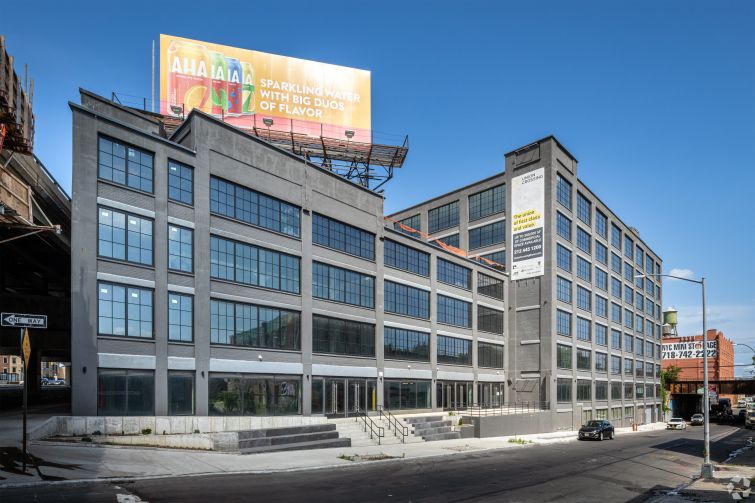 The $78.6 million sub-performing loan on 825 East 141st Street — also known as Union Crossing — is up for sale, Commercial Observer has learned.

The 282,000-square-foot former warehouse is located in Port Morris in the South Bronx, at the corner of Bruckner Boulevard and East 141st Street. It stands nine stories tall, and comprises 256,655 square feet of office space plus 25,816 square feet of retail space.

Originally constructed as a baking facility for A&P grocery store in 1916, the building was then used as a warehouse for food processing equipment, before eventually being acquired by the current ownership group — Altmark Group, Bluestone Group and Galil management — in 2016 for $40 million. Madison Realty Capital has a preferred equity position in the deal.

A $45 million renovation of the property was then undertaken post-acquisition, transforming it into a mixed-use building that today comprises creative office, light industrial, retail and restaurant spaces.

In April 2019, Crain’s New York Business reported that ownership had hired CBRE to market the property for sale. What happened within that sales process couldn’t immediately be ascertained, but LibreMax provided a $85 million refinance this January, which provided funding for continued renovations and leasing commissions, The Real Deal reported.

The refi followed the signing of Westhab, a community development non-profit organization, as Union Crossing’s first tenant. Westhab signed a 10-year, 8,233-square-foot lease at the property in November 2019. The space hosts Westhab’s 400 New York City employees, who are scattered across the five boroughs, in one place for staff meetings and training.

“We serve several communities across New York City on a constant basis. This central office space will help us streamline our efforts and commitment to New Yorkers in need,” Westhab President and CEO Richard Nightingale said at the time of the lease signing. “We’re happy to have found a modern space that accommodates our growing needs in such a key location for our organization.”

Officials at Madison Realty Capital declined to comment. Officials at Altmark, Bluestone and Galil didn’t immediately respond to a request for comment.