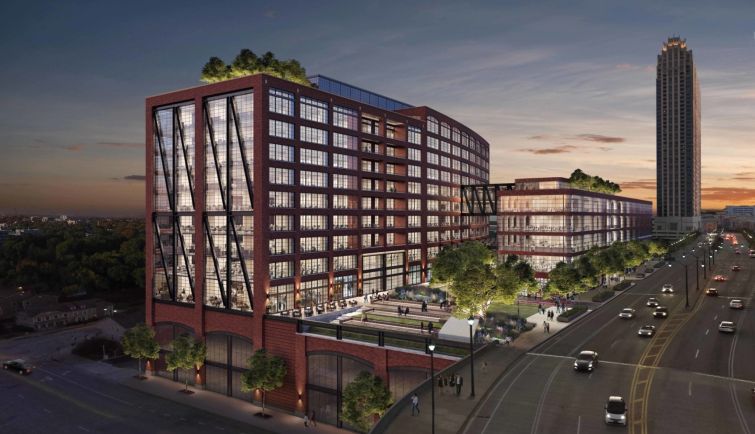 Atlanta’s veritable potpourri of industries is a major reason that its office market continues to chug along through the COVID-19 pandemic, analysts say. If the market had to rely on one or two, it might have buckled instead of seeing what looks, right now, like a short drop in leasing activity ahead of a steady recovery.

Software giant Microsoft took 523,511 square feet over two, full buildings in the Atlantic Yards office development project at 170 and 200 17th Street NW in Atlanta’s Midtown submarket. The company is expected to move in next summer.

Atlantic Yards is a joint development project from Hines and Invesco Real Estate. Hartshorne Plunkard Architecture is the design architect, and Wakefield Beasley & Associates are the architects of record. The value of the lease was defined as around $75 million, according to Commercial Property Executive.

Smith, Gambrell & Russell, one of the oldest law firms in Atlanta, took 102,320 square feet at the $530 million mixed-use project at 1105 West Peachtree Street, which Selig Enterprises is developing and hopes to complete in the third quarter of 2021. Rule Joy Trammell + Rubio is the architect on the project.

SGR will take five floors in the 31-story tower, where Google will also occupy five floors, and is expected to relocate from its current offices at the Promenade building at 1230 Peachtree Street NE sometime next year. Shea Meddin, Andrew Ghertner, Carla Williams and John Izard Jr. of Cushman & Wakefield represented Smith, Gambrell & Russell, according to Selig Enterprises. Chris Ahrenkiel and Steve Baile of Selig Enterprises represented the developer.

Another law firm, Lewis Brisbois Bisgaard & Smith, is relocating its Atlanta offices from 1180 Peachtree Street NE to 48,000 square feet on the 46th and 47th floors at Bank of America Plaza at 600 Peachtree Street NE. The firm is expected to move in April 2021. Jeff Keppen and Nicole Goldsmith of CBRE represented the landlord, Shorenstein Properties; and Jonathan Larsen, Rick Nash, Chandler Larsen and Molly Millard of Avison Young represented Lewis Brisbois.

LeasePlan USA, an international manager of car fleets, renewed its 81,615 of space at 1165 Sanctuary Parkway in Alpharetta.

Emory University took 69,782 square feet over four floors at The Dilweg Companies’ 141,582-square-foot property 250 East Ponce de Leon Avenue in Decatur, which will serve as the home of the new Nell Hodgson Woodruff School of Nursing. The school announced that the center will “act as a hub for students and Emory health care nurses,” and is supposed to have 1,400 students enrolled by 2025.

“The new simulation and skills lab at the center will include mock hospital settings with state-of-the-art equipment,” Emory University said in a press release. “When finished, it will be the largest simulation center in Metro Atlanta.”

The Beck Group will be renovating and designing the space for Emory. Scott O’Halloran, Michael Tucker and Scotland Wright of Scotland Wright Associates represented Emory in the deal, while 250 East Ponce and The Dilweg Companies were repped by R. Kirk Rich and Chris Godfrey of Avison Young.

Staying in the health-care field, medical staffing firm Soliant Health signed a 10-year lease for a new, national headquarters of more than 51,419 square feet at 5550 Peachtree Parkway in Peachtree Corners. The company expects to fully occupy the new space by year’s end.

Finally, furniture colossus Rooms To Go announced the relocation of its Atlanta office from Dunwoody to 60,000 square feet in a 16-story tower at 4004 Perimeter Summit in Brookhaven. Bryan Heller and Sabrina Gibson of CBRE represented the landlords, Seven Oaks Company and GE, along with Randy Holmes and Andrew Pearson of Seven Oaks. David Rubenstein, John Flack and Bo Keatley of Savills represented Rooms To Go.