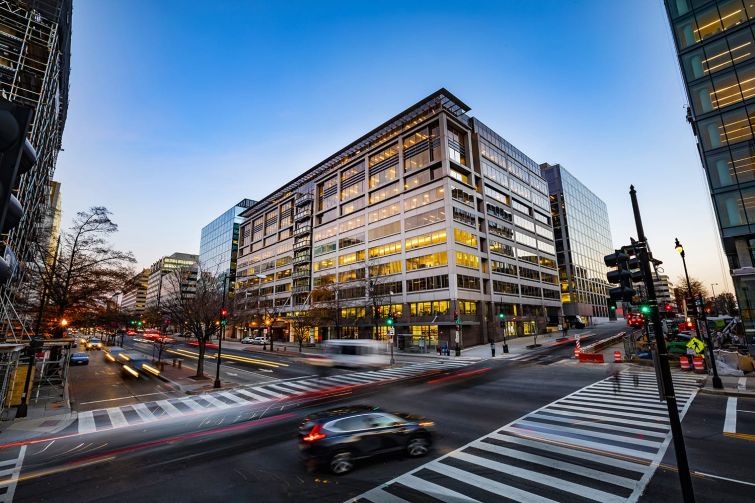 Public affairs software company Quorum has signed an approximately 34,000-square-foot lease at One Thomas Circle, a 229,663-square-foot office building in Washington, D.C., that LaSalle Investment Management owns and that it recently reconfigured to meet challenges associated with COVID-19

In the same building, nonprofit GlobalGiving signed a 16,000-square-foot lease. JLL represented the landlord in both deals. No other lease information was revealed.

“The leases mean a ton in this environment,” Doug Mueller, executive managing director for brokerage for JLL, told Commercial Observer. “They are a huge validation of the overall renovation with a lobby which is built to be a functional space for tenants to work. The third-floor courtyard renovation allows for outdoor work as well, and this also reaffirms floorplate quality, which provides an abundance of natural light due to central open-air core.”

LaSalle also announced that law firm Fox Rothschild has signed for approximately 19,000 square feet at the 11-story 2020 K Street NW. JLL again facilitated the deal. Like with One Thomas Circle, the building was also reconfigured to deal with COVID.

“This is a huge win as it was a hotly contested deal and again reaffirms the renovation concept with a huge conference center and tenant-only social distance work environment,” Mueller said.

In all, nearly 70,000 square feet of office leases were signed during the pandemic lockdown, which signals positive signs ahead for the D.C. office market.

“Considering the current market conditions, it is reassuring to see this leasing activity in our portfolio,” Brett Bowman, LaSalle’s associate vice president, said in a release. “This activity reinforces our strategic investment in core real estate in one of the most resilient markets in the country: Washington, DC.”

Mueller added that “office isn’t going anywhere” and believes owners who have doubled down on creating unique, exciting workspaces will “continue to see deals done.”