The USPS’ Real Estate: What It Owns and What It’s Selling 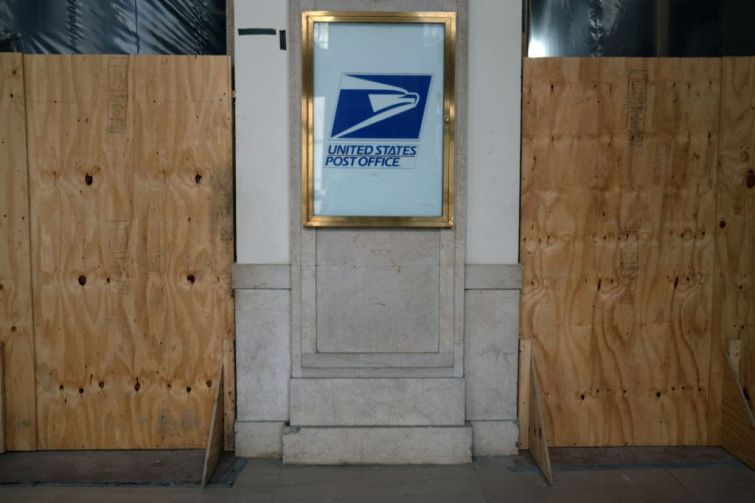 The block-size art deco building in downtown Allentown, Penn., is one of nine properties that the United States Postal Service is currently selling. Built in 1934 solely as a post office, the building served as the town’s nerve center for many years. Today, mail delivery operations occupy just 5,000 square feet of the 96,500-square-foot property.

After the mayor approved the potential sale of the building in 2018, residents successfully campaigned to protect the historic aspects of the structure, including its limestone and granite facade, tile flooring, and ornamental ceiling, according to news reports. In the lobby, eight murals depicting life in the Lehigh Valley will remain USPS property, even once the building is sold.

The Allentown building is one of the thousands of properties that the USPS owns, spanning every state in the union and everything from trophy properties in Manhattan to a 60-foot trailer in Hatch, Utah, near the entrance to the Bryce Canyon National Park. The post office and its broker, JLL, are looking to sell or to lease some of this portfolio in an ongoing campaign to unleash capital.

The USPS is one of the largest real estate holders in the nation, in fact, with a portfolio of 8,393 properties spanning 193 million square feet as of December 2019, according to the USPS’s annual report to congress. The agency also leases over 23,000 locations across the country, according to the report, for a combination of 31,000 retail outposts, in addition to offices, processing centers, and other facilities.

It’s also, ostensibly, in one of the safest real estate sectors to be in right now: logistics and last-mile delivery. In 2019, the USPS handled 143 billion pieces of mail and 6.2 billion packages, double Amazon’s volume. And yet, while Amazon is rapidly expanding its real estate footprint, and hailed as the savior of the industrial, and even retail sectors, the USPS is flailing.

Despite its valuable real estate portfolio, and massive operations, the USPS, which is not funded by tax dollars, has been losing money for years, largely due to a combination of mail volume declining and a 2006 rule that forced the USPS to fund its  employees’ pensions for 75 years.

The USPS is currently the subject of a fierce political debate, too, as the coronavirus pandemic has compelled many states to expand vote-by-mail access for the fall elections. Democrats proposed a bill that would provide $25 billion in funding to help facilitate voting by mail. President Trump promised to block it, suggesting that voting by mail would benefit Democrats and has called the USPS a “joke.” On Monday, the Trump-appointed postmaster general, Louis DeJoy, testified before the House Oversight Committee after a variety of changes he initiated led to delays and concerns that the changes would impact voting in November.

The USPS has been trying to unload some of its older real estate in order to raise capital, according to sources. It unloaded 55 properties between 2017 and 2019, according to the congressional report, through JLL and the federal General Services Administration (GSA), which also sells USPS-owned properties.

Of the properties owned by the USPS, 8,220 are used as post offices, 316 as administrative offices, and 302 as mail processing centers, with many properties serving more than one function, according to USPS data analyzed by Commercial Observer. (There are also 62 offices for the Inspection Service, which is the police arm of the Postal Service and the agency that arrested Trump adviser Steve Bannon and two others for alleged fraud earlier this month.)

Many postal properties are deemed to have historic and architectural value, with the oldest USPS-owned property dating to 1833, and over 120 post offices are on the National Register of Historic Places. That includes the Old Post Office in Washington, D.C., which twas leased to Trump in 2013, and is now the Trump International Hotel. It also includes the Farley Post Office in New York, the two-block-long site that opened in 1914 next to Penn Station. Vornado Realty Trust is now redeveloping it into a transit hall as an extension to Penn Station as well as into Facebook’s newest offices.

Another post office on the National Register is one of the latest post office properties to come to market. The Richardsonian Romanesque-style Old Post Office and Courthouse in Martinsburg, W. Va., was listed on the GSA website earlier in August. Built in 1895, with four distinctive turrets, it operated as a courthouse until 1961, and was deeded to an arts nonprofit in 2001 at no cost.

“Properties that USPS decides to put on the open market for sale are handled by JLL,” a USPS spokesperson for explained. “The only time we would use GSA for a sale is when we choose to put the property up for auction.”

JLL, which was designated as the USPS’s sole broker in 2017, has 334 spaces listed for lease or sale. JLL took over the contract from CBRE, after the l agency’s inspector general released a report criticizing CBRE for collecting  commissions from both the USPS and lessors, as well as other issues with the reliability of appraisals and integration with facilities management, per the report.

JLL manages both landlord and tenant deals, a JLL broker confirmed. At its most recent count, the USPS had 23,118 active leases, spanning 79 million square feet, according to the USPS annual report. The USPS has executed an average of 4,600 new leases per year since 2015, and has an average of 4,773 lease expirations each year through 2025, according to USPS data, which was last updated in October.

One of USPS’s largest leases is a 401,000-square-foot lease at a former USPS processing facility in Portland, Ore. The City of Portland’s development arm purchased the 13-acre campus  for $88 million in 2016, and agreed to lease back the site for $1 until alternative facilities were identified and constructed, according to the sale agreement. Proceeds from the sale will go towards a new $157 million USPS facility at a former golfing green.

Plans for the former USPS site, which is part of a broader redevelopment initiative, have included an urban forest, sports fields and affordable housing. The post office campus, which was Oregon’s main mail processing center, will be demolished, and construction is scheduled to begin in 2022.

JLL declined to comment on its dealings with the USPS. The USPS clarified details regarding its data but did not provide comment on its real estate strategy.