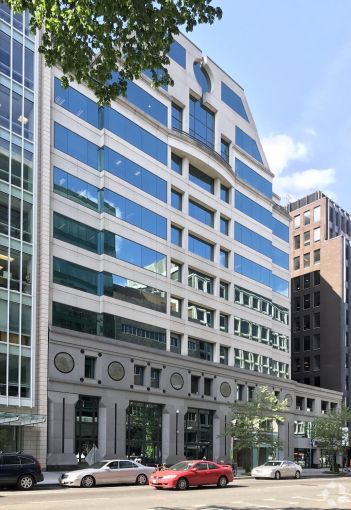 Texas A&M University has signed a five-floor, 47,418-square-foot lease at 1620 L Street NW, a 12-story office building in Washington, D.C., with landlord Liberty Mutual, according to Newmark Knight Frank, which represented the tenant in the deal.

“The space offered street-level presence allowing for branding opportunities with a dedicated entrance as well as a downtown campus feel across multiple floors of the building,” Chris Lucey, a managing director at NKF, told Commercial Observer.

The deal marks Texas A&M’s first campus in D.C. The space will serve as a new teaching site for the university’s Bush School of Government and Public Service, and include a welcome center, administrative office space, meeting rooms, student amenities and special events.

The 176,000-square-foot building was built in 1989, and designed by Smith, Segreti, Tepper, McMahon & Harned. It recently underwent a renovation that included the upgrading of its lobby and amenities. The building also features an outdoor terrace on the third floor, a state-of-the-art gym and a tenant-only conference facility.

The property is situated in the Golden Triangle Business Improvement District and is two blocks from the Farragut North Metro station. It’s also close to numerous government buildings, which will help Texas A&M students get real-world experience in government and public service in the heart of the nation’s capital, NKF said.

“The location was ideal due to its proximity to the White House and its central location easily accessible for current and prospective students, alumni and distinguished guests,” Lucey said.

According to NKF Research, leasing for the region’s Class A office market registered 594,600 square feet of net absorption during the second quarter of this year with a positive net demand of 215,129 square feet in the District of Columbia alone.