NYC Restaurants Plead For a Plan For Return of Indoor Dining 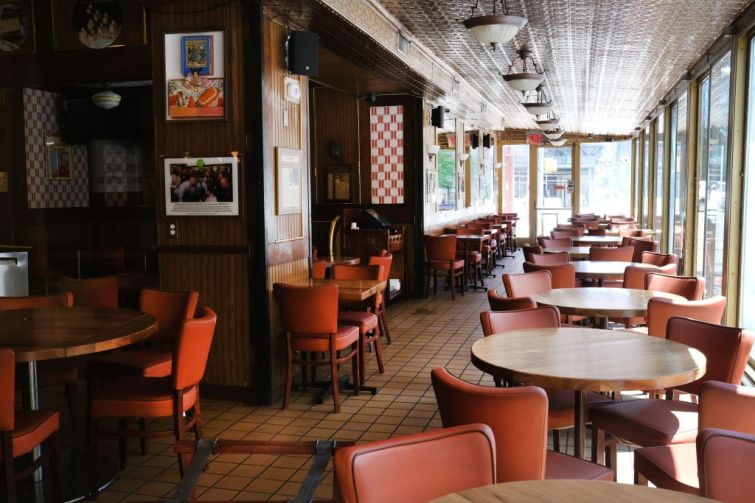 Restaurant owners around the city pleaded with the city and state to quickly develop a plan for the return of indoor dining. Photo: Spencer Platt/Getty Images

Restaurant owners around New York City called on the local government to quickly develop a plan to bring back indoor dining, with one trade group considering a lawsuit to force its return.

New York indefinitely postponed the return of indoor dining in the city on July 6 as coronavirus cases spiked around the country. While other counties in the state have resumed indoor dining — at a reduced capacity — New York City still does not have a plan for it to come back.

“We’re not asking to open tomorrow, we’re simply asking for the simplest thing: a plan,” Tren’ness Woods-Black, the owner of legendary Harlem eatery Sylvia’s, said during a press conference today organized by the nonprofit New York City Hospitality Alliance. “Some input, some direction, some light at the end of the tunnel.”

Andrew Rigie, executive director of the New York City Hospitality Alliance, said it would rather work cooperatively with local government on indoor dining’s return, but is considering a lawsuit to force the state’s hand.

“Public schools are opening, gyms are opening, we need a plan for New York City restaurants, and not having one is unacceptable,” Rigie said. “Our elected leaders and government leaders should provide that type of guidance and support.”

Bars and restaurants around New York City have been reeling since emergency measures to curb the spread of the coronavirus forced them to switch to take-out or delivery-only models in mid-March.

The New York City Hospitality Alliance found that about 200,000 restaurant workers have been laid off in the wake of the pandemic, about 60 percent of the total jobs in the industry, while owners struggle to pay bills.

More than 80 percent of restaurants and bars surveyed by the group couldn’t pay full rent in July, with 37 percent reporting paying zero rent last month. Rigie estimates thousands of eateries will be forced to close around the city.

Officials have allowed for the expansion of outdoor dining in recent months, which owners said has helped but isn’t a replacement for indoor dining. Plus, that business could dry up soon as the summer comes to an end.

“While outdoor dining is a lifeline, it’s definitely not a solution,” said George Constantinou, the owner of Bogota Latin Bistro, Miti Miti and Medusa in Brooklyn. “I continue to struggle to pay bills, payroll and vendors.

Several restaurant owners expressed frustration that other counties in the state have been allowed to resume indoor dining while the five counties that comprise New York City haven’t, a comparison Gov. Andrew Cuomo called “absurd” today.

Mayor Bill de Blasio previously said indoor dining might not return until a coronavirus vaccine is ready, with senior adviser Dr. Jay Varma adding the reason for the delayed return is how quickly COVID-19 spreads indoors.

“When you look at the data, really, from across the world, there is no doubt, one very common setting in which infections occur – and not just individual infections, but what we call super spreading events, where one person can transmit to five, 10, 15, or 20 people – and those are settings where there was indoor dining and drinking,” Varma said at a press conference yesterday. “We know that any place that is indoors is riskier than any place outdoors and we know that anywhere where you can’t wear face protection is riskier than a place where you can. And, of course, when people are eating and drinking, they can’t wear that type of facial protection.”

But Rigie and other restaurant owners aren’t pushing to quickly restart indoor dining, just guidance on when it will return so they can plan ahead.

“We have no rules right now,” said Blair Papagni, the owner of Greenpoint, Brooklyn, eatery Anella. “I’m not a doctor, I’m not saying let me seat inside tomorrow. Given that we have other examples of what’s working, give us a plan.”