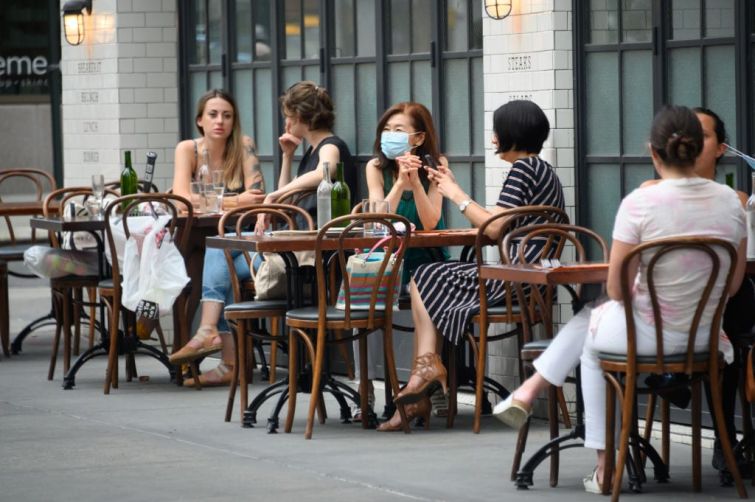 The federal unemployment rate has fallen as New York and other states reopen after coronavirus-induced business closures. Here, masked New Yorkers sit outside at The Smith on the Upper East Side. Photo: Noam Galai/Getty Images

The U.S. economy is doing better than expected amid a rising surge in coronavirus cases nationwide. It gained 4.8 million jobs in June, as the unemployment rate dropped 2.2 percentage points to 11.1 percent.

While unemployment rates fell in May and June compared to the height of the layoffs in March and April, the number of unemployed Americans is up by 12 million since February, according to the latest report from the Bureau of Labor Statistics. The unemployment rate also remains at a historic high.

Economists surveyed by Bloomberg had predicted a gain of 3 million jobs and an unemployment rate of 12.3 percent, which means that the jobs report exceeded expectations.

A number of sectors saw large increases in jobs as much of the country reopened during May and June. Employment in hospitality and leisure surged by 2.1 million in June, with food and drinking establishments adding 1.5 million jobs last month. Retailers added 740,000 jobs last month, while payrolls in education and health services ticked up by 568,000. The construction industry also added 158,000 jobs in June, following a gain of 453,000 in May and a decline of 1.1 million jobs across March and April combined.

The BLS cautioned, however, that employment across all of these job categories is still down significantly compared to February. And economists are cautious about the positive upswing in job numbers.

“Today’s job figures were welcome news and were a step in the right direction, but there are still millions of jobs to be recovered in order for us to get back to pre-COVID levels of employment,” said Heidi Learner, the head of real assets research at CBRE Global Investors, in an email. “Rather than net job gains, I would characterize today’s figures as a recouping of prior months’ losses…With many states halting or scaling back their next phase of reopening, it is still too soon to know the full impact that this will have on small businesses and the economy as a whole.”

The agency has also struggled to collect accurate data during the pandemic. Responses to its household employment survey—which is conducted over the phone and in person—have declined 18 percentage points since the pandemic began. It has also reportedly misclassified furloughed workers as “being at work but not present—as if they were taking a vacation,” according to NBC News, instead of counting them as jobless or unemployed. The error has caused the federal Department of Labor to underestimate the actual number of jobless Americans, according to Bloomberg.

Meanwhile in New York, the outlook remains less than optimistic. The state labor department recently reported a 14.5 percent unemployment rate for May, with New York City’s unemployment rate at a record-high 18.2 percent. The Center for New York City Affairs released a report last week that argued the five boroughs are “experiencing deep and enduring unemployment mostly by low-income workers of color.” The city has lost 1.25 million jobs since February, which is the sharpest job decline that has occurred since the 1930s, the report said. However, the most recent state data doesn’t include numbers for June, when much of the state and the city began to reopen for business.