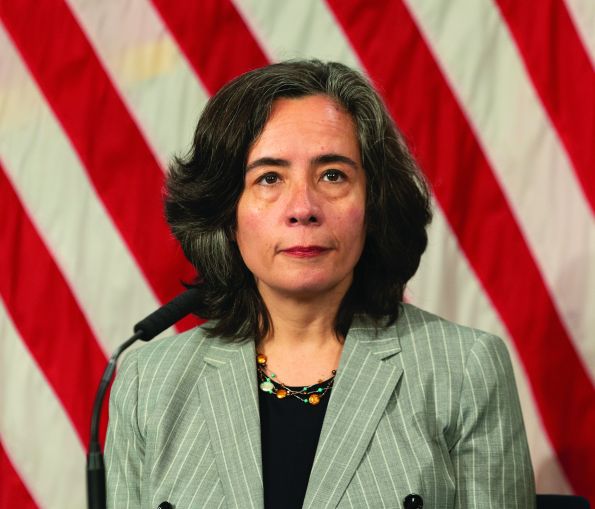 For a few months the most trusted man in America was a Brooklyn-born septuagenarian who came on television and spoke about infectious disease.

How does an infectious disease expert wind up on a list of real estate brokers and landlords? It was his knowledge and wisdom that governors and federal officials relied on when they were deciding just how dangerous it would be to ride the subway, or open an office, or stop by a Starbucks.

But Dr. Fauci or his fellow doc celeb, Dr. Deborah Birx, are hardly the only medical voices that have become important during this crisis. Here are the names of the M.D.s who have tried to steer New York toward safety.

When the public was made vaguely aware of a mysterious flu-like virus emanating from China this winter, New York’s public health experts began mapping out scenarios and studying its effects.

For the next several weeks, Zucker was a constant presence at Gov. Andrew Cuomo’s daily coronavirus briefings, providing technical answers about the characteristics and transmissibility of the virus as well as the importance of ventilators and other equipment.

It was the most prominent role Zucker has played in state governance since 2014 when he completed his review of whether the state should permit hydraulic fracking. Cuomo banned the practice on Zucker’s input.

Once the coronavirus began to spread across New York, Zucker was waking up at 4:30 a.m. to analyze new lab results and coordinate meetings with health care professionals about what kind of guidance to offer the public.

“I always felt if you can improve the life of others — whether an individual or many — you should,” he told Newsday. “I learned practicing clinical medicine that I have to do everything possible … it’s our role in society.”

Some of that advice has since been questioned, particularly the state’s order that forced nursing homes to admit COVID-19 patients, although Zucker pushed back, arguing that sickened staff brought the virus to nursing facilities, not readmitted patients.

Now that the peak of the pandemic is hopefully behind the city, health leaders are guiding New York through the Phase 4 reopening plan, while developing proposals to safely reopen schools this fall.

If the coronavirus surge that is roiling the rest of the country reaches New York sooner, Zucker will undoubtedly be called back into action.

When New York became the global epicenter of the coronavirus outbreak, the city’s health commissioner was thrust into the spotlight.

“One of the most challenging things about COVID-19 is how relatively little we knew in the beginning of the pandemic and how quickly the little we knew changed with each passing day,” Barbot told Commercial Observer. “It made providing clear and consistent guidance to New Yorkers a daily challenge.”

Barbot, a Yale-educated pediatrician who ran Baltimore’s health department, initially sought to reassure a jittery public once coronavirus cases began to be detected outside of China’s Wuhan province. When the city entered into a mandatory coronavirus shutdown on March 20, Barbot cautioned against wearing face masks all the time.

But when coronavirus cases began to mount in April, she adopted a more urgent message for New Yorkers to socially distance and sanitize regularly. And her team of health experts continued to describe the array of symptoms of an evolving disease to the public, track the scope of the pandemic to identify future outbreaks, and seek out enough protective equipment for medical workers as supplies dwindled.

“We messaged the importance of hand hygiene, staying home if ill and, shortly thereafter, adding using a face covering and maintaining physical distance,” she told CO. “Those will continue to be the pillars of this response, which will give us the best opportunity to bring this pandemic to an end as quickly as possible.”

The tensions involved in keeping the population safe sometimes made it into public view. Barbot and Police Commissioner Dermot Shea clashed in private conversations over providing masks for police officers during an acute PPE shortage, remarks for which Barbot later apologized. And the mayor perplexingly chose to have Health and Hospitals oversee the city’s contact tracing program instead of the health department, which had managed similar efforts in the past.

Cases have dwindled in the four months after the shutdown, although city health leaders aren’t taking the lull for granted. Barbot and others remain vigilant toward monitoring the spread of the virus among young people this summer and developing a safe reopening plan for child care facilities and schools for the fall.

“We must continue fortifying those bonds to bring our city out of this dark time, and keep ourselves and our loved ones safe,” she said. “Emerging from this public health emergency depends on every New Yorker’s creativity and grit.”

When coronavirus cases were first being detected in New York in spring, Mitchell Katz knew the city’s hospital system would face an enormous challenge.

Public hospital emergency rooms and clinics are usually the first stop for hundreds of thousands of the city’s most vulnerable residents, including nearly half a million people who are uninsured.

But the spread of COVID-19 brought an onslaught of New Yorkers to hospitals in March and April, filling intensive care units to capacity while beleaguered health care workers struggled to keep basic supplies and medical equipment on hand.

Katz and other city leaders sought to get public hospitals the ventilators, masks, and other protective equipment needed to weather the crisis while shifting patients from overcrowded medical centers to less full ones.

When the peak subsided, Mayor de Blasio awarded, in a rather contentious decision, the city’s contact tracing program to Health + Hospitals instead of his health department. Katz and his health workers would become responsible for hiring some 2,500 people to track and monitor the contacts of anyone who became infected with coronavirus.

Katz continues to lobby for more resources for hospitals, especially as coronavirus cases spike in other parts of the country and New York braces for a potential second wave this fall.

He defended the performance of the system’s 11 hospitals during the pandemic, telling the New York Times, “Our hospitals worked heroically to keep people alive” while acknowledging the toll of the virus revealed disparities between under- resourced public hospitals and lavish private hospitals.