The 250,000-square-foot retail condo is scheduled to be at virtual auction on June 30 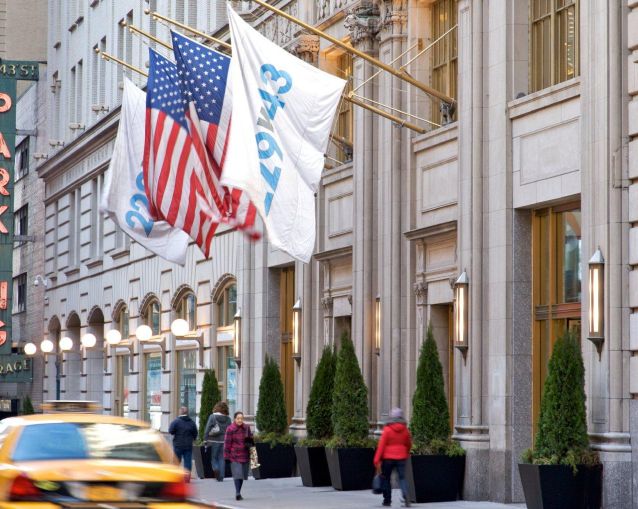 The massive retail condominium owned by Kushner Companies at 229 West 43rd Street in Midtown Manhattan is headed for a Uniform Commercial Code (UCC) foreclosure auction scheduled for June 30, according to an auction notice from JLL, which is marketing the sale.

The auction— which fast-tracks the foreclosure timeline — is being pursued by one of the property’s mezzanine lenders, Paramount Group, under the entity 229 WEST FUND VIII LP. Paramount had provided a $70 million mezzanine loan as part of larger refinancing in 2016.

The 251,000-square-foot asset will be sold at a “as is, where is” basis — all cash — at a password-protected virtual Zoom UCC auction that had previously been postponed and was originally scheduled for April 30, according to the listing, which was published by Commercial Mortgage Alert.

A representative for Kushner Companies was not immediately available to answer a request for comment. Officials at Paramount declined to comment.

Kushner made a splash with its $296 million purchase of the condo in the fall 2015, receiving a $470 million appraisal not long after closing the acquisition and then subsequently locking in a $370 million debt package a year later to refinance the asset (Kushner bought it from Africa Israel USA, a U.S. subsidiary of Israeli investment firm Africa Israel Investments, at a 7.53 percent cap rate, according to data from CoStar Group.) That package included a $285 million commercial mortgage-backed securities (CMBS) loan from Deutsche Bank as well as Paramount’s $70 million mezzanine loan and a separate $15 million mezz loan from SL Green Realty Corp., as CO previously reported.

A representative for SL Green did not respond to an inquiry.

In the middle of an unpredictable and volatile retail market last year that spilled into the early part of this year, that $285 million CMBS loan was sent to its special servicer KeyBank last December due to income struggles caused by tenancy financial troubles. Its transfer came after Kushner failed to fund “a shortfall on the loan’s debt service payments and required reserves,” according to a previous statement from Kroll Bond Rating Agency (KBRA) that was reported by CO. The loan itself — which had been previously watchlisted in Sept. 2017 — is split among four CMBS conduit transactions, including the JPMDB 2017-C5, the CD 2016-CD2, the CD 2017-CD3 and the CGCMT 2017-P7. At the time of the transfer, Kushner had also defaulted on the building’s junior mezzanine debt and was in negotiations with that lender, according to KBRA.

Not long after Kushner’s purchase, tenancy issues began to set in, muddying its cash flow outlook. In the first two years, the landlord had unfruitful experiences with two different celebrity chefs. Guy Fieri’s Guy’s American Kitchen closed in 2017 after a 5-year-long stint at the location. And the landlord had also gotten embroiled in a lawsuit in early 2018 over leased space and rent payments with chef Todd English’s operating company Outstanding Hospitality Management. English had been selected to oversee a food hall there that never came to fruition.

These misses, coupled with eventual troubles with two of its largest tenants — experiential attractions in Gulliver’s Gate and National Geographic’s Ocean Odyssey — culminated in the special servicing transfer of the $285 million senior mortgage earlier this year.

Gulliver’s Gate, an exhibition space showcasing miniature sites of global attractions and famous pieces of real estate, filed for bankruptcy last October to overhaul its debt and possibly stave off an eviction at the site, per court filings reported at the time by Debtwire. In December, it was reported that Kushner, eager to take back the occupied space, which spans nearly 46,000 square feet, sought permission from a bankruptcy judge to reignite the eviction process, citing significant back rent owed by Gulliver’s. Prior to this dispute, in Dec. 2018, it had agreed to a reduced rent to ensure Gulliver would remain operational at the location through March 2024, but according to court filings and Debtwire’s reporting, Gulliver breached that agreement with continued missed monthly payments. In January, CO reported that Gulliver’s was still not paying rent, according to information from KBRA. CoStar has pegged Gulliver’s lease expiration at January 2031.

National Geographic operated a sea life exhibit at the site called Ocean Odyssey, which had defaulted on its lease and eventually came to an agreement with Kushner in the spring last year for reduced monthly payments — as of January, National Geographic was still struggling under that rate, according to servicer watchlist commentary.

Even so, as of last December, Kushner was able to stay above water with its senior debt service payments. Three days after the company fell $28,000 short on a $1.3 million payment to senior bondholders on Dec. 6, it came through with the money to cover, according to the servicer’s watchlist notes from December previously reported by CO.

The property’s remaining “performing” tenants include bowling alley Bowlmor — just over 31 percent of its rentable area — Guitar Center, which has leased about 11.3 percent of the space at the basement level, bar and restaurant The Ribbon, Haru Sushi and Los Tacos.