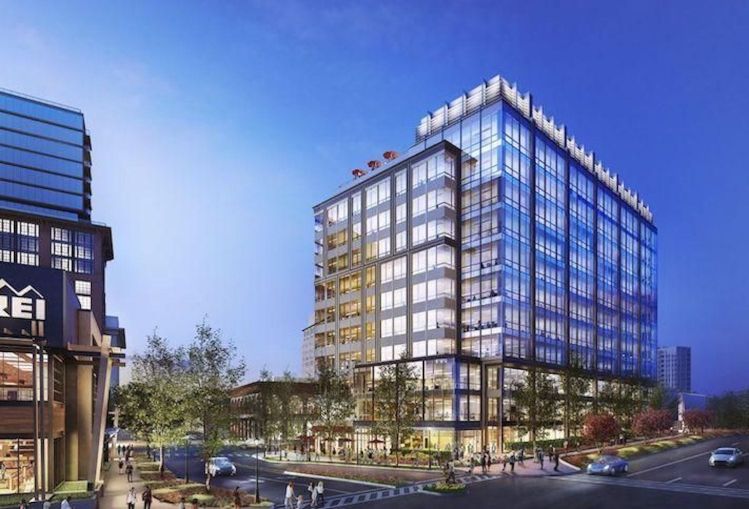 “909 Rose offers a great value proposition for new trophy office buildings in the region, offering a roughly 30 percent discount to downtown Bethesda trophy rents that are around $70 per square foot,” Jay Brinson, Federal Realty’s vice president of development, told Commercial Observer. “At $50 per square foot, 909 Rose and its highly curated and amenitized 24-acre neighborhood is a great way for firms to make a statement.”

The advisory firm will move into the building this fall, consolidating two offices currently at 8401 Connecticut Avenue in Chevy Chase, Md., and 7316 Wisconsin Avenue in Bethesda, Md.

“OneDigital combining their Chevy Chase and Bethesda locations to Pike & Rose is further validation that when you offer a best-in-class trophy office building…the building easily competes, and in this case, beats out alternative downtown Bethesda locations,” Brinson said.

Federal Realty broke ground on the 11-story building with ground-floor retail in 2018 with no pre-leases. The office building is part of the 24-acre Pike & Rose mixed-use development, which features 765 apartments, 99 condos, a 177-room hotel, 80,000 square feet of office space and more than 40 retailers.

Brinson noted that one of the aspects that drew OneDigital to the property is that it allows its employees and clients to avoid the dreaded commute into downtown Bethesda.

“The Pike & Rose neighborhood has great access to all of the major commuting routes,” Brinson said. “Beyond that, the building has been thoughtfully designed with the latest wellness features, including a fresh air filtration system that supports hospital-grade clean air circulation (in excess of MERV-13), and touch-less building entry and elevator access points.”

The building is close by to many shopping, dining and entertainment amenities, and there’s neighborhood Wi-Fi, allowing for expanded outdoor workspace beyond the four walls of the office space.