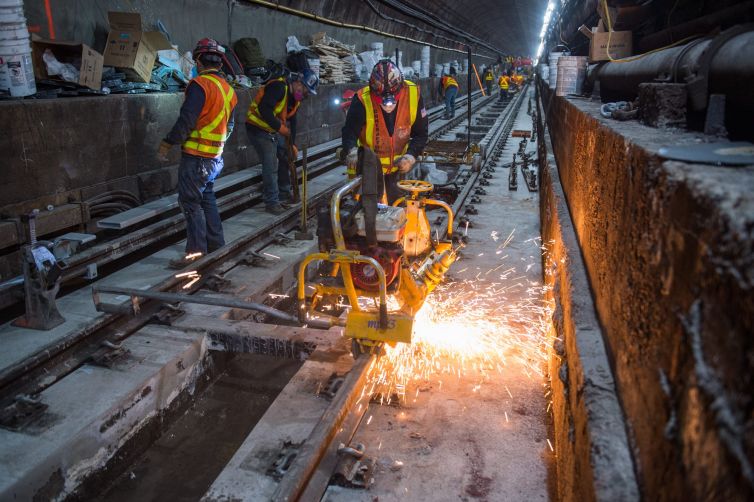 MTA has suspended work on most of its capital projects for the foreseeable future as it grapples with a major budget crisis. Photo: Trent Reeves/MTA Construction & Development

After the Metropolitan Transportation Authority froze spending on new capital projects yesterday, the construction industry saw a significant portion of its future revenue dry up.

The federal government is paying the state-run agency $3.9 billion, but the MTA is still looking at an $8 billion hole in its budget after ridership fell more than 90 percent on subways and commuter railroads during the pandemic, according to Gothamist/WNYC. Top MTA officials are hoping for another $3.9 billion from the federal government to cover operating expenses and the significant revenue shortfall created by the drop in riders and fares.

But in the meantime, MTA Chairman Pat Foye has announced that the agency has paused spending on future capital projects, including work on its current five-year capital plan and the $51.5 billion subway modernization plan from former New York City Transit chief Andy Byford. Construction industry groups are nervous about the move, which jeopardizes billions of dollars in public construction contracts and tens of thousands of construction jobs.

However, the MTA spending freeze does not include $2 billion in station upgrades and repairs that have already been contracted out, including repairing the F train’s underwater tunnel and installing elevators at 11 subway stations. Work on those projects is ongoing.

The agency’s construction spending was expected to top $8 billion this year, according to an October report from the New York Building Congress. Roughly 20 percent of New York City’s 264,000 construction workers are employed on public sector projects.

“If we don’t get HEROES funding or something similar soon, we are moving closer and closer to a fiscal cliff for the MTA capital program,” said Lieber. “In 2009 during the last financial crisis, which was much less severe, the capital budget got cut dramatically. And we know what happens, which is that in the decade that followed, service eroded. Those momentary cuts in investment, especially in an old system that needs state-of-good-repair investment, have dramatic long-term consequences. Service gets unreliable, things break down and our customers feel the consequences. If our leaders in Washington fail to act, the historic MTA capital plan… is at major risk.”

He added, “You can’t even put a dollar amount on what it would mean to the [construction] industry. There would be thousands upon thousands of people who would lose their jobs, from engineers to construction workers to architects.”

“The economics are clear,” said Coletti. “For every million dollars spent in construction, it generates 18 jobs in New York City. For every $1 spent on construction, $1.50 in economic activity is created. They’re good middle class jobs.”

The decision to freeze MTA construction will “be devastating for those contractors that predominantly do public work,” said the president of the contractor group. “When it makes all the sense in the world to fund the MTA and get their work going, they don’t have enough money. And the only place it can come from is Washington, D.C.”

Update: This story has been updated to reflect the fact that the MTA is halting spending on new capital projects, but work will continue on projects that have already been awarded to construction teams.