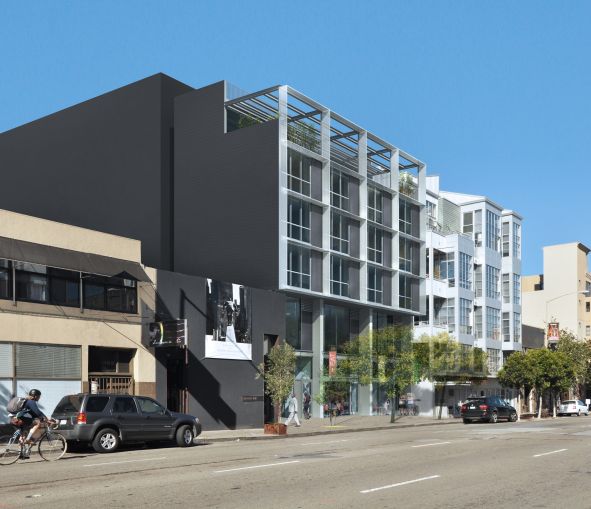 A rendering of the mixed-use development at 1178 Folsom Street in San Francisco. Courtesy: Columbia Pacific Advisors

The bridge lending operation of Seattle-based private real estate financier Columbia Pacific Advisors has refinanced a mixed-use, residential development in San Francisco after its previous lender stepped away from the transaction, according to information released by the lender.

The loan was made to San Francisco investor Erik Liu to refinance existing construction debt on his mixed-use rental project at 1178 Folsom Street in the city’s South of Market neighborhood and wrap up remaining construction activities.

Columbia stepped in to make the loan after previous lender Parkview Financial, a Los Angeles-based private bridge and construction lender, pulled out of the transaction due an extended construction timeline and because of COVID-19.

“We are actively seeking lending opportunities, and pleased to be able to navigate and close the transaction expeditiously to assist our borrower,” Will Nelson, a senior vice president of real estate lending at Columbia, said in a statement. “Despite the impacts of COVID-19, we believe in 1178 Folsom Street and the more affordable nature of its product, which provides quality apartments and amenities to residents in the popular SoMa neighborhood.”

Parkview CEO Paul Rahimian told CO that its previous construction loan, which it originated in 2017, was set to mature this month and that his group wasn’t comfortable keeping it on its books any longer given the current economic environment.

“We had it on our books for about two and a half years,” Rahimian said. “We really like the borrowers, but a project of this scope should be done in 18 months and [it’s taken] two and a half years to be 75 percent complete. We looked at that and saw that it might take another year [to complete], and we didn’t want to hold it that long. COVID-19 makes you look at your books through a different lens, so once COVID hit, we thought it was time to part ways.”

“We gave the borrowers notice in March and said, ‘Don’t assume we’re going to extend your loan,’” Rahimian added. “[Columbia is a] lender I know well, and they called me about a month and a half ago and asked me what I thought about it. It’s a great borrower and a great asset, but it’s been two and half years and we wanted to move on to the next deal.”

Liu is the president of San Francisco-based Transworld Construction, but the lender, Columbia, confirmed that this investment is not connected to Liu’s development firm. Transworld’s offices were located at the address prior to the previous structure’s demolition, as per the firm’s website and reported by the San Francisco Business Times, which first reported news of the mortgage.

The development at 1178 Folsom Street is nearly complete and Liu is planning to start pre-leasing within the next 30 to 60 days, Nelson told the Business Times.

“We are pleased to have a partner in Columbia Pacific Advisors, which understands our vision for providing a thoughtfully designed building that brings needed housing to SoMa,” Liu said in a prepared statement.

The property’s more than two-year development would see a five-story mixed-use micro-apartment, retail and office building designed by David Baker Architects rise at the site. According to information from Columbia, it’s in line to be completed by September. It will feature 42 micro residences that will range from 290 to 350 square feet as well as ground-floor retail space and second floor office space. Its location puts it just a short walk from both Uber and Twitter’s global headquarters.