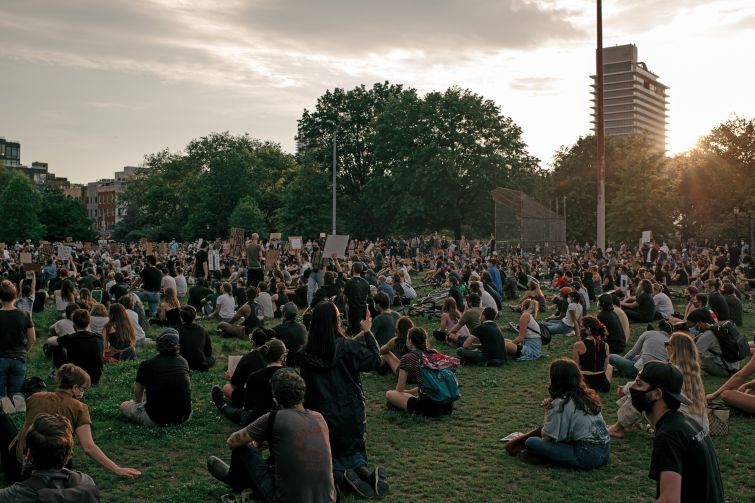 On Thursday evening, some 4,000 New Yorkers gathered in Williamsburg’s McCarren Park in memory of George Floyd. They sat silently, some kneeling, some holding signs with the names of the most recent victims of police violence, in the thick evening heat.

A deep silence lingered for thirty minutes over the green lawns.

And then the chanting began, a call and response that rippled through the crowd.

“Black lives matter!” a voice carried through a megaphone.

It was one of the thousands of marches, vigils, rallies and protests sparked by the killing of Floyd, a 46-year-old black man who died at the hands of a Minneapolis police officer on May 25. The white police officer filmed kneeling on Floyd’s neck for nearly nine minutes wasn’t charged until four days later. Three other officers, two who helped restrain Floyd and one who stood by, were charged nearly a week later.

Floyd’s death unleashed a wave of outrage and civil unrest that brought people out of their homes for the first time in weeks. Protests against police violence erupted in over 250 cities with nightly scenes of violent clashes between police and protesters, and a rash of looting in several major cities, including New York City where everything from the most luxe to the poorest corridors were hit.

The protests, a largely leaderless movement for police reform, have been met with increased policing at all levels of government. President Donald Trump tweeted out: “When the looting starts the shooting starts”; twenty states have deployed the National Guard; cities are implementing curfews; and hundreds of videos of police violence against peaceful protesters are circulating on social media.

On the flip side, the police have contended with attacks on officers, and taunts and provocations from protesters, who have shouted officers down with chants of “Fuck the police!” They’ve also had to quell the looting and violence that broke out.

In New York, what began as sporadic mayhem on the night of Saturday, May 29, with smashed windows and ransacked stores in pockets of the city, escalated to widespread looting and chaos across Soho and Greenwich on Sunday, May 30, and into Midtown and parts of the Bronx by the night of Monday, June 1. Bands of looters broke into Macy’s flagship in Herald Square, tore the boards off of Bergorf Goodman, and raided over a hundred stores in Soho alone, along Prince and Houston streets.

But New York is also a prime example of how leadership chose to respond to protests against police violence with increased police presence and a show of force. Police in full riot gear were deployed on the first night of peaceful protests, and Mayor Bill de Blasio responded to several nights of looting with the first curfew since World War II, added 4,000 additional cops to the street, and outlawed some critical transportation services such as Citibike and Lyft rides after 8 p.m, when the curfew begins.

Gov. Andrew Cuomo said even that wasn’t enough, calling on de Blasio to make use of the largest police force in the United States. “You have 38,000 NYPD people,” Cuomo said in a June 2 press briefing. “Use 38,000 people and protect property. Use the police.”

This sentiment seemed largely tone deaf to the demonstrators. “Pay attention to what’s missing,” said public advocate Jumaane Williams in a June 4 press conference. “There was no language that said we have to protect the lives of black folks in the city, that we have to figure out a solution to how to address the pain and anger of the protesters.”

It’s important to protect property, Williams continued, but there remains a question of emphasis. “Take the same energy that you used in discussing the protection of property, just keep it when discussing what you’re going to do right now – not tomorrow or the day after, right now – to address the pain and anguish of black New Yorkers.”

State Senator Zellnor Myrie, who was pepper sprayed by police during a protest on May 29, said that more police is not the solution. “After seeing days of our police improperly using force, attacking peaceful protesters and even black elected officials like me, the notion that the solution is to put more police on the ground and charge them with enforcing increasingly strict guidelines is misguided at best, and dangerous at worst,” Myrie said in a statement to Commercial Observer. “The solution to a popular, predominantly peaceful uprising against police brutality is not to send police; it is to respond to the demands of the public. Until we see meaningful steps toward real police accountability, we will continue to see unrest.”

On Thursday, when De Blasio appeared at a memorial for George Floyd at Cadman Plaza, his first appearance at a protest, he was immediately drowned out by the jeers of the crowd. “George Floyd cannot have been allowed to die in vain,” he began. The crowd booed, and began chanting instead. De Blasio spoke for 90 seconds, made a passing mention to change at the NYPD, and then handed the microphone back to Attorney General Leticia James.

The criticism of de Blasio has come from activists, politicians and members of his own administration, who feel that he has shown poor leadership on the issues of concern to the protesters and essentially ceded control of the city to the NYPD.

The curfew, which outlaws activities including peaceful protest after 8 p.m., gives police broad license to arrest any New York City resident after the cutoff, leading to further clashes between police and protesters who have chosen to flout the curfew. In addition, a New York State judge ruled on Friday that a legal protection known as habeas corpus is suspended, so police can keep detainees, whether detained for violating curfew or looting a store, for over 24 hours, because of the extraordinary times.

“Every passing day demonstrates how this curfew is totally unreasonable and harmful to everyone. It’s a craven response to people organizing and exercising their rights,” tweeted state Senator Julia Salazar.

In Los Angeles, the American Civil Liberties Union sued the city over its curfew, arguing that it circumvents the constitutional rights of free speech and freedom of movement. “These unconstitutional curfews have suppressed a huge amount of important political protest activity and disrupted the lives of over 10 million people,” Ahilan Arulanantham, ACLU senior counsel told NBC.

And while both Cuomo and de Blasio have made it clear that they distinguish between criminal looters and peaceful protesters, both have denied reports of police assaulting protesters with little provocation, including journalists, medics and lawyers, despite video evidence of police aggressively shoving people, striking them with batons, and penning in protesters so they can be arrested en masse.

“I don’t believe that’s what happened,” Cuomo said. “Police bludgeon peaceful protesters with batons for no reason? That’s not a fact. They don’t do that.”

On Thursday, video emerged of a 75-year-old, white-haired protestor approaching police officers in Buffalo, N.Y., to talk, and then being violently shoved to the ground. The man, Martin Gugino, was taped lying motionless with blood pouring out of his ear as officers streamed by, and was later taken to a local hospital where he was in serious but stable condition with a head injury, according to media reports. On Friday, two officers involved in the incident were suspended, and then all 57 of their colleagues on the Buffalo Police Department Emergency Response Team, resigned from the unit in protest, according to the Gothamist.

Shortly before 8 p.m. on Thursday night, the police penned in a group of around 100 peaceful protesters on a narrow residential block in Mott Haven in the Bronx, blocking both sides of the road, according to news reports and first-hand accounts on Twitter. “[The cops] are out here escalating the situation,” one trapped protester said in a live-streamed video. “They’re intentionally trying to create a circumstance where [people] are going to get upset and hostile.” Minutes after 8 p.m., both lines of cops advanced on the protesters, pushing and shoving the trapped crowd, and later proceeded to arrest dozens of them.

“The police showed a lot of restraint,” de Blasio said on the Brian Lehrer Show Friday when asked about the incident, continuing to defend the police. He later conceded that in the cases where there was overreach, police officers should be investigated.

One caller, an employee at the city’s Housing and Preservation Department, asked the mayor about the NYPD’s oversized budget, and pointed out that unrest in the city has broader roots. “People are in the streets because they don’t have affordable housing, they don’t have healthcare, they don’t have stable jobs,” he said. “I think there’s a reason people are upset right now.”