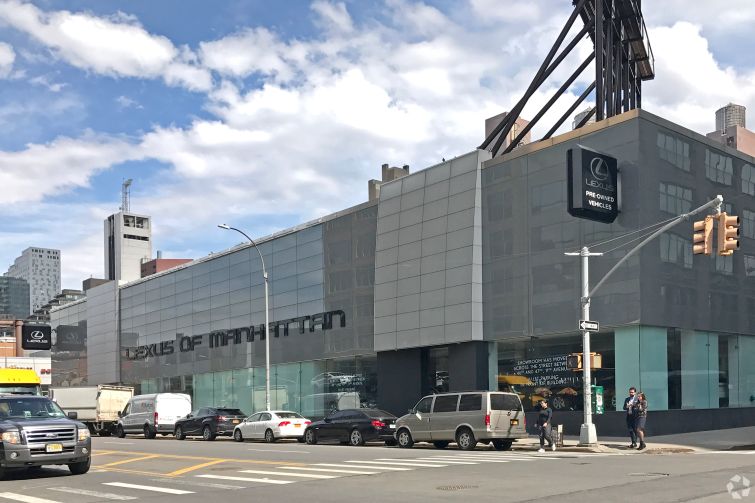 Developers behind the project to build a mixed-use condo building on the site of the former auto dealership at 646 11th Avenue sued their architect for botching the design. Photo: CoStar Group

The architect behind a mixed-use development in Hell’s Kitchen botched the plans, causing significant delays to the project and requiring the developers to hire a new firm, developers claim in a lawsuit.

The developers of 646 11th Avenue — CBSK Ironstate — filed a lawsuit against GreenbergFarrow claiming the architects breached its contract because of the poor design work for the 12-story retail and residential project. The snafus caused the developers to lose more than $8 million, according to the suit.

Representatives for the developer and GreenbergFarrow did not immediately respond to requests for comment. The developer’s lawyers, Loly Tor and Patrick Perrone of K&L Gates, also did not respond to a request for comment.

Plans for the site between West 47th and West 48th Streets call for a 12-story glass-and-concrete building to replace the one-story auto dealership with 222 units, 60 storage units, and 40,000 square feet of retail space, while keeping the Lexus showroom, according to New York Yimby.

New York Yimby reported that construction for the project crossed the halfway point in October 2019 and it was set to finish in 2021.

The suit is seeking “damages, costs and any such other relief” against GreenbergFarrow.

The 646 11th Avenue project isn’t the only building GreenbergFarrow worked on for some of the developers. SK Development and CB Developers also tapped the architect to design its 21-story Upper West Side apartment tower at 214 West 72nd Street, as Commercial Observer previously reported. That project is still under construction as of December 2019, according to CityRealty.