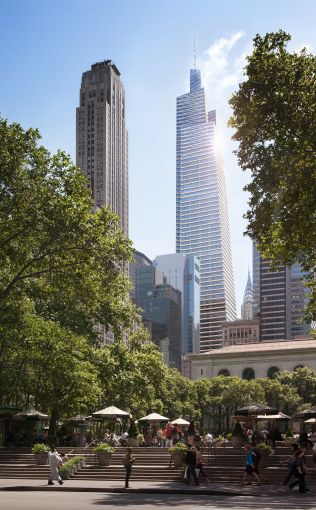 Six million square feet of expensive, newly-minted and as-yet unleased office space coming to market in the midst of one of New York City’s most catastrophic times might sound like too big a pill to swallow.

Leading brokers such as Savills’ David Goldstein had downbeat takes on the new developments’ prospects in a recent Commercial Observer article. The New York Times foresaw a “reckoning” for real estate if more companies decide to let their employees work from home.

But things have looked bleak before, and it’s time to give the city’s remarkable regenerative powers a fair shot.

On paper, the future of New York City office leasing, especially for new development, might appear dismal. Of some 12.8 million square feet of new product now in construction and due to open by 2023, only 53 percent is pre-leased, according to CBRE.

The statewide “pause” has halted work on nearly-finished towers, adding another layer of uncertainty for all parties. Tenants are retrenching. Morgan Stanley CEO James Gorman said that working remotely has worked so well that his firm will shrink its footprint. Twitter announced it would let all its employees work from home permanently. Mark Zuckerberg said he aims to have 50 percent of Facebook employees work from home within ten years.

In such a fear-ridden climate, when the coronavirus has only been contained by extreme social distancing and no vaccine has yet been developed, what tenant in its right mind is going to sign large leases in new buildings that command net effective rents of up to $200 per square foot?

Although the towers have already signed marquee name occupiers such as Warner Media, BlackRock, Carlyle Group and law firm Cravath, Swaine & Moore, what will happen to unleased floors at One Vanderbilt, 50 Hudson Yards and 66 Hudson Boulevard, aka The Spiral?

Could failure to find tenants sink their developers?

But there’s a big difference between “on paper” and in bricks and mortar reality. There’s likely going to be a big difference in the market between today and two years, or even one year, and perhaps even six months from now. We can’t know how different, but history lends a clue.

Usually baseless fears of a “glut” and “shadow space” – i.e., occupied floors that are quietly up for sublease – are a forever part of New York real estate chatter. Even when they occur, as in the late 1980s due to undisciplined over-construction, they don’t last long.

Nor do physical catastrophes produce the dystopian “things will never be the same” outcomes. It was an article of faith for some that Manhattan, and downtown especially, wouldn’t ever be the same after 9/11. Who would ever again want to work there, close to an open mass grave and amidst possibly poisonous air? But downtown became the city’s lowest-vacancy office district a few years later.

Ah, skeptics say – but 9/11 was a one-time disaster, where the virus might be with us for years.

Counterpoint: New York City lived in dread of another terrorist attack for long after. We feared another airborne assault at least as much as we now fear the airborne virus.

In that light, those 6 million new square feet still up for grabs deserve a closer look. For one thing, CBRE tristate CEO Mary Ann Tighe pointed out that only 4.3 million square feet of availability exists in the jumbo skyscrapers that will be most closely watched as market bellwethers. The rest are in boutique projects with as few as 150,000 square feet, such as Moinian Group’s 220 Eleventh Avenue due in 2022. Such properties will likely ask for lower rents and are less challenging to lease up.

Also in the largest new projects’ favor is that companies needing the most state-of-the-art workspaces won’t have much choice elsewhere. Manhattan is almost out of buildable footprints on commercially-zoned land big enough to allow super-size new developments to go up – which is one reason why, for example, ABC/Disney is building a new headquarters in the once-unappealing Hudson Square.

Even the 4.3 million availability figure “needs an asterisk,” said JLL tristate chairman Peter Riguardi, because some tenants that signed for the supertalls have expansion options beyond their original commitments.

Riguardi doesn’t downplay the gravity of what’s happened. “We’ve been punched real hard in the gut,” he said. “We’ll have to adapt.”

Ever-optimistic Mitchell L. Moss, Henry Hart Rice Professor of Urban Policy and Planning at NYU, acknowledged, “Everything will slow down because of the uncertainty.”

Even so, brand-new towers that incorporate today’s in-demand bells-and-whistles – such as column-free floor plates, 14-plus-foot slab to slab floor heights, and environmentally attuned infrastructure – have a huge advantage over the city’s older office stock. Buildings a mere 25 years old are generations behind the new class.

Moss noted, “Buildings like One Vanderbilt are sufficiently advanced that they can be easily modified to protect employees before they open.”

Tighe said, “The Covid crisis is going to cause anybody who’s looking at their office needs to factor in elements ideally suited to new buildings but are challenges for older ones.”

The sophisticated air-flow systems shared by the new skyscrapers can be made virus-resilient much more easier than older ones can. And, “it’s easier to create touchless technology in new buildings,” Tighe said. “UV lights can kill off germs in buildings during the day. The entire process of access will be touchless,” thanks to iPhone codes that can let employees in without having to pass through security gates.

As for the supposed stay-at-home revolution: although it might reduce some demand for office space, Moss points out that “offices have the great advantage of face-to-face contact. It isn’t the same when everyone is sitting alone. There are candor and nuance in an office that you don’t get on a computer screen at home.”

The remote-working success that companies such as Morgan Stanley have had might be relative and short-lived. It worked more smoothly than expected, but it’s only been for two months. Longer term is another story. Many executives suffer Zoom fatigue and are dying to go back to their desks. Lost in the news of Zuckerberg’s work-from home announcement was that internal Facebook surveys showed that more than half of his employees said they “really want to get back to the office as soon as possible,” he said.

If anything, reduced demand for office space will hurt Class-B buildings and older Class-A buildings more than the new, ground-up crop. That trend has been ongoing for years as tens of millions of obsolescent commercial properties were converted to apartments.

It’s part of the city’s ever-evolving dynamic, which not even the most terrible plague in 100 years is likely to change.