The owners of the twin skyscrapers called City National Plaza got $550 million in CMBS debt to refinance the asset. 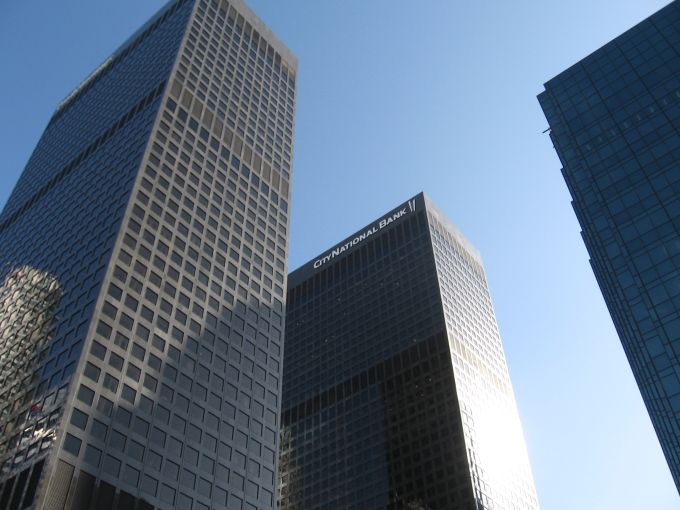 One theme of the COVID-19 era in commercial real estate is that robust sponsors with strong assets will still get the financing they need, despite freezes in certain financial subsectors.

The owners of the twin skyscrapers that make up the 2.5-million-square-foot office complex City National Plaza in Los Angeles’ Financial District have nabbed $550 million in commercial mortgage-backed securities (CMBS) debt to refinance the property, according to ratings agency analysis of the transaction.

Morgan Stanley and Goldman Sachs originated the mortgage, which was provided to a joint venture between the California Public Employees’ Retirement System (CalPERS) and CommonWealth Pacific Capital (CWP Capital), which has managed the property since 2013 when the duo bought the asset, according to Fitch Ratings, which analyzed the deal.

Eastdil Secured‘s Philip McKnight, along with Mark Williams and Greg Stampley, who work out of the firm’s Newport Beach, Calif., office, represented CWP Capital in the transaction, according to McKnight.

The 10-year, interest-only loan is non-recourse and has a 2.44 percent fixed rate — which eliminates LIBOR exposure over the life of the loan. The $550 million mortgage includes a $330 million senior note that will be securitized in the Morgan Stanley-led MSC 2020-CNP single-asset single-borrower (SASB) transaction, while the remaining $220 million balance held outside of this trust will be reserved for one or more future securitizations, as per information from Fitch. Along with these proceeds, the sponsors injected $3.6 million in equity to contribute to the refinance, fund upfront reserves and pay for closing costs, according to Fitch. The underlying mortgage closed on March 25, and the SASB securitization is set to close on May 13, according to a representative for Morgan Stanley who confirmed the dates; it was originally scheduled for May 19, according to Fitch.

City National Plaza includes two 52-story skyscrapers and spans an entire city block at 515 South Flower Street in Downtown L.A. It has 3,273 parking spaces — an on-site parking garage and a separate 11-story garage adjacent to the site that’s connected to one of the towers via a skybridge — and it sports an underground retail “concourse,” with around 125,000 square feet of space serving restaurant and retail tenants, as well as a 24-hour fitness center, according to Fitch.

CalPERS and CWP Capital bought the property in the fall of 2013 for $858 million, or around $330 per square foot, from the California State Teachers’ Retirement System (CalSTRS). Prior to its sale, CalSTRS had acquired full ownership of the asset, buying out partner Thomas Properties Group in a trade that gave Thomas a greater stake in five other office buildings throughout Texas and northern Virginia that the pair co-owned, according to a 2013 report by CRE Direct.

The joint venture has injected about $193 million into City National Plaza since their acquisition seven years ago, including $66 million for upgrades to the buildings and the on-site amenities as well as $127 million in capital for tenant improvements. Built in 1972,  the property was last renovated in 2018, according to Fitch. Overall, the asset is 81.4 percent leased, serving a mix of financial services, legal and “creative” office tenants.

As of last month, City National Plaza’s office spaces are still open, although most of those tenants are currently working remotely due to the effects of COVID-19, as per Fitch’s analysis. And while every retail tenant has closed, only two — making up just 0.3 percent of in-place base rent — have reached out to request rent relief.

The sponsors were able to cover their April debt service, and they haven’t requested a forbearance or any loan modifications, according to Fitch, which highlighted the creditworthiness of CalPERS, the largest public pension fund in the country with about $369 billion in assets under management. CWP Capital is a real estate investor, developer and property manager who, since 1998, has been partnered with CalPERS to acquire offices and mixed-use assets across the country; they’ve worked on over $13 billion in real estate transactions together since that time, according to Fitch.

This loan includes an upfront debt service reserve, totaling just over $13.6 million, that would cover 12 months of debt payments as well as a cash flow sweep that triggers if the loan’s debt yield falls below 6.5 percent for two consecutive quarters, as per Fitch’s analysis.

Some office tenants at the site, like global law firm Paul Hastings, have requested rent relief, while another nine tenants making up just under 14 percent of in-place base rent have “recently began discussions with the sponsor,” according to Fitch. Other office tenants at the property include global advisory firm JLL, UBS Financial Services and law firms such as Kirkland & Ellis, Norton Rose Fulbright, Foley & Lardner, White & Case, Crowell & Moring and Katten Muchin Rosenman.

A dozen tenants comprising over 485,000 square feet of space have the option to terminate their existing leases either two, three, or four years prior to their respective expiration dates as long as they provide between 12 and 18 months notice and pay a termination fee, according to Fitch. Several of the building’s retail tenants are there on a month-to-month basis and the property manager isn’t expecting them to be at the property for a long period of time, as per Fitch’s analysis; the goal is to eventually lease up the space to a stronger base of retail and restaurant tenants that will complement the office tenants that currently occupy the asset.

Despite the pandemic, the vacant space is being marketed by “onsite brokers that walk the buildings and provide virtual tours to prospective tenants,” Fitch wrote, adding that the owners have said that there was around 350,000 square feet of “prospective leasing activity in the pipeline” at the time the COVID-19 outbreak set in; while most of those discussions were paused, the sponsors reported to Fitch that negotiations with these tenants have recently reignited. Fitch wrote that some of the building’s smaller tenants have continued building out their existing spaces due to Los Angeles’ lenient restrictions on construction activity during the pandemic. The sponsors also reported that many of their tenants have discussed picking up more temporary space to give employees who are still in office and “adhering” to social distancing measures more personal space.

L.A.’s downtown office submarket — the city’s largest, holding just under 19 percent of total office inventory — registered an average vacancy rate of 14.1 percent and an average rent of $43.50 per square foot in the fourth quarter of last year, Fitch wrote, citing data from research firm Reis. With that, City National Plaza’s current vacancy rate comes in just above the submarket average while its average gross rent rate per square foot of $47.07 is in line with existing Class A and Class B product comps in the area.

Between 2015 and 2019, the downtown L.A. submarket had posted positive net absorption, with average new completions amounting to around 558,000 square feet per year and absorption registering at 676,600 square feet, Fitch wrote — although Reis is expecting absorption to turn south over the next five years, resulting in a small increase in average vacancy by 2024, to 14.9 percent from 14.1 percent, the 2019 fourth-quarter figure.