The two towers are leased to Uber and are part of a larger mixed-use site around the $1.4 billion Chase Center, the new arena of the NBA’s Golden State Warriors 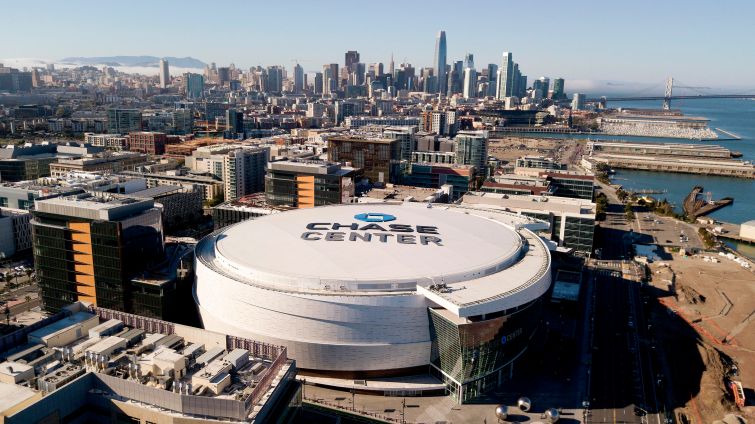 The Chase Center site, with the two towers in this deal bordering it to the west and north. Photo" Josh Edelson/ AFP via Getty Images

A sponsorship group led by Uber and the NBA’s Golden State Warriors has secured $600 million in commercial mortgage-backed securities (CMBS) debt that was originated by J.P. Morgan Chase in order to refinance the new Chase Center Towers in San Francisco’s Mission Bay neighborhood, according to ratings agency analysis of the transaction.

The five-year, fixed-rate and interest-only loan will refinance around $314.6 million of existing debt, pay upfront reserves and closing costs and return roughly $202.3 million in equity to the sponsors, according to Fitch Ratings, which analyzed the transaction.

About $101.3 million of the loan has been included in the Deutsche Bank-led $639 million BMARK 2020-IG2 CMBS transaction, the subject of this Fitch analysis, which is expected to close on May 22. The $101.3 million in this conduit deal consists of two cross-collateralized and cross-defaulted pieces — $54.6 million on Chase Center Tower I and $46.6 million on Chase Center Tower II. The remaining loan notes will be contributed to future CMBS transactions, according to Fitch.

The Golden State Warriors — under the ownership entity GSW Sports, led by the team’s majority owner, chairman and CEO Joe Lacob — and Uber Technologies each have 45 percent interests in the joint venture, while Pasadena, Calif.-based real estate investment trust Alexandria Real Estate Equities owns a tenth of the partnership. The group was formed in March 2018.

The Chase Center Towers act as an extension of the Warrior’s brand new $1.4 billion Mission Bay arena, Chase Center. GSW finished the arena last year, moving away from its original East Bay home in Oakland at the Oracle Arena, which was opened in 1966. As for its pedigree as a sponsor to this securitized mortgage, the team is the third most valuable NBA team today, with a franchise value of $4.3 billion as of February 2020, according to a Forbes ranking of NBA team valuations.

With the build out of the arena, the partnership is erecting the two office towers as well as retail spaces and a hotel, as per Fitch analysis, in a bid to energize the area in order to further monetize the stadium. The goal of Chase Center and the surrounding development was to essentially create a commercial center and entertainment district that would spark growth and more business activity in the Mission Bay area, with tech giant Uber acting as a mega-tenant on the front lines leading the way.

The two towers — called Mission Bay 3 and 4 — will be fully occupied to Uber on 20-year leases and are part of a larger, four-building site being developed by the ride-hailing company that will be its new San Francisco headquarters; the two other, separate office assets not included as collateral in this loan pool are located on the northern edge of the property. The two towers in this transaction were being built in conjunction with Chase Center. GSW is co-investing in the office development surrounding the new stadium, according to Fitch.

Uber’s new four-building office campus will feature more than 1.0 million square feet and will service over 7,000 employees, as per Fitch’s analysis.

Earlier this month, San Francisco allowed construction activities to resume after a COVID-19-induced stay-at-home order in March deemed office construction non-essential. That work stoppage has delayed Uber’s move in date — to sometime this summer — but has not impacted its future rent obligations, according to Fitch; rent payments began in September for “Tower II” and in October 2019 for “Tower I.” Fitch highlighted that the deal includes a cash flow sweep that triggers if Uber “defaults under its lease, files for bankruptcy or is insolvent, has its credit rating fall below ‘CCC’ or equivalent, or if its average market capitalization falls below $20 billion for any two consecutive calendar quarters.”

The towers in this deal — located at 1655 and 1725 Third Street — span over 586,000 square feet and were last appraised in December at $863.5 million, as per Fitch’s analysis. The assets sport ground floor retail space called “Thrive City” and a parking garage with 593 parking spaces, 145 of which are expressly leased to Uber. Each building has a sizable outdoor deck on the sixth floor that overlooks the site’s central plaza.

The development makes up what Fitch called a “master condominium association,” which includes Chase Center, the two office properties, the parking garage, and finally, a small broadcast building.

According to Fitch, because the Mission Bay area lacks entertainment and food and beverage offerings, the asset’s amenities will be a much-needed addition once they open and post-pandemic activity gradually resumes. The “Thrive City” retail space — which was not included as collateral in this CMBS deal — was still under construction when Fitch inspected the assets last October; only a Chase Bank branch had opened.

As for the Chase Center arena, it opened last September in time for the NBA regular season and ready to ride the wave of robust activity drawn from the basketball campaign; the Golden State Warriors played its first regular season game there on October 24.

Just several months later on March 12, the NBA announced that it was halting league play “until further notice,” due to COVID-19 after a player on the Utah Jazz tested positive for the virus.

Since then, the arena has remained vacant, with around 1,500 Chase Center workers having lost their jobs; the Warriors have contributed $1 million in funds from which its workers can draw, according to a late-March report from the Bay Area’s KQED radio.

While no date for the resumption of league play has been established, NBA Commissioner Adam Silver has called the pandemic and potential restart “the single greatest challenge” the league has ever faced, according to a recent report  by The New York Times. Silver spoke to the NBA Players Association (NBPA) in a conference call last Friday night, a recording of which was obtained and reviewed by The Times. According to The Times’ reporting, Silver expressed to the NBPA his intentions to restart the season, adding that “No decision we make will be risk-free…We’re going to be living with this virus for the foreseeable future.”

There have been obvious concerns across the sporting world domestically and internationally about the implications play returning, with ideas such as “ghost games” — games held without any fans in attendance — being implemented, like in Germany’s Bundesliga soccer league, which resumed last weekend in empty stadiums.

Nevertheless, the outlook is grim for sports stadium real estate, which relies mostly on ticket revenue and sales to drive cash flows. As for the NBA, game-night income driven by fans accounts for nearly 40 percent of the league’s annual revenue, Silver told the NBPA on Friday’s conference call reported by The Times.