How the Pandemic Is Driving Labor Activism Among Essential Workers

Workers at Amazon, Walmart and Target have been staging an unprecedented number of walkouts and protests to highlight work conditions during the pandemic. 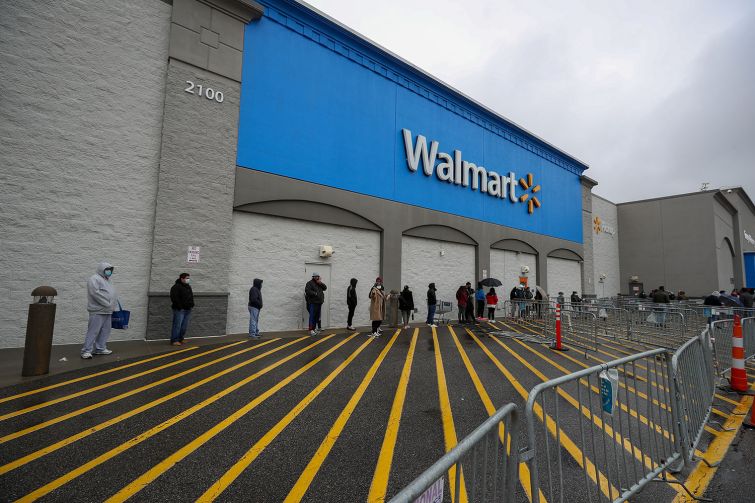 Workers at Walmart and several other major retailers have helped lead the charge with labor actions against their employers to protest working conditions and pay during the pandemic. Photo: Tayfun Coskun/Anadolu Agency via Getty Images

While most white-collar workers are riding out the coronavirus pandemic at home, many low-wage essential workers — in retail stores, e-commerce warehouses, apartment buildings and delivery trucks — have had no choice but to go to work and risk exposing themselves and their families to the virus. Many of these workers, feeling like their employers have basically left them to fend for themselves, have staged a wave of walkouts, strikes and protests across the country.

But even amid an arguably historic moment for labor action and collective organizing, it’s not clear whether workers will walk out of the pandemic and the ensuing recession with stronger rights or better pay at state or federal levels.

Amazon, for instance, has come under fire for its labor and paid sick leave practices during the outbreak, as it receives an unprecedented volume of orders from Americans forced to quarantine inside their homes. In March, the e-commerce giant rolled out an unlimited unpaid time off policy for workers who were concerned about contracting coronavirus. But the policy expired on May 1, leaving thousands of the company’s distribution center workers worrying whether future absences would be held against them without a positive COVID test.

Amazon has implemented a number of other measures for employees during the pandemic, including a $2-per-hour raise, paid time off for seasonal and part-time workers, double overtime, and adding extra space between workstations and break tables to help workers social distance. But the social distancing measures have not been well-enforced, many warehouse employees claim, and that has formed part of the basis for their protests.

Meanwhile, more than 300 Amazon warehouse workers have tested positive for the coronavirus, according to a crowd-sourced case tracker run by labor nonprofit United for Respect. At the company’s Staten Island fulfillment center, one worker died of COVID-19 this week, tech site The Verge reported. At least 29 workers at the distribution center, known as JFK8, have fallen ill, according to internal alerts reviewed by The Verge.

In late March, JFK8 became the first of several Amazon facilities where workers have staged walkouts and protests. Amazon later fired the organizer of that first March 30 walkout, an assistant manager named Christian Smalls who repeatedly confronted management at the Staten Island warehouse about the potential spread of the virus. The company has argued it fired Smalls because he violated an order to quarantine at home after he was exposed to a coworker who tested positive for COVID-19.

In response, New York Attorney General Letitia James said it was “disgraceful that Amazon would terminate an employee who bravely stood up to protect himself and his colleagues. In New York, the right to organize is codified into law, and any retaliatory action by management related thereto is strictly prohibited.” James called for the National Labor Relations Board to investigate his firing, and Smalls said he planned to file his own complaint with the NLRB.

The federal labor regulator launched an inquiry into Amazon last month after workers in the company’s Chicago warehouse filed charges alleging that it retaliated against them for protesting work conditions during the pandemic, BuzzFeed News reported. The move came after Amazon last month fired two workers in Seattle and a third in Minnesota who were demanding better workplace protections for warehouse workers.

“Nothing is more important than the safety of our teams,” Amazon spokeswoman Rachael Lighty said in a statement. “Since the early days of this situation, we have worked closely with health authorities to respond proactively, ensuring we can continue to serve communities while taking care of our associates and teams. We expect to spend more than $800 million in the first half of the year on COVID-19 safety measures. Our focus remains on protecting associates in our operations network with extensive measures including distributing face masks, disinfectant wipes, hand sanitizer, implementing temperature checks, operating with strict social distancing protocols, and recognizing their contributions with additional pay and leading benefits.”

Even New York City real estate has not been immune to worker unrest during the pandemic, which has infected 174,709 people and killed 14,162 in the five boroughs. Roughly a dozen building service workers walked off the job on April 16 at two Upper West Side luxury buildings, the Chamberlain at 269 West 87th Street and 432 West 52nd Street. The workers staged the 24-hour strike in an effort to secure higher pay, adequate personal protective equipment and the ability to take sick days when necessary. The employees, who work for janitorial firm Planned Companies, claim the company has prevented them from joining a union — 32BJ SEIU — and has made it difficult for them to take sick days to care of themselves or their families.

“Right now, I feel like Planned has gotten away with a lot, and at a time of pandemic it needs to stop,” said Tunde Bello, a 32-year-old who’s been a porter at the Chamberlain for nine years, in a statement. “I am worried every day as I commute from Coney Island on a crowded train, I feel every time I go out, I risk getting sick and bringing it home to my family. We have had so few gloves that I’ve had to put Purell inside and out the pairs I have.”

32BJ, which represents 85,000 property service workers in New York City, has been pushing for the next federal stimulus bill to include special protections for essential workers, including hazard pay, requiring employers to provide PPE and payroll protections for contracted workers in the event of layoffs. But worker protections have not been high on the list of priorities for federal legislators, which have largely focused on corporate bailouts, a small business grant program, direct stimulus payments to citizens, and a temporary expansion of the federal unemployment program.

Walmart has also emerged as a serial offender on the workers’ rights front during the pandemic. The company is both America’s largest retailer and its largest employer, with 1.5 million employees and 4,800 stores nationwide. As of April 18, the megachain had “fewer than 2,000” workers test positive for the virus and 150,000 employees were on leave, according to the Wall Street Journal.

Walmart executives pledged to implement overnight deep cleanings at stores, provide personal protective equipment to employees and enforce social distancing at entrances. But workers and labor organizers claim the company has failed to fulfill those promises at many stores.

Ruby Ann Woolwine, 57, has worked at a Walmart location in Dearborn, Michigan for more than four years. She recently switched her normal 4 a.m. to 1 p.m. shift to an overnight one, hoping to interact with fewer customers, but she still fears bringing the virus home to her family. She lives with her son, daughter-in-law and their five children, and two people in her household are immunocompromised. Working the night shift, she hasn’t seen anyone come in to clean the store or spray down the carts. Employees at her branch also weren’t given masks until last week, and they still haven’t been given gloves. And no one has been limiting the number of people who can enter the store to ensure proper social distancing, she said.

The Arkansas-based chain also claimed it had started giving workers cash bonuses. Woolwine said there had been a one-time bonus of $300 for full time employees and $150 for part-timers. She earns $13 per hour, after a recent $1.50-per-hour pay bump for switching to the night shift. Walmart workers in Canada got an extra $2 per hour last month, but employees in the U.S. have not gotten any pay increases during the pandemic.

“We need hazard pay because our lives are worth more,” Woolwine said. “And time off of work if you’re sick without the fear of losing your job.”

What upset her the most was that one of the employees at her store had tested positive for coronavirus, and she didn’t know about it until weeks later.

“We had a positive case and I didn’t know about it until a month after the fact,” she said. “Nobody knew about it for over a month. I found out through a coworker that was working next to him at the time.”

Woolwine was one of roughly 500 Walmart workers who decided to call out from work last Wednesday, as part of a protest organized by labor nonprofit United for Respect. The organization, which recently launched a crowd-sourced tracker of COVID cases at Walmart facilities, claims store managers are often choosing not to disclose positive cases to other employees. Meanwhile, the company argues that it has taken proactive steps to prevent viral spread, including taking workers’ temperatures, asking health questions at the beginning of every shift and installing sneeze guards at registers.

A Walmart spokesman disputed Woolwine’s claims. “Maintaining customer and associate safety remains our top priority,” said Walmart spokesman Casey Staheli in a statement. “We are also encouraging customers to be especially mindful of one another during this unprecedented time and adhere to recommendations that we all use face coverings while in public spaces. We’ve posted signs at store entrances reminding customers of the importance of wearing masks. We also enacted cleaning and sanitizing protocols with guidance from the CDC and Walmart’s Chief Medical Officer early on and we will continue taking any and all measures necessary to ensure the well-being of our associates and customers.”

At this point, it’s hard to predict whether workers like Woolwine and Smalls will be able to shift the balance of power on a federal level and shore up rights for low-wage workers in the long run. As America reaches unemployment levels last seen during the Great Depression, more people are facing economic hardship than they have in decades. That kind of struggle can turn apolitical people into voters and activists, said Erik Loomis, a labor historian at the University of Rhode Island.

“Now all of a sudden people who never really considered themselves political can’t pay their rent,” he explained. “Probably a relatively significant percentage are going to say, ‘I’m not going to pay.’” He added that recent polls of people who say they’re going to vote in the fall elections “have skyrocketed.”

Rent strikes became widespread in many cities during the Depression, he noted, and a series of labor strikes in the 1910s and 1920s helped strengthen support for unions. Then President Franklin Delano Roosevelt laid the foundation for the modern labor movement when he signed the National Labor Recovery Act in 1933, which gave workers the right to unionize. The following year gave rise to four major strikes, including a 400,000-strong textile worker strike that became one of the country’s largest labor actions.

While it is tempting to assume that the U.S. could follow a similar path in the wake of the pandemic, Loomis pointed out that the country experienced a similar depression in 1893, which is widely considered the second-worst in American history. “The legal and social structure of the United States is so overwhelmingly opposed to worker rights at that time” that no clear worker reforms emerged from the panic of 1893, which coincided with the rise of populism, he explained.

Loomis predicted that coronavirus will lead to “a significant wave of workplace activism with new, more concrete demands. The ultimate result of that, I don’t know. It could be 1935 where you have a new wave of legislation, or 1894 where you don’t.”