From Jean-Georges to Eric Ripert, Fine Dining Operators Are Hustling 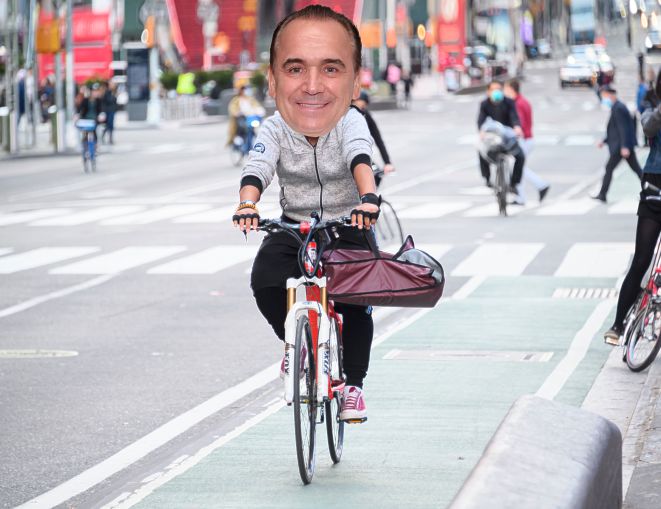 Hello, my name is Jean-Georges, I'll be your deliverer. Photo by Noam Galai/Getty Images; collage by Jeff Cuyubamba/for Commercial Observer

Is fancy takeout the way out of the darkness for the city’s locked-up restaurants?

As owners pray for an end to the coronavirus lockdown, eateries humble and haut — from Spanish tapas chain Boqueria to Jean-Georges Vongerichten’s fine-dining palaces — are taking the plunge on refined takeout-and-delivery right now. They want it to be up and running by the time full reopening can occur and help make up for revenue lost to seat restrictions.

Superchefs Tom Colicchio and David Chang are spreading doom-and-gloom. So is Danny Meyer, who told Bloomberg his full-service restaurants would remain closed “for a very long time — probably not until there’s a vaccine.”

But many more are rolling up their sleeves even though the reopening date’s “a moving target” and possibly months off, said Merchant Hospitality Group owner Abraham Merchant.

“We suffered through three other tragedies before,” said Merchant, whose places including Treadwell, Philippe Chow and Industry Kitchen have 3,000 seats in total. “This one is bigger than all three combined, of course. But each time, we came back better and more resilient than before.”

Michael Lomonaco, chef and managing partner of Porter House, which does $12 million in annual volume, and also of Hudson Yards Grill, said, “They say New York will never be the same, but New York has always never been the same.”

One unprecedented challenge is providing enhanced health protection for staff and customers. That will largely depend on government rules. But owners must figure out for themselves how to thrive with fewer seats in a business with notoriously low profit margins of 10 percent or less.

“How can we make money? We haven’t figured that out yet,” Lomonaco said. “We have to get open first.” Despite buzz over $100 hamburgers in the future, one thing he won’t do is raise prices. “Honestly, we have not considered that,” he said.

Some owners hopefully foresee outdoor seating in June or July and a gradual return to something like normalcy in the fall.

Most are already plotting the nuts and bolts to reopen. Le Bernardin chef and co-owner Eric Ripert said that converting his upstairs rooms, normally used for private events, into regular dining spaces would allow for the same number of seats as usual, but spaced in such a way as to meet six-feet-apart rules.

But he said his three-Michelin-star French seafood palace wouldn’t reopen though until September at the earliest. “Even if we can reopen sooner, our clientele won’t be here,” Ripert said.

Fireman Hospitality Group owner Shelly Fireman is working out how to reopen his places with a total of 2,500 seats. His chief strategy officer Ben Grossman said, “Even when the governor lifts the shutdown, we are going to proceed very carefully.”

Café Fiorello, on Broadway opposite Lincoln Center, would come first with enhanced takeout and delivery in June. Its 100-seat outdoor patio could follow once sit-down service returns.

Fireman’s Bond 45 off Times Square and Trattoria dell’ Arte near Carnegie Hall wouldn’t reopen before Broadway and other live entertainment venues nearby — which under Gov. Andrew Cuomo’s schedule wouldn’t turn their lights on until later. Mammoth Bond 45, where the rent is “in the league of $1 million a year,” Fireman has said in the past, depends on customers from three Broadway shows on the block, including “Hamilton.”

After a faltering start in March, takeout and delivery have caught fire. Unlike earlier efforts to simply help feed the neighborhood, the new options are aimed at generating more revenue and loyalty when the restaurants reopen fully.

Pasta, Pecora Bianca’s specialty, “lends itself to meal kits,” he said. His takeout model tries to “maintain some level of experiential dining but at home. If you order a Negroni kit, you get a Pecora Bianca coaster,” he said.

Upper East Side French haunts Orsay and La Goulue are getting into the off-site game too. Partner Bernard Collin says, “We’re starting the machine. We’ll need the revenue even if it’s just a fraction to close the gap.

“You don’t want people to forget you’re still there,” he said. Rather than use fee-hogging delivery services like GrubHub or Caviar, “We’ll have our own waiters to deliver,” he said — another way to bond with customers.

Mayor Bill de Blasio has said the city would “consider” letting restaurants make greater use of outdoor space. “Everybody talks about it. Everybody wants it,” said lawyer David Helbraun, who represents hundreds of local restaurants.

Very few places are paying rent right now. “No one can in this environment,” said Barak, whose Pecora Bianca’s locations in East Midtown and NoMad were paying modestly above $150 per square foot.

“Simply deferring rent isn’t really a solution,” he said. “You still have to pay. It’s a difference between liquidity and solvency. We can get through the liquidity issue until we reopen, but we can’t get through the solvency issue when we reopen without adjustments.”

Despite anecdotal accounts of landlords refusing to give up a dime because their lenders won’t budge either, Barak said, “A lot of lenders are helping. We’re the only tenant they have and it’s in their interest for us to survive.”

Fireman’s landlords include mighty Vornado, Milstein and the Feil Organization. “We are not making rent payments. Our landlords are working with us,” Fireman said. “Nobody’s trying to evict us.”

“Himmel is my partner but he’s not the landlord, which is [Related Urban],” Lomonaco said. “He’s working with them on this.” Related declined to comment.

Helbraun said that for all the supposed good will, most landlords “are still wait-and-see.”

But Fireman was all cheer. “We all love our landlords and we all want to eat,” he said.

Steve Cuozzo writes and edits about food and real estate for the New York Post.