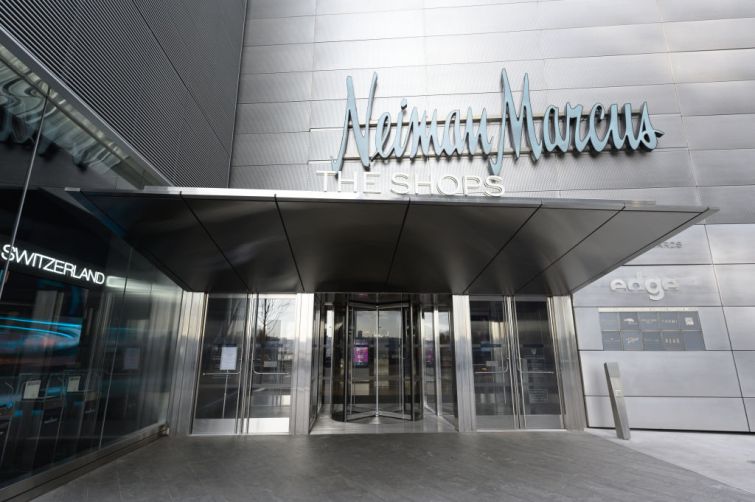 Luxury retailer Neiman Marcus, hindered with billions of debt, could file for bankruptcy as soon as this week because of the economic impact caused by the coronavirus pandemic, Reuters reported.

The Dallas-based chain owned by Ares Management and the Canada Pension Plan Investment Board (CPPIB) — which also operates Bergdorf Goodman and Neiman Marcus Last Call stores — has about $4.8 billion in debt but skipped out of millions of dollars in payments last week as COVID-19 forced it to shutter its roughly 70 stores for all of its brands, according to Reuters. The company has also furloughed most of its nearly 14,000 employees.

Standard & Poor analysts lowered Neiman Marcus’ credit rating into the “junk” category and wrote in a note that it thinks “the company’s prospects for a turnaround are increasingly low,” according to Reuters.

“It’s a shame to see a company like Neiman Marcus go out because it’s such an iconic brand,” said James Famularo, the president of Meridian Retail Leasing. “I have a feeling I’m going to be saying that a lot more.”

The brand was already marching towards a bankruptcy filing as it struggled to compete with the rise of online shopping but the coronavirus epidemic’s impact to the economy — forcing retailers to close its doors and putting millions of Americans out of work — “accelerated it at warp speed,” according to retail consultant Kate Newlin.

“This was going to be a slow erosion,” Newlin said. “There’s no way to make the numbers work without a great deal of outside capital and a sucker every five years whose willing to say, ‘Oh, wait, we can run this thing’… Now there’s no place to hide.”

Part of the issue for Neiman Marcus is it struggled to adapt to shopper’s changing habits beforehand, Newlin said. Now, the thought of stepping into a department store is going to be far from many people’s minds whenever they would be allowed to re-open.

“[Neiman’s is] not a great shopping experience,” said Newlin, citing unhelpful staff and constantly being surrounded by security personnel as the reasons. “Then you couple that with what’s happening now which is we can’t go and when we can we would have learned new behaviors. We would have learned to shop online, and once you go in that direction you’re unlikely to go back now and say, ‘Gee, what I really what to do is go into a dressing room and try things on.’ Those are words that are not going to be spoken for a very long time.”

Adweek reported that roughly a third of Neiman Marcus’ $4.7 billion revenue from last year was from online sales, but Newlin said that won’t help since many customers cannot or do not want to buy the type of products Neiman sells during this time.

“What you’re looking for is not the right dress or the new suit to go for a special event,” she said. “The demand has shifted on them rapidly.”

Neiman Marcus — which was founded in Dallas in 1907 by Herbet Marcus — was bought out by private equity firm Ares and CPPIB for about $6 billion in 2013, according to Reuters. The owners have been trying to turn the company around and announced in March it planned to close most of its discount Last Call stores while trying to sell two of its Texas distribution centers, Adweek reported.

The department store made a splash in the New York market when it leased 188,000 square feet at Hudson Yards’ retail complex, the first tenant to sign on to the 7-floor property, as Commercial Observer previously reported. Newlin said losing Neiman would be a “massive blow” for Related Companies’ project.

Famularo said he expects Neiman to permanently close about 25 percent of its lowest-performing stores during the bankruptcy process, but didn’t think the Hudson Yards’ location would be on the chopping block.

Aside from leaving a 188,000-square-foot gaping hole in Related’s project, the developer likely invested significantly in Neiman’s store and the deal could include profit-sharing making it even more a reason for Related to have Neiman stay.

“I want to take a guess Related and their management company works with [Neiman] to keep them there,” Famularo said. “It’s just too new of a project. Traditionally on these deals, the developer or the landlord pays for a lot of the build-out. They’re already monetarily invested in that brand and that location.”

Before the coronavirus, department stores like Neiman were struggling to stay afloat with many filing for bankruptcy and shuttering. In the past two years, Sears filed for bankruptcy with plans to close more than 500 stores nationwide, Henri Bendel closed its iconic New York City flagship after its parent company liquidated its assets, Macy’s announced plans to close hundreds of stores, Lord & Taylor was sold to clothing rental startup Le Tote for $100 million and Barneys New York was sold for $271 million with plans to close the majority of its seven stores and license its name to competitor Saks Fifth Avenue.

“Anybody that was on thin ice, so to speak, before the pandemic is going to either file for bankruptcy or close,” he said. “If you were having a difficult time before the closures and COVID-19, I can’t see how you operate.”