Missing: The Tenants Who Have Up and Ghosted Their Landlords for April Rent 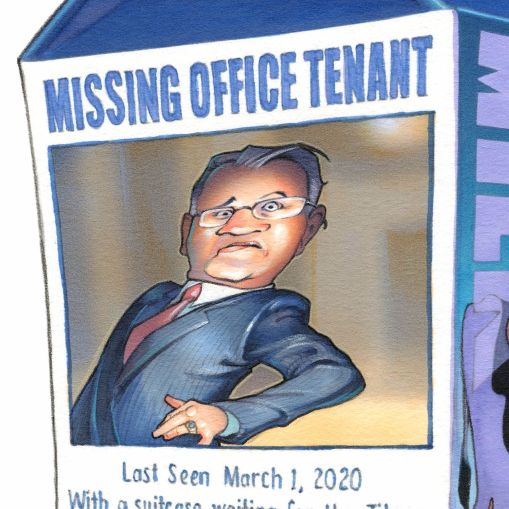 Landlords expected many tenants asking for a break on April rent, but some disappeared all together. Illustration: Eric Westbrook

Landlords were prepared for many tenants to come knocking, hat in hand, in April as the spread of the novel coronavirus forced offices to empty and retailers to temporarily shutter. But some tenants have disappeared altogether.

Owners told Commercial Observer that many tenants unable to pay the full April rent gave notice about their situation beforehand, but some took the tactic of ghosting landlords completely.

“We sent a letter out to all tenants encouraging them to apply to the [federal] loan program,” said Eric Gural, the co-CEO of GFP Properties. “Most did not reach out to us and have not paid. They should be reaching out and communicating. A lot of them are not doing that.”

Jared Epstein, a principal at Aurora Capital Associates, said he was “happy” to work with tenants in his portfolio who needed help, offering some deferrals, but it’s hard to come to an agreement with the few tenants he had who went radio silent.

“No communication at all and just non-payment of rent, obviously that’s the worst-case scenario and hinders the relationship,” said Epstein. “Not paying and not having a discussion about how we can move forward together, then there’s no reason for us to continue to try to fix that relationship.”

Both Epstein and Gural declined to name tenants who didn’t pay or give notice, but Gural said they weren’t just smaller companies.

“It’s a huge amount of tenants that are not paying rent,” Gural said. “Big public companies who have plenty of money. It seems that there’s a tone they shouldn’t have to pay anything.”

As the Wall Street Journal and CO previously reported, companies that failed to give payment notices included WeWork, Knotel, LVMH, Staples and Victoria’s Secret. Others who haven’t paid but send blanket notices include Nike, the Cheesecake Factory and Subway.

Epstein said it looked like some well-funded companies have been trying to push the limits of what they can get away with from owners during the coronavirus epidemic.

“They’re testing landlords and they’re seeing where they can take advantage if they can,” Epstein said. “This is, unfortunately, an opportune time for businesses and people to try to take advantage of the situation by threatening either non-payment or that they’re going to go out of business even if they’re in strong financial health.”

David Benzakarya, the owner of Treeline Property Group, which owns multifamily buildings and smaller commercial properties in Brooklyn and the Bronx, said it was generally tenants in his portfolio that gave him problems beforehand who have been dodging his calls.

“It’s the ones that always give trouble, they’re just hiding,” Benzakarya said. “I’m being proactive. And I’m not being rude or mean. I’m not being an asshole either. But I’m in the situation myself also.”

Most agreed that simply not talking to their landlord first about an inability to pay was the worst tactic a tenant could take. Many owners have been willing to work with companies, but it can’t happen without a phone call.

“It’s really unwise for tenants to merely take it upon themselves and engage in that type of self-help,” said Bonnie Y. Hochman Rothell, the chair of the litigation practice for Morris Manning & Martin who’s been advising landlords, lenders and tenants on these issues. “It’s going to come back to haunt them.”

A poll earlier this month of 1,000 small businesses from social networking company Alignable found nearly 30 percent haven’t made any rent or mortgage payments, with 20 percent reporting making partial payments, according to WSJ.

Many have been trying to use the force majeure clause in their lease  — which outlines certain unforeseeable circumstances or “acts of God” to prevent someone from fulfilling a contract — to get out of payment.

Rothell said those are unlikely to succeed since the majority of force majeure clauses only outline specific parts of the lease that can be excused when triggered and paying rent is rarely one of them.

“It might change an obligation under the lease, but it usually doesn’t change the ultimate obligation to pay rent,” Rothell said. “Even if it’s not specifically excluded by the terms of the force majeure, generally courts will narrowly construe the force majeure to indicate that inability to pay rent is not excusable.”

Rothell added that many companies tried to use that clause after the 2008 financial crash to get out of paying rent but were unsuccessful.

For certain tenants, even notice about not being able to pay won’t help. The WSJ reported that some mall and shopping center-owners started to compile a “blacklist” of larger tenants they believe have the funds to pay.

Epstein didn’t go that far, but did say not receiving a notice factored into his decision to work with tenants on things like deferrals.

“It comes down to the relationship between the landlord and tenant,” Epstein said. “Not just human relationships, it also has to do with how they were as a tenant in the building. Were they a noisy tenant, their interaction with the building staff. All those things come into play when you’re thinking about extending relief.”

Gural is also willing to help, but was surprised about how many companies refused to give any money towards the rent so far, even as GFP still has plenty of costs for its properties.

“I can’t cut the costs that I’m obligated to pay, it’s really unfair that I have to pay,” he said. “It’s very shocking how many people think they can walk away from those responsibilities.”

Epstein and Gural’s complaints lied solely with larger corporations, not smaller operators really suffering from the effects of the coronavirus. Both said they were more than willing to work with those companies and weren’t looking to put anybody out of business.

Ghosting for big corporations are one thing; mom and pop businesses are a different matter. Losing touch might have nothing to do with dodging the landlord. The explanation could always be far more heartbreaking.

James Famularo, the president of Meridian Retail Leasing, said a reason some of the smaller retail owners might not have reached out is they might be one of the more than 10,000 people who lost their lives due to the coronavirus.

“You know how many people I talked to that said the staff and some of the principals are dying or are dead?” Famularo said. “Maybe the landlord hasn’t heard from the tenant because they aren’t with us anymore.”

Patient landlords may need to exhibit even a bit more fortitude, he said.

“My advice to landlords is if you haven’t received a check, maybe send an email to check on the tenant to see how they’re doing, how they’re dealing with this,” Famularo said. “If the tenant is hysterical, maybe give them a few weeks and have another conversation with them. Now is not the time to put pressure.”

Epstein and the other owners echoed Famularo’s sentiment that a large amount of understanding was important for both landlords and tenants since everybody has been dealing with the fallout from the pandemic.

“We’re all in this together,” he said. “Everybody needs to stay on the same page.”