Loan on The Distrikt Hotel in Midtown Sent to Special Servicing

The $34.8 million CMBS loan secured by The Distrikt Hotel between Times Square and Hudson Yards has been sent to special servicing. 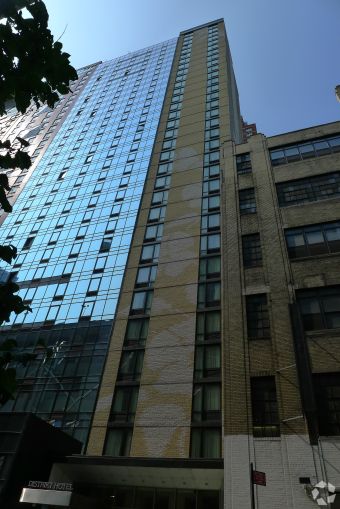 COVID-19 has claimed another securitized hotel mortgage, adding to the growing list of commercial mortgage-backed securities (CMBS) loans backed by hotels and retail properties that are bleeding cash due to closures caused by the outbreak.

The $34.8 million CMBS loan secured by The Distrikt Hotel located between Times Square and Hudson Yards has been sent to special servicer Rialto Capital Advisors for consideration, according to servicer data released this month and presented by Trepp. The debt was originated in April 2012 by Bank of America.

Even prior to the novel coronavirus outbreak, the 32-story, 155-key and full-service hotel at 342 West 40th Street — founded in 2009 — had been added to its master servicer’s watchlist due to falling debt service coverage ratio (DSCR), which registered in at just 0.89x for the first nine months of last year, mostly due to “competitive surroundings,” as per watchlist commentary and Trepp analysis, despite a 96 percent occupancy rate. Its DSCR at the time of its securitization in July 2012 was 1.54x.

The sponsor was able to cover its March 1 debt service, but it was ultimately transferred to Rialto on April 1 due to “imminent monetary default.” The hotel is currently closed — as is its other locations, including one in Pittsburgh, Pa.

The sponsors of the hotel loan are listed in CMBS transaction data as Victor Afonso, Kevin Fee and Scott Schroder of New Jersey-based Greenway Holdings, although city mortgage records show that Greenway sold all or part of its stake in the asset to Great Neck, N.Y.-based Gould Investors in April 2012. The nuances of the sale could not immediately be gleaned as Greenway could not be reached and officials at Gould were not immediately available to return an inquiry.

Greenway is responsible for the “Distrikt Hotel” brand, which Alonso and Schroder have claimed responsibility for having founded in 2009, when they opened the first ever Distrikt Hotel near Times Square, the subject of this servicing transfer, as per information from a Pittsburgh Business Times (part of the Biz Journals roster of publications) report from 2014; its report details the opening of another such hotel in Pittsburgh.

The hotel in Times Square was ushered under the Hilton flag in June 2018, when it began operating as a “Tapestry by Hilton.”

The original, securitized mortgage of $39.9 million had a loan-to-value of just 60 percent, as the property’s value at the time of the deal in April 2012 was $66 million. Since it was securitized, over $5 million in principal has been repaid. It also has just under $1.8 million in available reserves, as per Trepp data.

The mortgage makes up just over 3.6 percent of the collateral behind the Morgan Stanley-led MSBAM 2012-C5 CMBS conduit transaction, which has a securitized balance of $1.35 billion, as per CMBS data from Trepp.