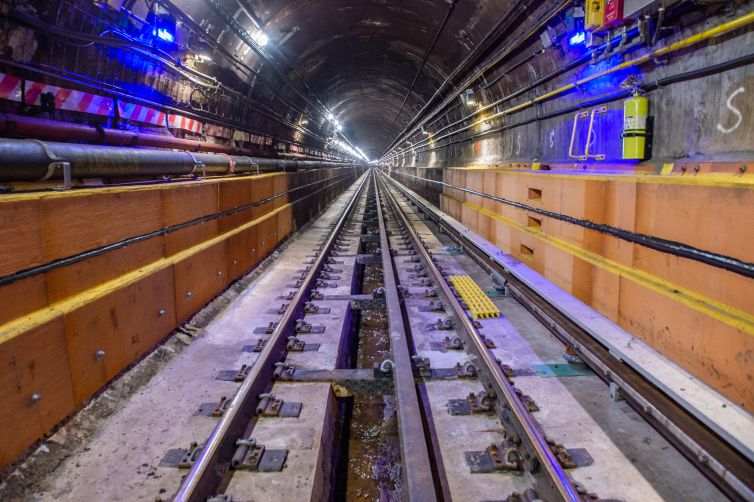 MTA crews finished repair work on the L train tunnel between Manhattan and Brooklyn ahead of schedule and under budget. Photo: Trent Reeves/MTA Construction & Development

The repair work on the L train tunnel between Brooklyn and Manhattan finished construction ahead of schedule and under budget, with regular service on the subway line set to resume today, New York Governor Andrew Cuomo announced.

Repair work on the underwater Canarsie Tube, which was damaged by floodwaters during Hurricane Sandy in 2012, was completed three months earlier and cost more than $100 million less than originally planned, Cuomo said. The repair work started in April 2019 following much hand-wringing over disruptions to the popular line.

“While New Yorkers continue to cope with the devastating impact of COVID-19, the L train project completion is timely proof that when we are confronted with a challenge we can build back better and stronger — especially when we work together and think outside the box,” Cuomo said in a statement.

Superstorm Sandy flooded the 1.5-mile tunnel under the East River with millions of gallons of saltwater and weakened the cement bench wall that holds power cables and other infrastructure into the tunnel.

The Metropolitan Transportation Authority spent three years planning to repair the damage by completely replacing the bench wall and shuttering L train service between Brooklyn and Manhattan for 15 months. However, Cuomo swooped in months before the shutdown would begin with an alternative plan that would instead limit service on nights and weekends while crews implemented a new method of fixing the tunnel.

“Everyone said we had to shut down the tunnel for 15 to 18 months, which was going to be a massive disruption for thousands of New Yorkers who rely on the L train,” Cuomo said in a statement. “We challenged those who said there was no alternative solution and as a result today the MTA is delivering a more resilient tunnel with improved service that is ahead of schedule and under budget — all while averting a shutdown.”

Under Cuomo’s plan, workers left the bench walls and the cables mostly as-is and only replaced unstable sections and wrapped it in fiberglass. MTA crews also installed a new system of electrical cables and sensors along the sides of the ones, with some sensors able to detect cracks in the bench wall.

Cuomo’s plan averted a total shutdown of L train service between Manhattan and Brooklyn and instead closed one of the two tunnels on nights and weekends so the other could be repaired and limited service to 15 to 20 minutes between trains.

While avoiding the shutdown drew praises from tenants and brokers in Williamsburg and Bushwick worried about the impact on the residential and commercial market, the 11th-hour change of plans caused a strain on Cuomo’s relationship with the popular then NYC Transit President Andy Byford. Things continued to deteriorate and Byford left his post in January.

“Even in the face of this unprecedented global health crisis, the MTA delivered this project safely, months ahead of schedule, well under budget and with no shutdown of service,” Patrick Foye, the chairman and CEO of the MTA, said in a statement. “This innovative approach is further proof that the ‘new’ MTA is committed to doing things differently to the benefit of our customers.”