Buh-Byford: Andy Byford has given up trying to fix Gotham’s transit problems 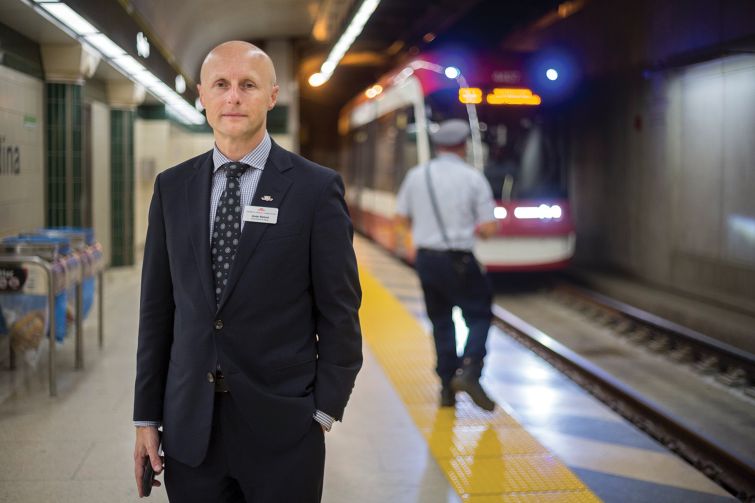 When the Metropolitan Transportation Authority hired Andy Byford in November 2017 it seemed like a fortunate lark.

The beleaguered transit agency had just endured a “Summer of Hell” (as Commercial Observer, among others, have reported) in which commutes ground along with hour-long delays thanks to track fires, signal malfunctions, and mechanical failures.

Gov. Andrew Cuomo declared a “state of emergency” and asked then-MTA chairman Joe Lhota to draw up a reorganization plan that involved a global search for someone to run New York City Transit. He also held a contest for transit experts to find solutions that reduced delays, which included Byford as a panelist.

The Toronto Transit Commission CEO impressed MTA leaders who brought him to New York to run the fifth longest subway system in the world and touted his successes on three continents.

His gravitas and vast passion for transit won over cynical straphangers who hailed the bureaucrat as a celebrity, according to the New York Post. “Train Daddy” stickers affixing Byford’s face to a rail car began proliferating throughout the city in a befitting tribute, reported Patch.

Byford said all the right things about how he would modernize the subways and then acted on them. In 2018 he proposed a “Fast Forward” plan to upgrade antique signals on multiple lines with the modern communication-based train control system and to install elevators in stations to make them more accessible, according to Curbed.

In order to fund the MTA’s $52 billion five-year wish list of capital needs, the state legislature passed congestion pricing that could give the authority about $1 billion in annual revenue once it launches in 2021.

But Byford would never be in control of plans to overhaul the subways; not when several MTA board members, including the state budget director, and top MTA officials report directly to the governor.

There were immediate questions about whether Byford could avoid the political sniping between Cuomo and Mayor de Blasio, whose relationship had careened off the tracks.

He experienced the governor’s strong-willed management style firsthand when Cuomo rejected the MTA’s 15-month plan to close the L-train tunnel between Manhattan and Brooklyn and ordered an alternative solution with additional experts.

Byford sought guidance from city elders like former MTA chairman Dick Ravitch about how to maintain his independence to do his job.

“He came to see me several times originally and he was very upset with the governance of the MTA,” Ravitch told Commercial Observer. “There’s also the question of money. The plan that the MTA pushed through called for expenditure of vast sums of money; that’s what’s needed but I think they’re kidding themselves that they’ll get all this money. And congestion pricing hasn’t even been done yet.”

The Times headline looks prescient two years later. Byford threatened to quit twice in 2019 over a power struggle with the governor, reported the Times and Politico, before being convinced to return to work. Several board members appointed by the mayor had resigned by then and Cuomo added a new team of transit experts in another MTA reorganization, giving Byford pause.

“My conversations with Andy were that he was proud of what he had accomplished,” Partnership for NYC President Kathy Wylde told CO. “He was reduced to operating responsibilities rather than the track he had been on, which had been envisioning the future of the system and leading that effort. He had less to do with the long-term planning and development leading the overall effort than the operation of the trains. That’s not what he came here to do.”

A few weeks into the new year, Byford resigned for good.

“The [MTA] transformation plan called for the centralization of projects and an expanded HQ, leaving agency presidents to focus solely on the day-to-day running of service,” Byford wrote in his resignation letter on January 23. “I have built an excellent team and there are many capable individuals in transit and others within the MTA family, who could perform this important, but reduced, service delivery role.”

His fans at the transit authority, City Hall, and throughout the five boroughs were distraught.

“You can be sure to see an exodus of MTA talent in the wake of Andy Byford’s departure,” former MTA board member Veronica Vanterpool tweeted. “He is the reason so many people have been inspired to work at New York City Subway and Bus despite the negativity. So much talent already left the MTA especially in the past year. We know why.”

Brooklyn Council members Stephen Levin and Antonio Reynoso tweeted they would miss him. Queens Borough President James Oddo posted a video of a meeting with Byford and noted his appreciation “when we have genuine partners in government who want to work with us to improve our Island.”

The blame over Byford’s departure took the express track straight to Andrew Cuomo.

“Cuomo was never going to let the Andy Byford fix New York City’s Subway,” snarled The Post’s Steve Cuozo. His colleague Nicole Gelinas asked, “Why would anyone take over after Andy Byford fled the MTA?”

Cuomo deflected responsibility for the transit president’s exit, saying at a press conference he didn’t think there was “any truth that Byford couldn’t get along with me.”

That didn’t stop city leaders from floating the idea of local control of the subway system.

“It makes no sense that the city doesn’t control our subways and buses,” Speaker Johnson said in a statement to CO. “Their success is integral to our success, and yet we have virtually no say in how they are run. In addition, there’s no accountability under the current system. It’s designed so everyone can point fingers at one another and deflect blame.”

Brooklyn Assemblyman Robert Carroll introduced a bill that would put management of the New York City Transit system in the mayor’s hands and cede control of other railroads to suburban county leaders outside of the city.

“Right now, the MTA is set up to fail and its governing structure is purposely opaque. The city accounts for 42 percent of population but only counts for 30 percent of the vote” Carroll told Commercial Observer. “The state already pays for 40 percent of schools but they don’t micromanage how they run schools. There’s no reason why the MTA can’t be the same thing.”

But transportation advocates dismissed the idea, arguing that the state has the authority to raise taxes and fees that would cover the costs of the system and the city can’t handle the responsibility.

“The governor is responsible for the subway and he is also capable of raising the money to retain it,” Daniel Pearlstein, a spokesman for the transportation advocacy group Riders Alliance told CO. “That isn’t true for the mayor and the Council. There’s very little ability for the city to raise the kind of revenue required to periodically fix and operate the subway.”

Whoever replaces Byford will lead an agency at a crossroads. State lawmakers grilled MTA Chairman Pat Foye last week about the direction of the authority without Byford, as the authority proceeds with $8.8 billion in construction work over the next two years. And plans to revamp the Brooklyn and Queens bus maps are fluid as public officials and residents scrutinize their designs to build on the successes of the 14th Street busway.

“The more you can do on the streets to improve buses, the faster you can make repairs underground,” said Regional Planning Association senior vice president Kate Slevin. “To the extent we can see more corridors in the city become like 14th Street has, where you prioritize bus service and improve air quality that will be better for the city and make subway improvements move at a faster pace.”

Business leaders remain optimistic that the governor and the people currently working in the MTA can continue the positive track on which Byford put the city’s transit. But ultimately the health of the subways, like so many other things in the state, rests with the governor.

“The governor has to feel proprietary about that agency or it won’t get the resources and attention it needs to make up for years of aging out and failure to innovate,” Wylde said.