Designing Offices, Restaurants and Grocery Stores in the Age of Coronavirus 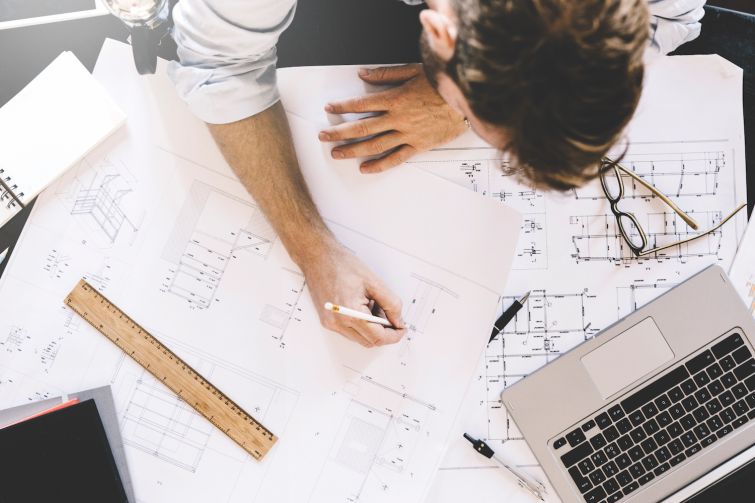 Architects are rethinking all kinds of spaces, from offices to grocery stores, to accommodate social distancing and better hygiene in the wake of the coronavirus pandemic. Photo: Getty Images

As New York City and other communities across the U.S. grapple with the coronavirus outbreak, architects are thinking about how to make regular people safer when they finally return to work and normal life, whether it’s in grocery stores, schools or typical offices.

Office designers are considering interventions large and small to encourage workers to spend time in an office post-COVID, such as adding barriers between desks, using antibacterial coatings, and adding touchless technology to frequently touched surfaces like doorknobs, faucets and elevator buttons.

And even though employers will try to create more space between workers, companies may plan to have a significant percentage of their employees work from home. Others will rotate which days and hours employees come into the office to ensure that people can be properly socially distanced.

“Office space is going to be inherently less occupied moving forward,” said Alex Dunham, the director of workplace strategy at architecture firm HLW. “What percentage of people relative to the pre-pandemic state decide to work from home consistently? Whether it’s a 50 percent increase or 200 percent increase, who can say?”

Dunham also thought that in the long-term, cities might regulate how many people can be in a specific office, in order to reduce occupancy below pre-pandemic levels. In the short-term — at least until there is a vaccine for COVID-19 — landlords and tenants have to think about ways to properly social distance their workforce and keep spaces disease-free.

The big question plaguing designers, brokers and employers is whether companies will need to increase or decrease their square footage in the wake of social distancing.

“Let’s say your average open-plan desk is six by six [feet], 40 square feet, and then you need another 40 square feet to be away from someone else,” said Tom Vecchione, a principal at Vocon. “Even though [the employee] population might decrease, the square footage per employee might increase by 20 or 30 feet.”

Julia Lindh, who runs the Stamford office for architecture firm MKDA, said that she was telling clients to go no smaller than a six-foot workstation and to add sneeze guards or other barriers between desks. Certain office furniture makers, like Herman Miller and Steelcase, already produce barriers that feature shelves and function as storage for desk users. Some architects are advising companies to put in barriers that can slide up and down, so workers can talk to each other and then put up the barrier when they want privacy or are worried about germs.

“We’re going to see more health care materials being used” in an office setting, said Lindh, such as antibacterial coatings and fixtures made of copper, which has long-documented antibacterial properties. In addition, scientists have recently developed antimicrobial coatings that mimic shark skin, which has tiny diamond-shaped ridges that help sharks swim quickly. The 3D-printed fake shark skin reduces up to 80 percent of bacteria on high-touch surfaces in hospitals, research shows, and it could be used similarly in offices, Lindh noted.

Hands-free technology for toilets, faucets and even bathroom stalls will likely become much more standard. Some landlords might consider voice-activated elevator technology, which has been used in Japan but very little in the U.S. Or perhaps they’ll install the more common feature of swiping or waving a preprogrammed card in front of a reader that takes workers to a specific floor.

There’s also the question of preventing bottlenecks and crowding when people enter buildings. If owners limit the number of people in lobbies or elevators, there may be long lines to enter office buildings. Vecchione said that commercial building owners could open service entrances to office workers and convert retail or loading docks to new lobbies in order to encourage more social distancing.

“We’re looking at new opportunities to break down building density,” he explained. “Giving tenants their own entry points, having a building within a building, is going to be even more important.”

Allowing visitors to preregister, get passes on their phones and then swipe through touch-free turnstiles may become a much more widespread phenomenon, he said. Landlords and tenants could also work together to manage when employees come into the office, in order to stagger arrival times across the day or on different days.

He also suggested converting freight elevators to passenger use and repurposing fire-exit stairs for regular use, in order to prevent lines of workers waiting for elevators.

In bathrooms, he suggested that landlords or tenants could put in “hygienic vending machines” or a “nicely curated installation” of sanitizing products, like Clorox wipes and hand sanitizer, so employees have the ability to disinfect their own space.

Another issue is air circulation. Older office buildings, much like airplanes, are often plagued by recycled indoor air and inoperable windows. In the short term, designers are advising landlords to put in windows that can actually open, allowing more direct fresh air and better circulation throughout offices. Over the long term, owners who want to have healthier buildings could install mechanical ventilation systems that circulate more fresh air from outside.

Lenders and investors could even require that developers make “antiviral” upgrades to buildings in order to get funding.

“The only way this will make change is if the funds that invest in real estate say, ‘We won’t lend you the money to build this unless you make it contagion-friendly,’ ” said Darren Comber, the CEO of London-based architecture firm Scott Brownrigg.

Across the board, he said, both commercial and public spaces may need to become more compartmentalized to discourage the spread of the novel coronavirus. His firm used prediction modeling to examine the spread of potential contagions when they designed a new airport in Istanbul last year. Different areas in the airport can be closed off to prevent the spread of contagion, he explained, and that feature has been used during the pandemic. Those ideas aimed at limiting community spread could be implemented in office buildings, schools, stores and other high-traffic spaces.

Some have begun already putting procedures in place. Cushman & Wakefield’s Netherlands office last week unveiled a “6 Feet Office” program. The guidelines involve marking off designated spaces for people to stand in their offices at a distance, creating a directional flow of people through the office (clockwise) to decrease the chance of people running into each other, and giving employees disposable mats to place beneath their keyboards and computer mice.

Food retailers may also change dramatically in the post-coronavirus world.

Fast-casual restaurants, for instance, may move away from the popular open kitchens shielded only by low glass barriers. Restaurants may move “to a more enclosed ghost kitchen,” said Vecchione, the architect from Vocon. “It won’t be about exposing the cooking of the food and ingredients” to the open air and the general public. And lunchtime food purveyors could prohibit customers from standing in long lines to wait for food. Ordering in advance online and picking up food at the restaurant may be the only way to grab a casual lunch in the future.

Lunch spots at the bottom of office buildings may even be reconfigured to serve tenants in the building better, he said, and to discourage workers from leaving the building. They could be set up to offer separate areas for the public and for building tenants, so that office employees in the building can feel safer eating at those restaurants. Retailers could even offer lunch deliveries within the building, he said.

And grocery stores, which have been increasingly scrutinized during the coronavirus outbreak, may have to completely shift the way they do business.

Many supermarkets in New York City and other parts of the country have started forcing customers to line up outside, in order to limit the number of people who can enter. Others have put down signage to make aisles one-way, so that customers aren’t passing each other going opposite directions.

If cities and states decide grocery stores encourage viral spread, changes to store layouts and occupancy may be required by law in the future.

“What do things look like on the other side of this pandemic?” asked Shane Aaron, a partner at Tulsa-based Selser Schaefer Architects. “What’s going to drive the new normal? Is it going to be based on consumer expectations of what they want to keep them safe, or is it going to be legislative action?”

Aaron has already seen possibilities for change while redesigning stores for H-E-B, a large grocery chain based in Texas. The pandemic will likely accelerate the grocery industry’s transition toward e-commerce, he said.

“We helped H-E-B roll out their curbside program, which, for existing stores is a small expansion and for new stores, it’s built into their existing design,” Aaron explained. “You schedule the order, it’s held in a cooler, and then when the customer is ready to pick up, they pull up, sign in to an app and have it loaded into their car.”

Touchless checkout tech could become more widespread as well, allowing shoppers to buy items in-store without ever interacting with a human cashier. Customers would be able to put groceries into their cart, and as long as they’re signed into the grocery store’s app, their purchases would be automatically detected and rung up as they walk out of the store.

Shoppers have become increasingly comfortable buying staple items online, he said, but people remain hesitant about ordering produce and meat without seeing them first. In the post-pandemic future, “Stores may become more like fulfillment centers and showrooms,” Aaron noted. “Store personnel may just pack the orders and take them out the door to the customer.”

The showroom approach, for example, would enable buyers to look at items and judge their freshness without necessarily touching them. Alternatively, stores may not allow customers in at all, and only serve as hubs for packing and delivering groceries.

“It’s still pretty early to tell what the long-term impact is,” said Aaron. “There will be permanent change to grocery stores and other retail environments. What will drive it is how long this remains in the public consciousness. Six months after we’ve seen the end of this does life go back to normal?”

“Everyone is financially strapped right now, and everyone is thinking about how they’re investing their capital,” he added. “But I don’t know if anyone wants to invest in what could be some very costly upgrades if they don’t know how their business will be impacted.”