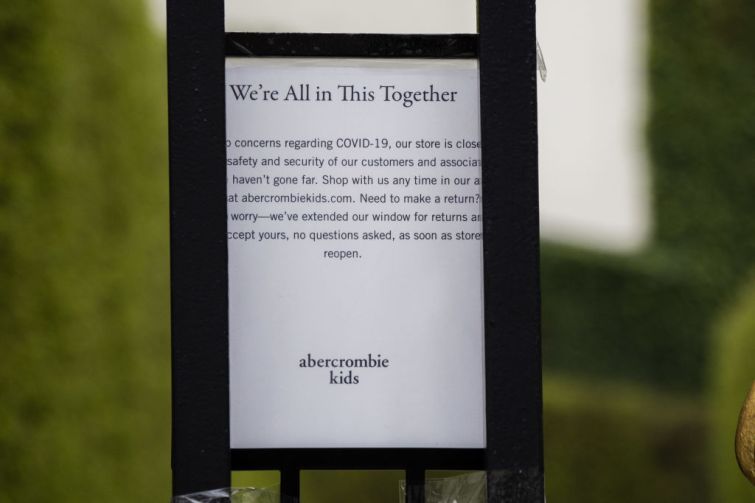 Clothing retailer Abercrombie & Fitch furloughed 2,670 retailer workers in New York State, with 1,166 of the job losses in New York City, as the coronavirus pandemic forced it to shutter its stores, state records show.

Abercrombie & Fitch — which also owns Hollister Co. and Abercrombie Kids stores — temporarily cut all its retail workers at its eight NYC locations in Manhattan, Brooklyn and Staten Island, citing COVID-19 as the reason, according to a WARN Act notice filed last week but made public today.

“As our Abercrombie & Fitch and Hollister stores remain closed in New York, we furloughed our store associates beginning April 12,” a spokeswoman for the company said in a statement. “Eligible associates continue to receive enrolled benefits during this time. We remain optimistic for the future and look forward to the time when our associates can return to our stores and continue to provide a great experience for our customers.”

The company announced the cuts earlier this month but did not say how many workers would be impacted.

“These are never easy decisions to make, but we believe they are necessary as we manage through this period of uncertainty,” CEO Fran Horowitz said in an April 6 statement.

Retailers have already been struggling to survive as the rise of online shopping drove sales down and caused brands to shutter locations or declare bankruptcy, before the coronavirus forced most to close their doors.

Sales in retail stores dropped a record 8.7 percent from February to March, according to the United States Census Bureau. It was the largest month-to-month decrease since the federal government started keeping track of the numbers in 1994. The figures only represent a small sampling of the coronavirus’ impact since the strictest measures were put into place towards the end of the month and economists expect April’s numbers to be much worse.

The closures and drop in sales have forced retailers to lay off thousands of employees. Department store Macy’s furloughed most of its 130,000 employees while electronics chain Best Buy announced this week it would temporarily cut nearly 51,000 store employees starting on April 19.

The 128-year-old Abercrombie & Fitch was already struggling to turn around the company after facing huge losses of sales in the early 2000s and closed 450 stores between 2010 and 2018, Business Insider reported. The turnaround efforts were starting to work, with the company reporting five consecutive quarters of positive comparable sales — along with its Abercrombie & Fitch label itself last quarter posting its best comparable sales since at least 2010 — before the coronavirus forced it to close its stores on March 15, according to Business Insider.

Update: This story has been updated to include a comment from Abercrombie & Fitch and clarify its fourth-quarter performance numbers.