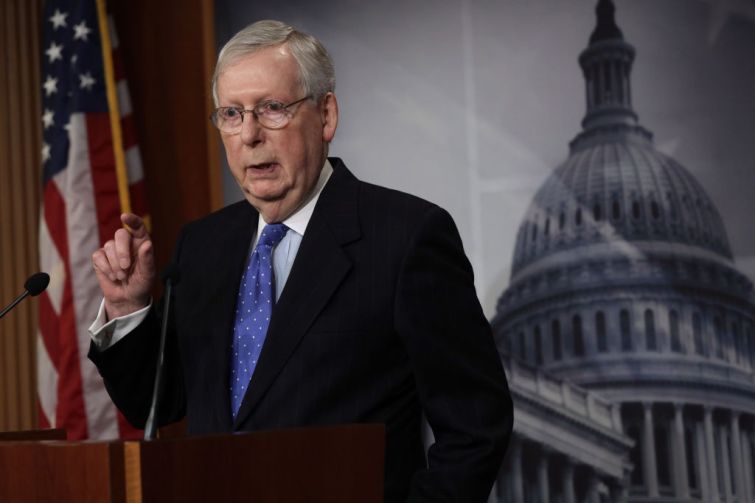 While the country held its breath this week, Congress battled over a $2 trillion stimulus package that could offer relief to an economy paralyzed by the global coronavirus pandemic.

The Senate passed the $2.2 trillion bill unanimously late Wednesday night, and it now moves to the House, where it’s expected to pass Friday morning.

The bill, dubbed the CARES Act, would offer a variety of relief that includes direct payment to families, small business grants to cover payroll and rent for two months, and industry-specific subsidies. It also provides $150 billion for state and local governments and funds to bolster healthcare and hospitals as shortages of ventilators, staff and basic protective equipment grows increasingly acute.

The bill has gone through several iterations. Democrats blocked a version that would have provided $500 billion in aid to corporations without significant oversight, while Republicans objected Wednesday afternoon to the provisions for unemployed workers, which they said were too generous and would incentivize joblessness.

While the relief package will be the largest in the country’s history, far larger than the $700 billion Wall Street bailout package during the Great Recession, some experts are cautioning that it isn’t a panacea that can stave off a recession.

Nevertheless, markets surged Thursday in response to the progress made on the bill, despite the news that a record 3.3 million jobless claims had been filed last week, the largest week-over-week increase in the nation’s history.

Of the many provisions in the bill, here are some of the key programs inside the bill that can help business owners in the real estate industry:

Congress has dedicated $350 billion to help small businesses stay afloat during the outbreak and prevent layoffs, through a loan program administered by the Small Business Association. Companies with 500 employees or fewer that don’t lay off any workers can receive up to eight weeks of cash assistance to cover costs. If employers maintain payroll, the amount used to cover payroll, interest on mortgage obligations, rent, and utilities would be forgiven.

Under the existing SBA loan program, the SBA guarantees $25 billions in loans which are sourced from private lenders. Per the legislation, businesses can apply for loans at up to 250 percent of their monthly payroll, and caps will be lifted from $5 million to $10 million.

For small-business landlords, the relief is twofold, since they’re eligible for the loans, and it helps their tenants pay rent.

The bill has several tax-related programs to help businesses. For one, businesses can defer payroll taxes through the end of the year.

Second, small-business employers who don’t apply for the SBA loans can get a tax credit for maintaining payroll during the outbreak. Qualified businesses will receive half of what they paid in wages, with a cap of $5,000 per employee. To qualify, businesses have to prove they lost 50 percent of their revenue compared with the same quarter in previous years.

The bill allocates $425 billion for corporate assistance, through a fund controlled by the Federal Reserve that would provide loans to distressed companies. Companies that receive the loans will have to abide by certain restrictions, such as refraining from stock buybacks while receiving assistance, and the loans will not be forgiven.

After Democrats’ insistence, oversight for the fund will include a newly-appointed inspector general and a five-person oversight board, approved by Congress. In previous iterations, the billions in handouts would have been up to the discretion of Treasury Secretary Steven Mnuchin, and the names of companies receiving assistance could have been concealed for six months.

In addition to the general corporate fund, $75 billion was allocated to specific industries hardest hit by the coronavirus. The majority of it, $58 billion, will go to both passenger and freight airlines, with $29 billion in grants and $29 billion in loans. Another $17 billion is allocated for companies deemed crucial for national security. Cruises and casinos were not included on the list of designated industries, despite earlier comments from President Trump that singled them out, and calls from the tourism and travel industry asking for $300 billion in aid during early negotiations were also denied.

The bill allocates $150 billion in funds to state and local governments to help with their relief efforts, with $3.8 billion going to the state of New York, of which $1.3 billion will be allocated for New York City.  Both Governor Andrew Cuomo and Mayor Bill de Blasio have noted that those amounts are insufficient. New York, which is currently the epicenter of the outbreak in the United States, is expecting a $15 billion budget shortfall, Cuomo said, and has already spent over $1 billion on coronavirus-related matters.

Additional key provisions in the bill include $100 billion for hospitals and direct payments of $1,200 to individuals making less than $75,000 a year, plus $500 per child, and extended unemployment benefits. The bill also included $24 billion in aid for ranchers and farmers, $25 billion for public transportation, and a variety of tax deferrals.

In addition to the federal relief bill, federal agencies have announced their own interventions. The Federal Reserve has promised extraordinary measures to shore up markets, the Financial Housing Finance Agency has offered mortgage forbearance for landlords with agency loans who don’t evict tenants, and the Internal Revenue Service has delayed the tax deadline to July.