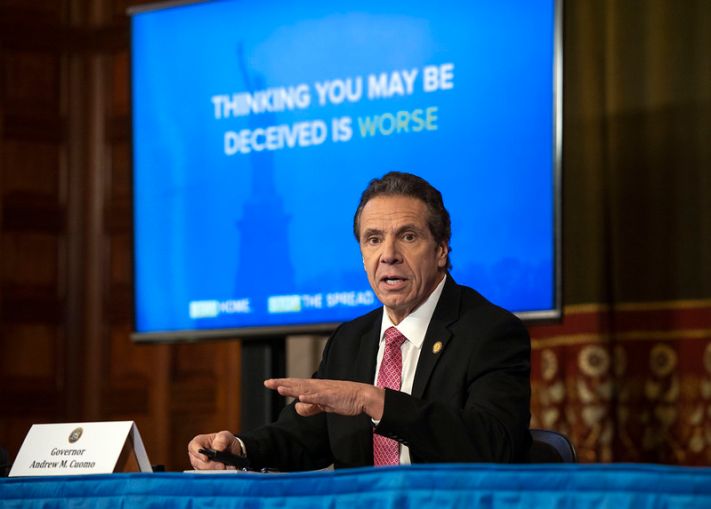 The state halted all non-emergency construction work in New York to help stop the spread of the coronavirus. Photo: Mike Groll/Office of Governor Andrew M. Cuomo

New York State stopped all non-emergency construction work in an effort to slow the spread of the coronavirus after calls from local politicians and workers themselves to close job sites, Governor Andrew Cuomo announced today.

Only construction deemed essential by the state will be allowed to go on; job sites including “roads, bridges, transit facilities, utilities, hospitals or health care facilities, affordable housing and homeless shelters,” according to the Empire State Development Corporation’s (ESD) updated guidelines. Contractors who flout the measure could face up to $10,000 in fines per violation.

“Construction that is essential to keep the place running [will go on], but nonessential construction is going to be stopped,” Cuomo said today at a press conference.

Other cities — including Boston — previously have taken similar measures and New York City politicians including Mayor Bill de Blasio and Councilman Carlos Menchaca had called on the state to follow suit.

Many job sites force construction workers to work in close proximities — making it impossible to keep the recommended six feet away from one another to stop the spread of COVID-19 — and often have to work in unsanitary conditions. The New York Times reported yesterday that construction workers had to reuse the same masks, were called back to sites even if another worker contracted the virus, and were forced to use a single portable toilet that rarely has soap or hand sanitizer inside.

Carlo Scissura, the president and CEO of the New York Building Congress, said in a statement that the “health and safety of building industry workers and every New Yorker remains the highest priority” and called on the state to increase the amount of emergency construction being done around the city.

“It’s equally important to continue advancing projects through the planning and design process in order to not lose valuable time,” Scissura said in a statement. “The Building Congress will continue working with our leaders at all levels of government to ensure that New York and our building industry come back from this crisis stronger than ever. Now is the time to create a plan for a substantial public works stimulus package to rebuild our nation and restart our economy.”

Last week, Cuomo ordered all nonessential workers to stay home as the state’s number of coronavirus cases surged, with recent numbers showing 44,635 people who tested positive for the virus and 519 deaths. However, the order classified some businesses as essential and allowed workers to show up, including all construction sites.

Developers around the city had stopped work on their project before the state updated the guideline, including Extell Development’s $4 billion supertall Central Park Tower which halted construction earlier this week, as Commercial Observer previously reported.