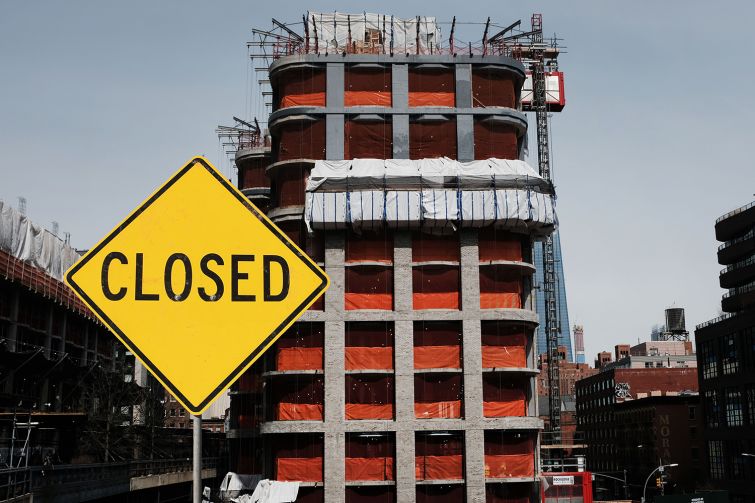 Recording offices closing or modifying their hours has created hurdles for lenders trying to access, record and file necessary construction loan documents. With this, issues have surfaced in some areas, where lenders are having trouble securing lien priority as well as subsequent title insurance commitments. Image: Spencer Platt/ Getty Images

Across the country, counties and municipalities have been shutting down places of work in efforts to encourage social distancing and stem the spread of the novel coronavirus. This includes county and city government recording offices that facilitate the processing of critical commercial real estate documents — such as deeds of title and mortgage records — that are ultimately responsible for the closing of commercial real estate transactions.

With the shuttering of these offices, a new storm is brewing in the commercial mortgage space, a phenomenon that could significantly slow or even impede dealmakers’ ability to properly close some real estate transactions.

“[New York City] is close to the point where you can’t pull the necessary records to check for liens and judgments — things you can’t verify electronically,” Eric Orenstein, a member within law firm Rosenberg & Estis’ transactional department told Commercial Observer.

Orenstein was first alerted to the issue last week, he said.

“When we sent out escrow instruction letters, which outlines how we’re closing the deal, we got responses back from title companies saying they couldn’t guarantee the recorder’s office would be open,” Orenstein said.

The American Land Title Association (ALTA) reported Wednesday that more than 1,000 of the 3,592 recording offices in the country have either closed completely or modified their hours and services. The number could be much higher; just over 60 percent of the country’s recording offices haven’t reported any info about their respective statuses to ALTA.

In Long Island, Nassau County’s recorder’s office closed its doors last Thursday, although e-recording is an option, and has been for two years. New York City also benefits from an electronic recording system, meaning that transaction parties can still submit documents for recording electronically even if they’re working remotely.

But, New York City deal participants still have a problem to surmount today.

Closed recording offices remove the ability to physically file and access certain property records. Both actions are key in construction loans, where a building loan must be filed-of-record with a clerk and certain critical documents — such as mechanic’s liens — must be physically searched.

“If you’re doing a construction loan, you can’t proceed because you don’t have the ability to file a building loan agreement, which is filed as opposed to recorded,” Orenstein said, adding that “if you have a mechanic’s lien, you can’t file it,”

And without that ability, title insurance isn’t a given.

“Everyone is trying to keep things moving the best they can, but getting title insurance is basic to any real estate transaction,” Orenstein said.

In New York, there’s a rather large legal necessity for construction lenders that’s being emphasized due to the closures. In order for a lender to have priority over claims for a project from contractors and building materials providers who file their own claims (liens), it is required that the building loan agreement that’s necessary to protect a construction loan’s priority is filed with the County Clerk before recording the construction loan with the City Register’s office.

“The New York lien law is unique among the states in the U.S.,” Joseph P. Forte, general counsel for AmTrust Title Insurance Company, said this week. “[A lender must file with the] County Clerk’s office before it can record its building loan mortgage if it wants lien priority over the liens of mechanics and materialmen who will be working on the project and may file notices of their liens against the project, and thereby prime the mortgage.”

New York Lien Law also requires the simultaneous filing of an affidavit of the borrower that details the planned disbursement of the construction loan proceeds, Forte explained. The affidavit also sets the “soft costs” permitted to be advanced to the borrower and then details the balance of the construction loan as the amount available for “hard costs”, such as the paying the contractors on the project.

Since 1974, lenders have been unable to get waivers to assure the priority of their mortgage lien (an instrument that stakes the lender’s claim on an asset) ahead of prospective mechanics and materialmen’s liens (which guarantees separate claims on an asset for contractors and those who supply building materials for construction). Forte said this is a problem because a filed building loan agreement is key in that it “enables the mechanics and materialmen to understand the financing of the project before commencing their work or material delivery.”

Forte added that if the Clerk’s office happens to be closed, “recording the building loan mortgage will not protect its priority over subsequent mechanic and materialmen’s liens.”

The main issue today arises around “whether a title insurer would be willing to insure the building loan against future mechanic’s and materialmen’s liens, especially if [the title insurer is] unable to search the public records before subsequent [construction loan advances] due to recording and filing office closures, or due to reduced staff causing recording or filing delays,” Forte said.

Throughout the rest of the country, “the more impactful delays and intricacies will revolve around title commitments and date down endorsements, which will need to account for lag of recordation for things like lien waivers that cloud title,” said Ian Ross, the founder and principal of private equity real estate firm Somera Road, which focuses on acquiring and stabilizing distressed assets in secondary and tertiary markets.

Those who pulled title reports prior to the office closures are the lucky ones and can generally close deals quickly, but less fortunate market participants are scrambling to try to do deals without the ability to do all the searches necessary to get comfortable closing a transaction. “If I had a client who wanted to start a new deal today, I couldn’t get a new title report to confirm what I need to confirm,” Orenstein said.

As a way around it, certain title companies are having the borrowers or sellers in New York sign affidavits stating, for example, that they haven’t sold the property or done any construction work they haven’t paid for. “I’d never counsel a client to accept that,” Orenstein said. “It’s a lawsuit waiting to happen at some point.”

Some title companies are also asking that affidavits are signed shifting the burden of insuring the transaction on the parties not the insurer. If there is a strong borrower or seller who can backstop the indemnity with real dollars then this may be palatable for some, but it’s a risk.

Lenders that CO spoke with were aware of the issue brewing but most hadn’t experienced problems yet as their deals had been teed up prior to the onset of the pandemic and the work from home mandate. “The majority of our deals were lined up, so we haven’t had to navigate that quite yet,” one lender said, adding that “I’ve heard there are problems and so it’s only a matter of time.”

But for now, “I think you’re seeing an immediate slowdown [in deals closing],” Orenstein said. “But if there’s something to push transactions to a grinding halt it’s this. It’s a whole new world and completely unchartered territory.”

Most cities and counties across the country do have electronic filing systems and have found ways to remain relatively efficient and productive during the escalation of the novel virus.

“We have a couple of loans and modifications that are closing as planned, and for the most part e-filings have been utilized. Overnight deliveries haven’t been an issue either,” Ross said. “Policies differ county-to-county, so the delays will certainly be more apparent in smaller counties that don’t offer e-filing and have shut down their offices completely. Closings are certainly being delayed out there.”

“[Los Angeles] County shut down, but they have e-filing, so if you have a title, you have to get it in the queue by 9 a.m. and they’ll work on it that same day and get back to you,” Walker & Dunlop chairman and CEO Willy Walker recently told Commercial Observer. “Santa Ana County [on the other hand] doesn’t have e-filing.”

Efforts have also been made to make the recording processes more efficient to facilitate “virtual” closings. As part of New York Governor Andrew Cuomo’s executive order that went into effect on March 13, the state will temporarily allow for virtual notarization of documents via audio and video, as long as certain conditions are met; the temporary order is effective through April 18. Still, the “virtual” method has come under scrutiny over the potential risk for fraudulent behavior.

In response, Real Estate Board of New York President James Whelan said in a statement released on March 20 that the governor’s order will “shift real estate closing transactions away from traditional person-to-person contact towards a modern, 21st century solution so desperately needed to keep critical parts of our economy moving safely during this time of crisis.”

Walker said that he assumed workarounds would be proactively formulated and implemented to make sure counties don’t grind to halt, “Right now, I’m seeing state and local officials and the private sector figuring out workarounds.”

Correction: A previous version of this article incorrectly stated that Nassau County does not offer e-recording services.