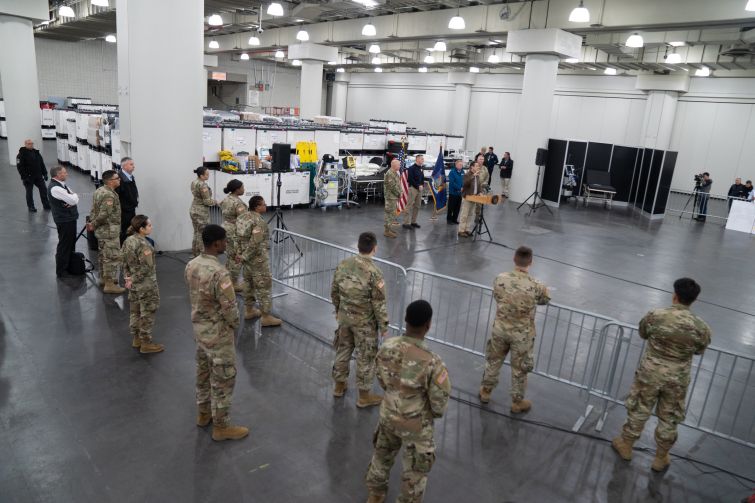 Construction of the four temporary field hospitals inside the West Side convention center is expected to be complete in a week to ten days, the governor said.

Each 250-bed field hospital will occupy roughly 40,000 square feet inside Javits, and the entire facility will be staffed by 320 federal workers. The governor said FEMA is also looking at adding another 1,000 beds for “a lighter level of medical care than you would get in most hospitals,” which would bring the number of hospital beds in the convention center up to 2,000.

“For us, a major thrust is increasing hospital capacity,” Cuomo said during his announcement at the Javits Center. “We’re trying to reduce the spread of the virus and we have to get the hospital capacity up.”

The federal government has shipped 339,760 N-95 masks, 861,700 surgical masks, 353,300 gloves, 145,122 gowns and 197,085 face shields to New York State, some of which are being stored at the Javits Center, the governor said. A large percentage of those supplies will be dispatched to New York City hospitals, while the remainder will go to medical facilities elsewhere in the state.

The rush to find and construct more hospital beds comes as New York State reaches 20,875 positive coronavirus cases, with 12,339 cases in New York City alone, as of this morning.

Gov. Cuomo was already in the midst of expanding the 1.8-million-square-foot convention center—for the second time since it’s been built—at a cost of $1.5 billion. In December, he said the 1.2-million-square-foot expansion would be substantially complete in March 2021.

The state also leased a newly constructed 600-bed nursing home in Crown Heights, Brooklyn to use as a short-term hospital, the governor said yesterday. The Brooklyn Center for Rehabilitation and Residential Health Care was completed last December at 170 Buffalo Avenue, Crain’s New York Business reported at the time. The 280,000-square-foot nursing home replaced St. Mary’s Hospital, which shuttered in 2005 when its parent company, St. Vincent’s Catholic Medical Centers, went out of business and closed its West Village campus.

The Army Corps of Engineers will also construct temporary hospitals with 2,000 additional beds at the State University of New York’s Stony Brook and Old Westbury campuses, and at the Westchester County Center in White Plains.

In an effort to grapple with New York’s fast-growing coronavirus outbreak, Cuomo issued an emergency order today for hospitals throughout the state to increase their capacity by 50 percent.

A fifty percent increase would increase the count to about 75,000 beds, Cuomo said.