The LES Best Thing: The New Development Wave in the Lower East Side 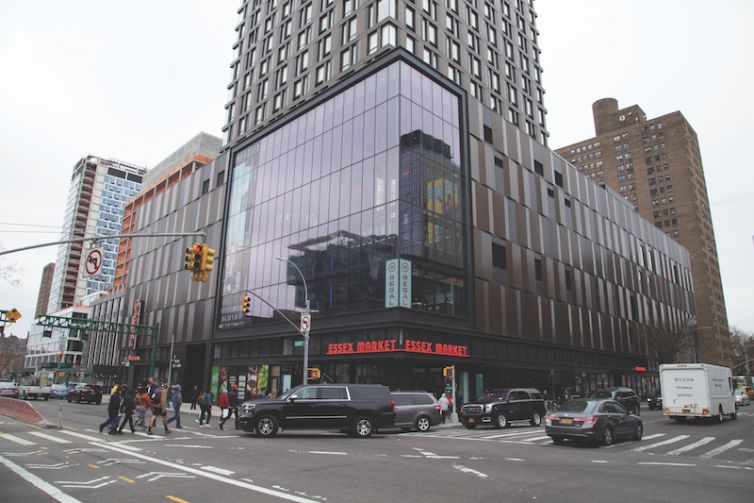 A new breed of Class A office space, like Essex Crossing, are reshaping the creative and buzzy Lower East Side and attracting tenants. Julia Cherruault/for Commercial Observer

The Lower East Side, a neighborhood infamous for cooler-than-thou clothing boutiques, hipster-filled cafes, and (sometimes faux) gritty bars, is certainly not a place associated with a preponderance of Class A office properties. In fact, until very recently, those spaces were virtually non-existent. But, with the first phases of multi-use Essex Crossing now open, plus other large development projects on the horizon, the neighborhood appears ripe for a metamorphosis.

For many who have worked and lived in the area, it’s almost surprising that it has taken this long for the transformation to start. The Lower East Side, bounded by Houston Street, Canal Street, Bowery and the East River, is adjacent to neighborhoods that have greatly outpaced it in terms of commercial development, most notably Soho and Nolita. There’s decent subway connectivity and, perhaps hardest to quantify, it’s always been known as a bastion of cool, from its architecture to its inhabitants.

Gregory Kraut, co-founder and CEO of KPG Funds, recognized its potential as territory for commercial office before many others. His New York-based firm is a value-add owner and operator that purchases architecturally noteworthy Class B and C properties to convert them to more appealing Class A structures.

“We had been noticing that tenants were migrating not just down to Soho, but also to the Lower East Side; to certain areas where, historically, there just wasn’t a lot of commercial office space,” Kraut said. “But, because the transportation is still really good in that area, we thought that it would be a good area for us to start — for lack of better word — gentrifying.”

KPG’s first foray into the neighborhood, in conjunction with East End Capital, is 141 East Houston Street. The project, between Forsyth and Eldridge Streets, is being built on the site of the former Sunshine Cinema, a neighborhood fixture that screened independent and foreign films. When completed in about two years, it will deliver 65,000 square feet of column-free space wrapped in a glass facade. The building will be designed by architecture firm Roger Ferris + Partners, who also helmed The Related Equinox Hotel in Chicago and the RBS headquarters in Stamford, CT.

“There really is no other brand-new Class A office product in the traditional boundaries of the Lower East Side,” said Jonathon Yormak, a founder and managing partner of East End Capital. “Part of the appeal and the allure was to deliver office space to an underserved portion of the city.”

Yormak is hoping that the floor-to-ceiling windows, private terraces, and a concierge service will draw a specific type of tenant to the building.

“We’re assuming it’s going to attract pioneering people; that’s really the best way to put it,” he said. “Someone who wants to have his or her company branded with the hip, cool, progressive, Lower East Side. So, we’re anticipating that it’s certainly likely to be creatively driven companies in one way, shape, or form. But, there are creative companies in every asset class, whether it’s finance, technology, advertising, media, or professional services.”

William Richmond-Watson, owner and CCO of brand and ad agency Watson & Company, is perhaps the type of tenant that 141 East Houston will be looking for when they open. He moved his company from Chelsea to 99 Canal Street, between Forsyth and Eldridge Streets, five years ago. “Because we’re focused on placemaking as a creative agency, we like to be in areas that are more up and coming and I felt Chelsea was getting homogenized,” he said. “I also wanted my team to be among other creatives and fall in love on their lunch break. We relocated to what I believe is the new creative capital of Manhattan.”

Since moving, Richmond-Watson has seen a slew of his contemporaries join him in the neighborhood, from fashion boutiques to curated stationery stores. “All the galleries have since followed us down here from Chelsea. You know what they say about following the art,” he added.

In addition to being surrounded by other creatives, the lower rent as compared to neighboring Soho is also quite attractive.

“Instead of having to spend $100 a foot on Class A office space in Soho, you can now spend $50 to $70, and all you have to do is walk literally five minutes away,” said Kraut. “We’re going to give tenants the same kind of experience, but at a lower price point, which everybody wants.”

But according to Jason Misrahi, COO of Misrahi Realty Group, the discount might not hold for long, especially for boutique spaces: “With the influx of the big office spaces from Essex Crossing, we expect those smaller spaces to increase in value, as people are willing to pay a premium for something unique,” he said.

New development Essex Crossing, near Essex and Delancey Streets, is already making a significant mark on the neighborhood, both from an office and retail perspective. When completed, it will contain over 350,000 square feet of office space, as well an additional 300,000 square feet of retail. The century-old Essex Market has already moved in, and The Market Line, a large, bazaar-like marketplace with over 100 vendors, has opened its first phase and will be fully operational next year.

“It’s exciting, as we are meeting with businesses of all realms who are looking for something different,” said Matthew Weir, senior vice president of commercial asset management at Taconic Partners, one of the developers on the Essex Crossing. “This is not your typical Midtown Manhattan office experience. The company who chooses Essex Crossing isn’t afraid to go against the grain.”

Those who study the LES are already noticing the changes Essex Crossing has made.

“It has had a huge impact on this neighborhood by attracting a new group of new residents, condo buyers, and patrons to its many retail offerings,” said Aaron Gavios, chairman and CEO of Gavios Realty Group. “It’s increased the overall desirability of the neighborhood and the daytime and nighttime foot traffic.”

Misrahi concurs, and is optimistic about the new demographic: “It’s an exciting time to work here and be a part of this changing landscape,” he said. “Office tenants aren’t limited to small spaces anymore, so we suspect to see larger companies moving in, which will help support the local community businesses during the daytime.”

The neighborhood’s retailers are facing the same headwinds as the broader retail environment, with the area’s vacancy rate hitting as high as 15 percent, Gavios said.

Essex Crossing and 141 East Houston aren’t the only two developments moving into the area, either. Eldridge Commons, located at 101 Canal Street between Forsythe and Eldridge Streets, will bring Class A construction to a stretch of the neighborhood that has almost none currently. When completed, it will encompass almost 60,000 square feet of office and retail space, at the particularly buzzy intersection of the LES, Chinatown, and Little Italy neighborhoods. Boutique hotel Nine Orchard, located at 9 Orchard Street between Canal and Division Streets, is also poised to bring a new veneer of sophistication (and more foot traffic) to the neighborhood. Developed by DLJ Real Estate Capital Partners, the completed hotel will have 116 rooms spread across 12 floors.

Retail brokers, like Richard Skulnik, executive vice president and partner at RIPCO Real Estate, are certainly using the proliferation of office space as a selling point for potential retail clients.

“One of the main talking points right now is that a market that didn’t have any office population or any office density, now is going to have all brand-new product,” he said. “Now, companies have a choice: Do I want to be on the Lower East Side?”