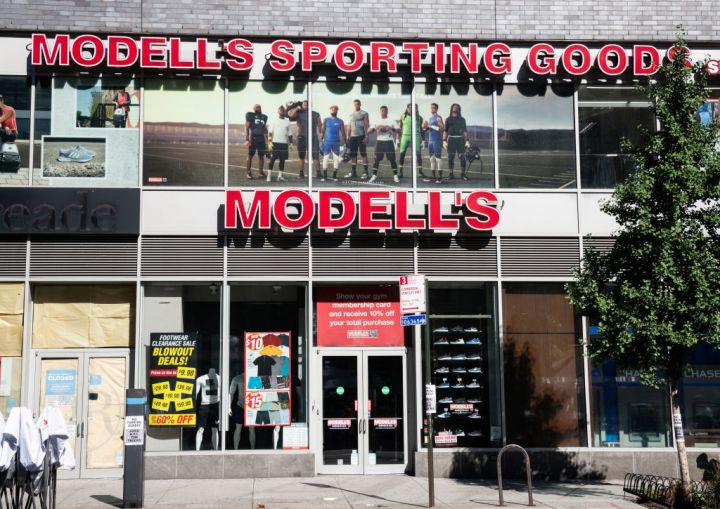 Modell’s Sporting Goods filed for bankruptcy on Wednesday and announced that it was closing all 153 of its stores after CEO Mitchell Modell staged a public campaign begging commercial landlords to lower rents for his stores in a last-ditch effort to save the business. The bankruptcy raises questions about whether the 131-year-old retailer will survive in some form and what company could acquire it.

The sporting goods chain, founded by Morris A. Modell with a shop on Cortlandt Street in Manhattan in 1889, has struggled in recent years as its bread-and-butter business of sports team jerseys and men’s athletic wear declined. Mitch Modell even lent the business $6.7 million of his own money last year. In an interview with Fox Business’s Maria Bartiromo last month, Modell blamed the company’s struggling cash flow on “lousy” local sports teams and a warm winter that had hurt sales of cold-weather gear like boots and jackets. The company, known for its “Gotta Go to Mo’s” jingle, has 3,600 employees across the Northeast and Mid-Atlantic.

In February, Modell announced 32 store closures in the tri-state area and began a public campaign to ask New York City property owners to defer rents for 90 days while he tried to keep the company afloat. He told the New York Post that rent on a Harlem store owned by Thor Equities was “way too high. We told him to work with us or we have to close the store.” He told the paper that he was also trying to restructure leases at 150 and 280 Broadway in Lower Manhattan, at two Upper West Side locations, 795 Columbus Avenue and 348 Amsterdam Avenue, and at three locations in Brooklyn. Modell then claimed earlier this week that he was able to renegotiate leases for 13 of those locations, saving them from shuttering in the short term.

Then, on Wednesday evening, Modell’s revealed that it would liquidate its remaining stock beginning on Friday, March 13, and start the process of shuttering all of its stores over the next seven weeks. While the company began in New York City, it has expanded across the East Coast to elsewhere in New York, New Jersey, Pennsylvania, Delaware, Maryland, Virginia, D.C., Connecticut, Massachusetts and New Hampshire.

“Over the past year, we evaluated several options to restructure our business to allow us to maintain our current operations,” Modell said in a statement accompanying the bankruptcy announcement. “While we achieved some success, in partnership with our landlords and vendors, it was not enough to avoid a bankruptcy filing amid an extremely challenging environment for retailers … This is certainly not the outcome I wanted, and it is one of the most difficult days of my life. But I believe liquidation provides the greatest recovery for our creditors.”

The filing at U.S. Bankruptcy Court in Newark showed that the retailer owed tens of millions to its vendors, including a $9 million debt to Adidas, $8.8 million to Nike, $3.8 million to Under Armour, $1.8 million to Champion/Hanesbrands and $1.3 million to Rawlings Group.

Although Modell’s could simply file for bankruptcy and disappear for good, like fellow sporting goods giant Sports Authority, it’s also possible that the company could be acquired by a competitor, a private equity firm or even one of its vendors. However, retail experts say that the chain may not look like a very good investment right now.

The shopping experience can be a little lackluster at many New York City Modell’s locations, and they show that the company hasn’t kept up with retail trends, said retail consultant Kate Newlin.

“My instinct is that they’ve been trying to cut corners for years rather than investing in a retail experience,” Newlin said. “People who shop in a sporting goods store want information and education and good advice. There’s something very educative and luxe-y about being told, ‘These strings are the best for your daughter on her tennis racket.’ If you’re just going to buy a pair of Nike running shoes, you can do that on Amazon.”

She also said that it didn’t seem like a good strategy to publicly beg landlords for lower rents.

“It’s a form of blackmail to say, ‘These are big stores and it would be tough to lose us, so now give us a break on the rent,’ ” Newlin noted. She added that he hadn’t articulated his vision for the company or how to turn it around in any of his public interviews, which doesn’t exactly inspire confidence for a potential buyer.

“If a private equity company came in and said we’re buying 51 percent of this, they have to decide whether they want to keep the management,” she argued. “Nothing about these articles show that the management has a vision. It’s not an easy acquisition because they don’t have an idea of how to solve the problems. They just want some money to get them through the next 12 pay periods.”

Tom Mullaney, the managing director of restructuring services at JLL, has helped many companies negotiate the bankruptcy process over the past 30 years. He called Modell’s televised entreaties for help “a little unusual.”

“We typically counsel our clients to keep this stuff very close to the vest, because there are unintentional impacts,” like vendors deciding to cut off shipments to a retailer or demand payment upon delivery, which can cause even more liquidity issues, he noted.

Mullaney, who is currently helping Art Van Furniture through bankruptcy, described the process as “a bit of a rugby scrum” of competing interests. “History would suggest it will end up getting closed down, someone will buy the Modell’s Sporting Goods [intellectual] property and become an online provider. A lot of people are going to get hurt.”

Below-market leases typically end up getting auctioned off under bankruptcy court supervision, Mullaney explained, and landlords sometimes have to buy back their own leases to ensure they don’t end up locked into low rents with a new tenant who buys the lease.

James Famularo, the president of the retail leasing team at Meridian Capital Group, said that Modell’s would have to modernize its stores and its online shopping experience to survive. He pointed to Foot Locker as an example of an older brand that was able to use social media and live events in its stores as a way to help stave off financial ruin.

“I think that Modell’s either would be acquired by another company, or they could pivot and really change with the times: do events in stores, maybe close the underperforming stores,” the veteran retail broker explained. “Get electronic, utilize all that’s out there and mesh it together with Modell’s history and brand.”